"North Carolina in Crisis" and Perspectives of Reconciliation

In November of 2011, the North Carolina Museum of History opened the final part of its core exhibit, “The Story of North Carolina.”  The exhibit was the largest ever built in the museum and required years of fundraising and planning.  The exhibit, covering more than 14,000 years of history, was divided into twelve smaller exhibits and told the story of North Carolina by beginning with its earliest inhabitants in prehistory and ending with the radical social/political changes of the 1960s and 1970s.  Between “Living Together” (an exhibit focusing on antebellum economy, politics, religion, slavery, and the larger social order from 1840 to 1860) and “Hope, Fear, and Freedom” (an exhibit highlighting the Reconstruction in North Carolina from the 1865 to 1899) was “North Carolina in Crisis.”  “North Carolina in Crisis” interpreted the American Civil War through the eyes of the North Carolinian people and served as an integral component of the larger historical narrative in “The Story of North Carolina.”  While the exhibit was in some ways still interpretively problematic, it succeeded in conveying the most balanced, complex representation of the Civil War in the museum to date.  More specifically, it characterized a perspective of racial reconciliation that represented a positive interpretive trajectory for the museum.

It is necessary to consider the fact that “North Carolina in Crisis” was never explicitly designed as a standalone exhibit; it was meant to be read in conversation with the surrounding exhibits.  Conceptually, its interpretation depended upon the ability of the visitor to contextualize exhibit content based on previous historical interpretation in “The Story of North Carolina”.  Indeed, provocative topics concerning the institution of slavery and the agency of enslaved African Americans throughout the South were central in the previous exhibit, “Living Together.”  At the heart of the exhibit was a reconstructed slave cabin, used as a focal point to discuss antebellum slave life.  In addition, panel topics included “The Institution of Slavery,” “People as Property,” “The People within the Institution,” “A Slave’s Home,” “Slave Artisans and Builders,” “Resistance and Rebellion,” and “Free Blacks.”  “Living Together” fostered a fundamental understanding that the institution of slavery underpinned the antebellum North Carolinian economic and social structure.  “North Carolina in Crisis” began where “Living Together” ended, describing how the basis of these structures translated into political tensions and eventually military conflict (See Item 846).  The transition, seamless and calculated, meant to forge a direct cognitive link between the institution of slavery and the beginning of the Civil War.

The exhibit began with an introductory video, “Choosing Sides: Loyalty to Country or State?”, which briefly established historical context by providing an overview of the political and social developments that led to secession in May of 1861.  Thereafter, the exhibit progressed chronologically, but skillfully highlighted key thematic points (i.e. soldier life, role of women, African Americans in the war, North Carolina politics, etc.) within certain periods.  These themes, rather than a more traditional battle-centric chronology stood as the driving force of the narrative.  This interpretive strategy perhaps played the largest role in defining many of the strengths of “North Carolina in Crisis.”  Numerous historical agents not highlighted in “Reel to Real” or “North Carolina and the Civil War” found prominence in the exhibit (See Item 759).  Here, exhibit text and artifacts recounting the experience of African American soldiers, North Carolina’s Union soldiers, and industrious women on the home front were integrated with key examinations of state politics and social ideology.  In the construction of such a narrative, visitors were invited to consider the experience of African Americans and women alongside white Confederate soldiers.  And though traces of sentimentalism and apolitical commemoration permeated much of the exhibit text, the language of “sacrifice” and “devastation” equally encompassed North Carolinians white and black, male and female (See Item 762).

Despite this inclusionary perspective, artifacts in the exhibit were predictably heavily weighted toward Confederate representation.  Though prominent Union artifacts were present, like “North Carolina and the Civil War,” much of the exhibit featured Confederate uniforms, weaponry, and battle flags.  This was in part attributable to the nature of the museum collection, but exhibit texts seemed to reinforce the primacy of the Confederate male voice in North Carolina.  One panel highlighting the end of the war was entitled, “The Final Days: North Carolina meets defeat.”  The implication was, of course, that the sense of “defeat” in North Carolina was ubiquitous.  It ignored the fact that for the vast majority of African Americans—a third of North Carolina’s population at the beginning of the war—Appomattox would have spelled the ultimate victory.  Indeed, it was the image of defeat that prevailed in the conclusion of the exhibit, where visitors were presented with a haunting life-size statue of the iconic war widow in mourning, kneeling and weeping in front of a graveyard (See Item 845).  The chronology of the exhibit seemed to reinforce this tendency, framing the war in the classic rallying cry of Lost Cause followers in North Carolina:  “First at Bethel, Farthest to the Front at Gettysburg and Chickamauga, and Last at Appomattox.”  However well “North Carolina in Crisis” framed the experiences of various groups of historical actors in the war, it was clear that such narratives played a secondary role to that of the Confederate North Carolinian. 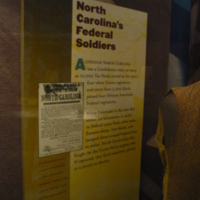 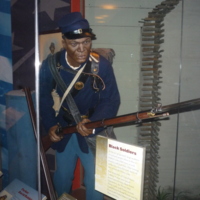 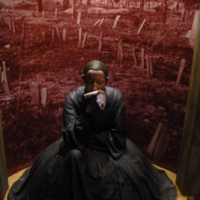 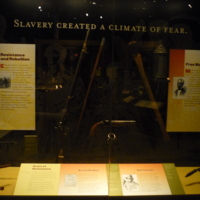