Charlotte Grimes, an elite citizen of Raleigh whose husband Bryan Grimes was a Confederate general, recorded her account of how she and others prepared for the entrance of Sherman’s army in Raleigh, in April 1865. The account was put together in 1918, two years before Grimes’ death.  Grimes, like other women in Raleigh, feared that Sherman and his men would steal personal items like jewelry once they came and started to raid.  Grimes described how she had,  “$200.00 in gold quilted in a belt under my corsets, a stout bag filled with forks and spoons around my waist, and the front of my corsets filled with jewelry,” in effort to hide the items from Sherman and his men. Although she was fearful of what she might lose, she still prepared to show resistance to Sherman and his men. Grimes went a step further than some women and armed herself with a dagger, that her husband had given her. Although Grimes admitted that she might not be able to bring herself to use the dagger, she armed herself just in case. Grimes demonstrated how some women in the North Carolina increased their resistance to the Union cause, by arming herself for the invading army. The image is of Grimes and her daughter.

Charlotte Grimes, "Sketches of My Life," Southern Historical Collection at the University of North Carolina at Chapel Hill.

The night before the Yankees came, a friend, who belonged to Wheeler's Cavalry called and my mother gave him supper. While he was there, the servants came in and said the soldiers were tearing down the garden fence and putting their horses in, so he went out and sent them off. These men were of Wheeler's Cavalry and were a wild lot. This officer remarked to me, "You look more matronly than when I saw you in St. Louis."  There was a good reason for it, as I had $200.00 in gold quilted in a belt under my corsets, a stout bag filled with forks and spoons around my waist, and the front of my corsets filled with jewelry and I looked quite stout. I also had a dagger, though I don't think I would have had the nerve to stick a Yankee. This dagger my husband bought in Milan when traveling in Europe just before the War. I had a pistol also but all arms were sent away as it was said the Yankees would behave worse if they found any arms in the houses.

When Gen. Grimes came home, he made me take the belt off, saying he could not have by back injured for $200.00. I was keeping it for his brother, who said he would have the use of it, if he needed it, and he certainly did need it as he did not have a cent in the world, except a few gold pieces he had carried all through the war. I was so sick the morning the Yankees came I could hardly hold my head up, but was determined they should not find me in bed. I would dress a little and then lie down awhile, get up and dress a little more until finally I finished and went down stairs with the rest of the family.

All of us stayed together for protection, but they did not search the house. All the day before I was on the street trying to get news of my husband so I was worn out with grief and anxiety. Brother Williams Grimes had been over that morning to find out if I had any news of my husband. Both he and my father had heard that he was killed, but they said nothing about that to me. Gen. Schofield and staff took up their quarters at brother Williams Grimes. The Yankees would walk in and ask how many you had in the family and if there were any vacant rooms, would take possession. My father's house was filled with his children and grand-children and my sister, Miss Pettigrew came from the hospital in Richmond and had fever. A Miss Wright in the neighborhood died of typhoid at this time. The many camps of the Yankees polluted the whole atmosphere and many of our friends died.

On Sunday afternoon, a week after the surrender, Gen. Grimes came into Raleigh with his wagon, servant and horse. I must say I was delighted to see him under any conditions, tho' he would reproach me for want of patriotism when I said so, he was so miserable over the surrender himself, but I had suffered so much dread and terrible anxiety, I think there was an excuse for it. Shortly after, came the news of Lincoln's assassination.  That afternoon an Officer came and warned everyone to be careful how they behaved, he said he would double the guard (there was one guard for every two or three houses), that the soldiers were so infuriated at Lincoln's assassination that he feared they would murder the citizens and burn the town. Of course there was no rest under those conditions and we passed a miserable night. After a few days, things seemed more quiet.

The week following, Sherman's troops, numbering 20,000 marched through the town, bands playing, flags flying and making a splendid appearance. Their uniforms were new. Their arms and accouterments burnished and glittering in the sun. Such a contrast to our poor, ragged, half starved, but brave and gallant men. The Yankees issued orders forbidding our soldiers to wear the Confederate uniform, they had nothing else and no money to buy any clothes, so I covered my husband's brass buttons with black, in mourning for the Confederacy, he said. He wished to go to his farm at Grimesland. It was necessary to have citizens clothes and there was no money to buy them. I had several colored silk dresses that I did not wear, as I was in mourning, and sold enough of these to raise $100.00. I insisted upon his taking this to buy a suit of clothes. It seemed to hurt him to use this money, but I would take no denial. 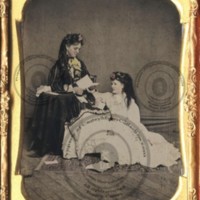