The Ballots and the War: the Final Month of the Election 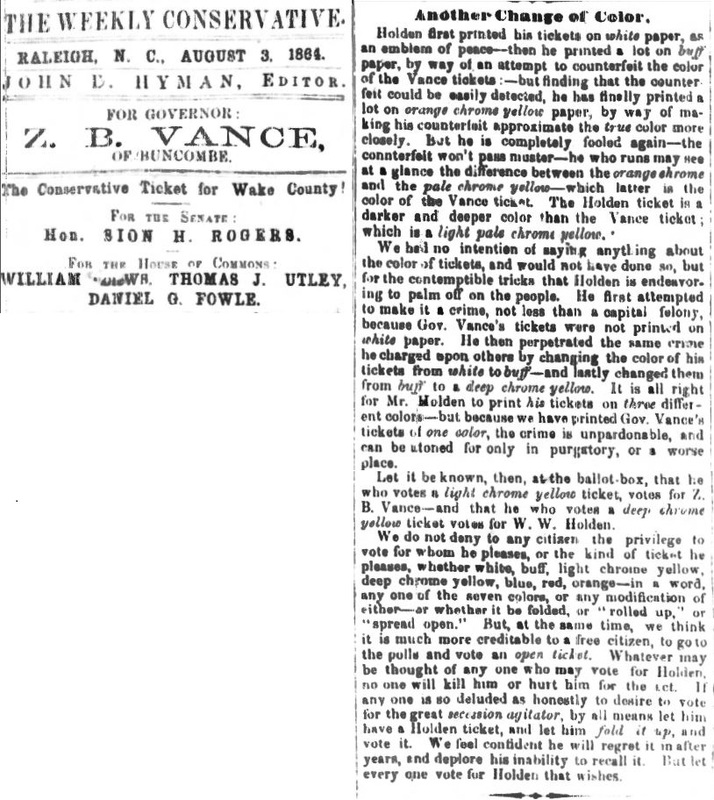 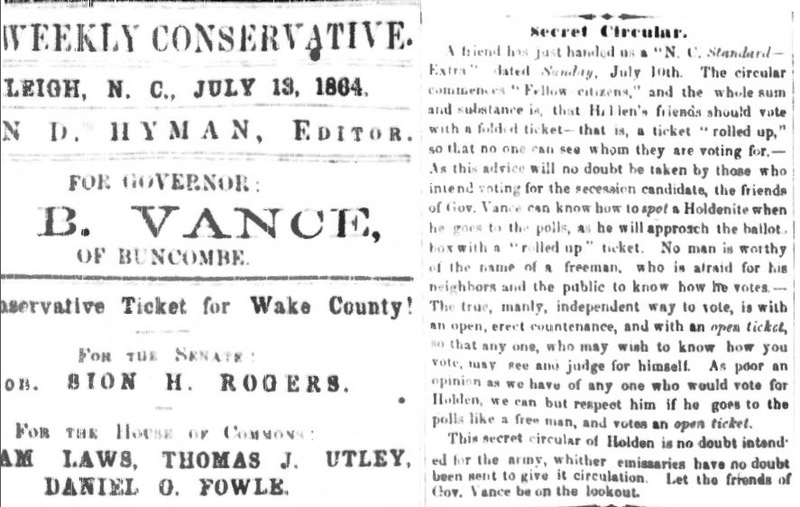 This section will focus on the events which took place during the last month that shaped the outcome of the gubernatorial election while paying close attention to the ideals of Confederate honor and nationalism and how they were molded by these events. First, keeping an eye on the domestic political front, a series of very interesting articles released by the Weekly Conservative followed a trend of voter manipulation and political tactics that demonstrated the extent of which Vance was willing to go in order to win the 1864 election. This series of articles began with one titled “Secret Circular,” which was centered on the discovery that Holden had released a secret newspaper to the soldiers. In this circular, it was revealed, Holden told people that if they wanted to vote for him, they should roll up or fold their ballot when going to place the slip into the ballot box; this way no one would be intimidated by Vance’s supporters when casting their ballots.[1] Not only did the Conservative respond with the claim that hiding a ballot was dishonorable, Vance’s administration immediately changed the color of their ballots as assurance that people would be able to determine the difference between a Vance ballot and a Holden ballot.

While Holden’s administration made two attempts to replicate the color of Vance’s ballot, first by using buff colored paper, then switching to a pale yellow chrome color, their attempts remained unfruitful as the Weekly Conservative article “Another Change in Color”claimed neither attempt matched the deep yellow chrome color of Vance’s ballot.[2] Even though the article expressed the belief that no one would inflict harm upon an individual who voted for Holden, the very fact that the newspaper has to explicitly say that implies the fact that there was a fear of voter intimidation. Thus, this series of articles proves that Vance was willing to go to extraordinary ends in an attempt to assure his victory over Holden and secure his Confederate peace.

In supplement to the influence of the political battle that was raging between Governor Vance and Holden at home, the events that transpired on the frontlines of the war further encouraged white men to vote for Vance. As Gordon B. McKinney points out in his book on Zebulon Vance, Jubal Early, a General for the Confederate army, led a successful raid against the Union from July 6 thru the 12th, which brought him within striking distance of Washington.[3] These victories, McKinney pointed out, boosted Confederate nationalism among the soldiers and the people back home, giving them hope that the war was nearing its last breath and soon the Union would recognize the independence and sovereignty of the Confederate States.

Putting this new boost in Confederate morale back into the perspective of the election, which by July was nearing its end; Early’s victories had pushed those who were still on the fence concerning the war effort to believe that the war could be won for the Confederacy.  Therefore, Vance’s declaration for an honorable peace, that is, a peace in which the Union would respect the Confederacy’s independence from the United States and forfeit the war, became a realistic possibility. Since Vance’s just and honorable peace had become more possible than ever before during the civil war, anyone who would have protested against the war at this point, Vance’s supporters could argue, were not honorable individuals. Thus, the victories on the home front perpetuated a sense of honor that came with voting for Vance while making votes for Holden appear dishonorable.

The combination of Vance’s attack on Holden’s changing ballot colors with the boost of Confederate nationalism in July of 1864 led many white men, both in the army and back home, to feel as though a vote for Holden would be dishonorable and weak. When understanding these pressures coming from the frontlines and domestically, it was not a surprise when the ballots came in from the soldiers in late July and the civilians in early August that Vance had won a landslide victory over William Holden. Anyone who would have been seen voting with a Holden ballot would have been publically labeled weak and dishonorable.

← Man of War
Conclusion: The Election Results of 1864 →
The Ballots and the War: the Final Month of the Election