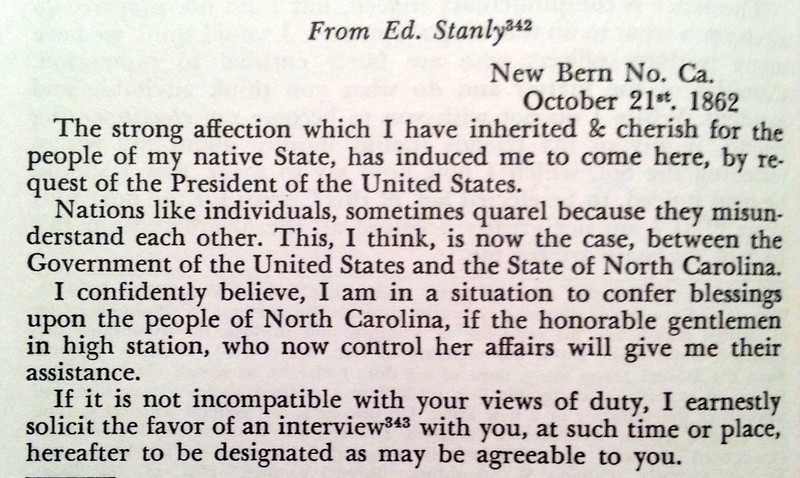 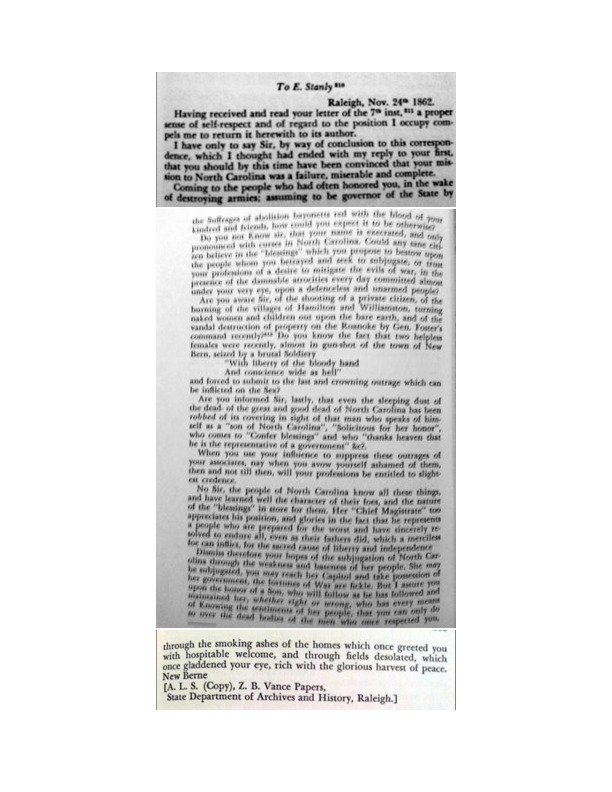 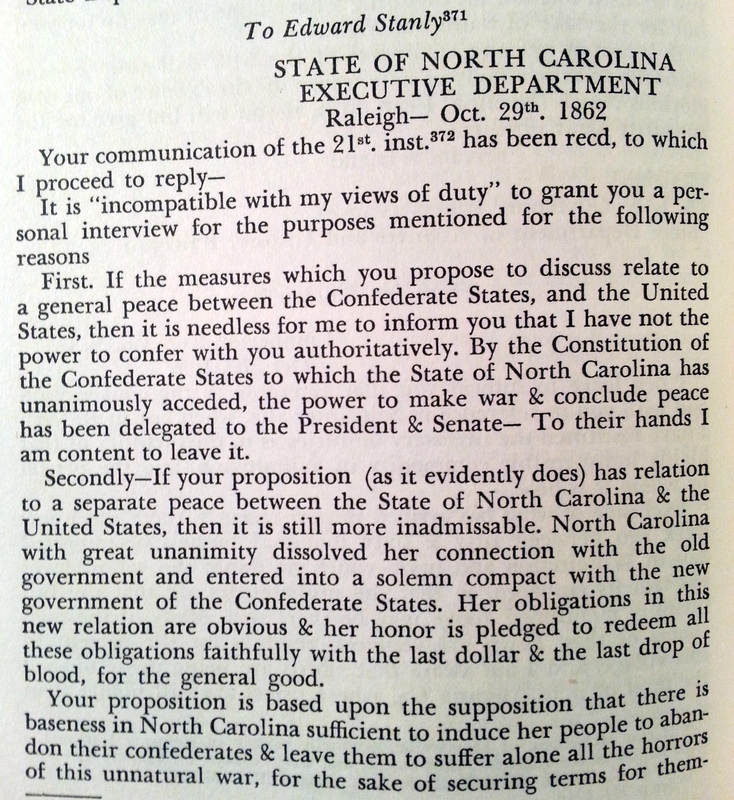 In 1862, the Union’s president, Abraham Lincoln, appointed Edward Stanly to be the military governor of Union controlled Eastern North Carolina. Stanly’s agreement to take the role of military governor had brought him back to his home state of North Carolina after he had spent the previous nine years on the opposite side of the country, fighting for a place in California’s state government. While Stanly’s political experiences in California and ancestral ties back home made him a suitable candidate for provisionally governing Eastern North Carolina, his distance from North Carolina over the previous decade meant that he been alienated from the full force of disaffection between the Confederacy and the Union going into the Civil War.

Seeing as how Stanly had no experience in dealing with Confederate nationalism and their ideals of honor, an analysis of his correspondences with Confederate governor Zebulon Vance, between October and November in 1862, will provide an excellent case study for a Confederate nationalist’s perception of an “honorable peace.” It was in the first of these correspondences that Stanly, who had been in California since 1853, ignorantly requested a meeting with Vance in the hopes to broker a peace treaty that could satisfy the North Carolinians, end the incessant bloodshed, and bring his home state back into the Union fold.[1] However, it quickly became clear to Stanly via Vance’s fiery response that the emotions for the Union truly had grown sour since 1853 as Vance labeled Stanly a traitor against his native state, whose name is “only pronounced with curses in North Carolina” because he was willing to shake hands with the Union and forsake the philosophies of Confederate nationalism which he believed every “son of North Carolina” should maintain.[2] These statements were clearly meant to strip Stanly of any honor that he may believe he held in North Carolina.

In addition to Vance’s slanderous statements aimed at striking down Stanly’s honor, within Vance’s first response to Stanly’s letters, the Confederate North Carolina Governor associated his reasons for rejecting Stanly’s appeal to a question of honor. Specifically, Vance concluded in regard to North Carolina that “her honor is pledged” faithfully to the Confederacy’s will until “the last drop of blood, for the general good;” therefore, Vance argued, there was a consensus among the people of North Carolina not to “abandon their confederates and leave them to suffer alone all the horrors of this unnatural war.”[3]  It is to be understood, following Vance’s logic, that the honor with which Confederate nationalists stand firmly upon could have only be protected by continuing the war, even if it meant total ruin.

In addition to the zesty remarks made on both sides of these epistles, Vance clearly stated his position to acquire an honorable peace with the Union; it was to be done through the Union’s recognition of the sovereignty of the Confederate States. In addition to his rejection of Stanly’s peace offering, Vance exclaimed some convincing conjectures that aligned with his previous contrast of Confederate honor against the disgraceful actions of the Union. These evidences included recent events where Union soldiers had murdered a North Carolina civilian, vandalized private property upon the Roanoke River, burnt down the villages of Hamilton and Williamston, and raped two women who were “almost in gun-shot of the town of New Bern,” the city in which Stanly resided.[4] While it is important to remember that, as with almost any situation in history, atrocities were committed on both sides; Vance’s reports in his letter were obviously stated with the position of a Confederate nationalist concerned with promoting Confederate honor.

From Vance’s perspective, to give in to the Union’s requests would bring dishonor to the men and women in North Carolina who had been affected by the Civil War. Vance saw the Union and its countrymen as subjugating savages whose sol desire in Reconstruction would be to dictate and destroy the Southerners way of life. According to his beliefs, he claimed, “he represented a people who are prepared for the worst and have sincerely resolved to endure all, even as their fathers did, which a merciless foe can inflict, for the sacred cause of liberty and independence.”[5] Following Vance’s line of thinking, the only answer to peace that remained analogous with the Southerners’ ways of life could not be separated from the recognition of the Confederate States as a separate sovereignty. It was for these reasons that Vance was willing to go through any reasonable means necessary in order to achieve his vision of peace, which was married to Confederate independence, while preventing the rise of re-unionism among North Carolina citizens.