The End of a Term and Rise of Dissent 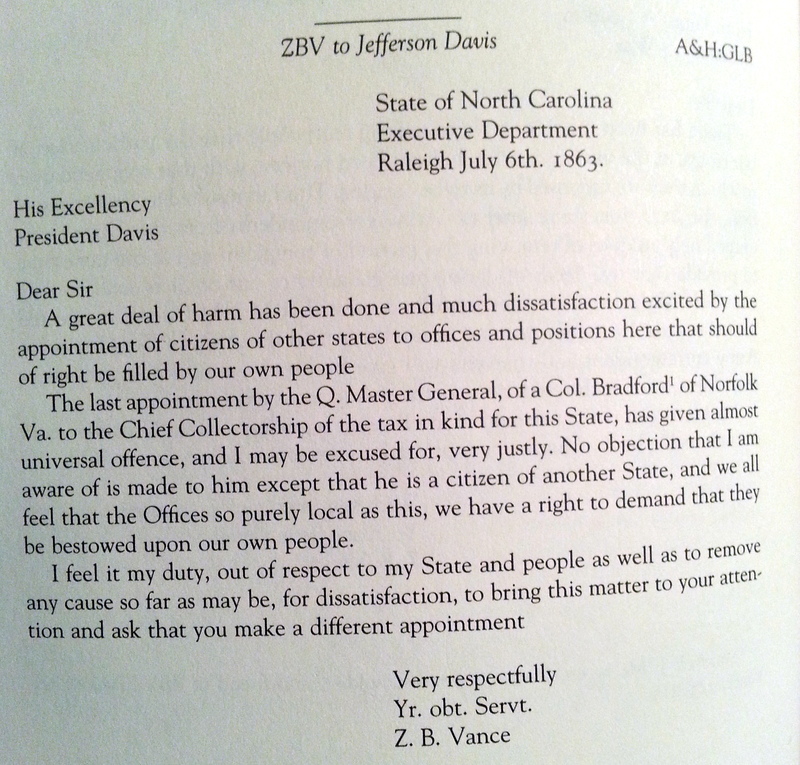 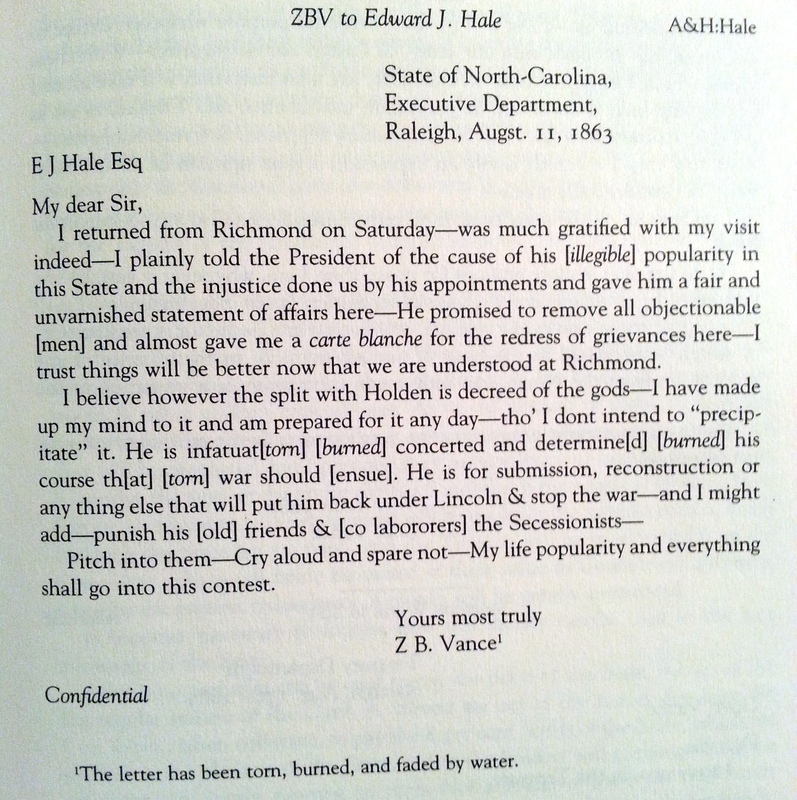 Governor Vance’s correspondences with various individuals such as William A. Graham, Edward J. Hale, John H. Haughton, and President Jefferson Davis in late 1863 set an important starting point to understand the supposed shifting allegiances of North Carolina’s constituency. Within these epistles, Vance addressed the many issues that the worried the people in North Carolina were expressing in the year leading up to his reelection campaign, which resulted in people dissenting from the Confederacy. These dissenters, by 1863 were forming large groups in protest to the Confederacy’s involvement in the Civil War, which led many politicians in the North and South to believe North Carolina was on the verge of seceding.[1] Therefore, Vance believed, the threat posed by these dissenters should be taken seriously and treated as a valid threat to Confederate sovereignty.

In his explanation, Vance looked to President Davis for executive support in quelling the issues brought forth by “the appointment of citizens of other states to offices” in North Carolina, the increasing pressures of tax in kind laws, and the suspension of the writ of habeas corpus.[2] However, while Vance claimed he got a “carte blanche” from the president to address these issues, in Davis’ written responses, it appears the president did not actually approve changing any of the policies at hand and instead pushed Vance to defend Confederate national honor and clean up the mess being perpetuated by the rise of these dissenters.[3] This became Vance’s mission throughout the coming year.

The key element to bring out in regard to the problems going on with the dissenters would be to examine how these North Carolinians’ disaffection for the wartime laws of the Confederacy tied directly to people striking peace movements across the state.  Vance clearly stated evidence to support this argument in two letters, one to William A. Graham and the other to John H. Haughton. Additionally, as if to drive the point home in his letter to Graham, Vance plainly defined and contrasted his desire for peace with the calls for peace that were coming from the dissenters. Then, in one final note dealing with these letters, by the end of 1863 Vance was beginning to view William W. Holden, the editor of the North Carolina Standard and the voice of the dissenters, as his political enemy just prior to Holden’s announcement that he would run against Vance in the gubernatorial election of 1864.

[1] Wilfred B. Yearns Jr., “The Peace Movement in the Confederate Congress,” 7.