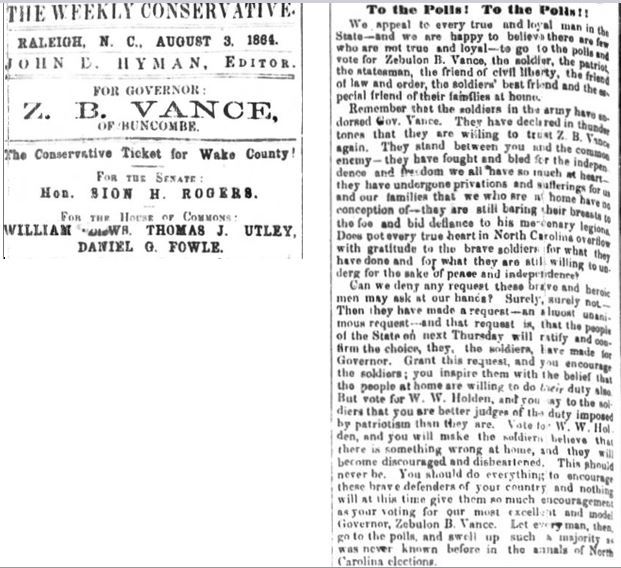 In addition to Vance’s support of the Confederate nationalists’ definition of an honorable peace, this section will cover the imperative understanding of the connection between Vance’s philosophy of an honorable peace and his support of North Carolina’s armed forces. Leading into the election year of 1864, William W. Holden and Zebulon B. Vance both demonstrated themselves as men who supported the war in their election campaigns as a way of gaining the approval of the North Carolinian troops. This was an important endeavor as the North Carolinian soldiers produced a considerable proportion of the voting class. However, it is important to note that Vance’s argument for the support of troops differed greatly from Holden’s perspective of supporting the soldiers. Vance’s outlook was founded in the need to improve Confederate nationalism in a state with the largest number of defecting soldiers.

While it may be obvious that Vance was for the war, considering he believed the only feasible route to peace was through the battlefields, it is essential to understand the publicity which Vance exhibited to show his support for the Confederate soldiers. In Vance’s newspaper, the Weekly Conservative, there are two articles that pay special attention to the soldiers, the July 27 article, “Gov. Vance and Mr. Holden – A Contrast,” and an August 3 article titled, “To the Polls! To the Polls!!” In the July 27 article, Vance portrayed himself as a friend to the soldiers as when the war started, he joined the war effort and went on to fight until he was needed to serve in his government.[1] In this way, soldiers would supposedly be able to consider Vance to be someone who understood what they are going through on the battle field. In a combination of newspaper articles and speeches delivered to the frontlines Vance was very successful in making himself out to be the friend of the soldier as in the end, Vance had won the vast majority of military votes.

In a stark contrast to Vance’s success at appearing to be the soldier’s best ally, Holden was not successful at preventing Vance from portraying him as an instigator of war and an enemy to North Carolinians. In a July 20, 1864 Weekly Conservative article, “Secession and Civil War,” Vance pointed out that Holden had originally supported the secession movement and Vance further claims that Holden’s peace rallies were actually “a most wicked and damnable project, which, if successful, will ‘precipitate’ us into another revolution.”[2] While Vance’s claims against Holden from an outsider’s perspective seem to be unorthodox, especially considering the fact that Holden was running on a peace platform, it seems as though people actually believed Vance’s allegations as not only did many of his contemporaries express these fears but then he also won a vast majority of the soldiers’ votes after the ballots came in in August.

← Man of Peace
The Ballots and the War: the Final Month of the Election →
Man of War