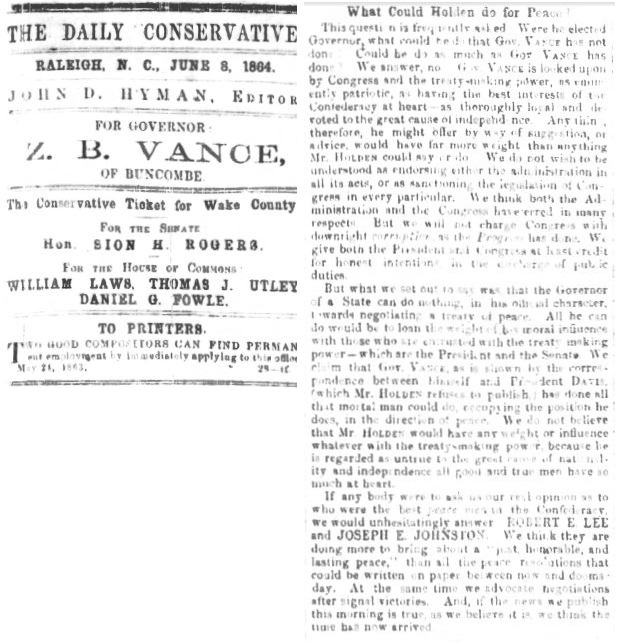 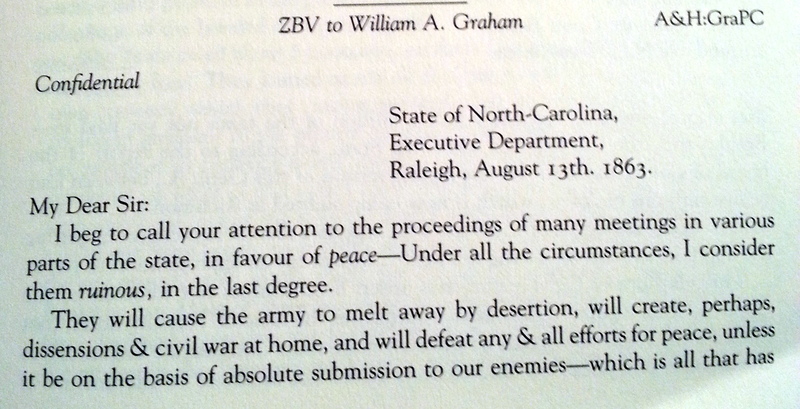 Leading into the election year of 1864, William W. Holden and Zebulon B. Vance presented themselves as men of peace in their election campaigns to gain the approval of North Carolina voters; however, as will be recognized in this section, the perspective of a “just and honorable” peace that was proposed by Vance differed greatly from that of Holden’s. This can be observed through the evidences of correspondences as well as newspaper articles from the North Carolina Standard and the Daily/Weekly Conservative newspapers. The combined momentum of the Unionist sympathizing Reconstructionists and the fruition of Holden’s peace movement resulted in a remarkable pivotal shift as the November 1863 congressional elections in North Carolina saw eight out of the ten elected congressmen in North Carolina now favored some form of peace negotiations.[1] Therefore, by the end of 1863, North Carolina’s constituency favored the stance of Holden’s peace movement, electing to abandon the Confederate war cause in hopes to find a way out of the bloody Civil War through a reunification with the North. This movement ran directly opposite to the Confederate nationalists’ honorable peace ideals, which only favored ending the war when assured independence from the Union.

Following Holden’s peace movement, Vance, who supported the Confederate nationalist perspective of achieving an honorable peace, wrote a letter in secret to President Jefferson Davis on December 30, 1863, urging him to request peace talks with the Union. While this letter, at first glance, could trick a reader into believing Vance was supporting Holden’s peace movement, it becomes clear upon further inspection that he had no confidence whatsoever that the negotiations would lead to any peace. Instead, Vance argued, the rejection of a peace treaty by the Union would “greatly strengthen and intensify the war feeling and will rally all classes to a more cordial support of the Government” and individuals who once supported Holden’s movement would feel as though all hope for reconciliation was lost, leading to a deflation in Holden’s support.[2] However, President Davis shot down Vance’s plan while once again warning Vance of the dangers that Holden’s peace movement could have on the Confederacy.

Even though Vance’s plan was denied by the Confederate government, a few months later Vance published his letter to President Davis in the Weekly Conservative newspaper as an attempt to show the North Carolina people that he had tried convincing the government to commence peace talks with the Union. However, if Vance, being well known for his support of the war, had no effect on the actions of the Confederate hierarchy, then, he argued, Holden and his peace-men would never stand a chance.[3] Instead, Vance theorized, as he summed up in his August 13, 1863 letter to William A. Graham, “No living man is more anxious for peace than I am, whenever it can, by any possibility, be obtained upon the basis of separation & our independence.”[4] In this letter, Vance clearly defines the ideals of the Confederate nationalists’ perspective of an honorable peace as an action that could only be concluded by the separation and independence of the Confederate States.

[1] Joe A. Mobley, “To Their Hands I am Content to Leave it,” in War Governor of the South: North Carolina’s Zeb Vance in the Confederacy(Gainesville: University Press of Florida, 2005), 108-109.