From Enslaved to Freed People 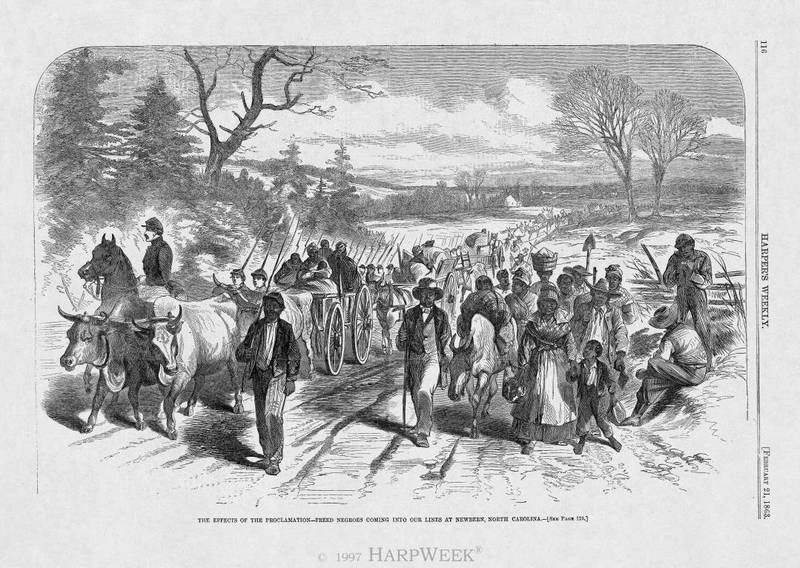 Item 1732. Effects of the Proclamation, Freed Negroes Coming Into Our Lines at New Bern, North Carolina

It was not until Union General Ambrose R. Burnside led an expedition by sea and captured parts of eastern North Carolina that “significant numbers of black North Carolinians” would have the opportunity for freedom “or be able to join the Federal army.”  (Reid 2008, 1)  An illustration entitled “Effects of the Proclamation, Freed Negroes Coming into Our Lines at New Bern, North Carolina” that appeared in Harper’s Weekly in 1862 illustrates the exodus of former slaves from their old plantations and homes into Union lines.  (Item 1732)  As this illustration shows, Union occupation of Eastern Carolina coupled with the Emancipation Proclamation that freed all slaves in the states of the rebellion caused many enslaved men and women to find their way into Union lines.  As historian Judkin Browning points out: “When Union soldiers began arriving in the spring of 1862, African Americans in the region recognized that they had been presented with a golden opportunity to throw off the chains of slavery and embrace the independence they had long desired.”  (Browning 2008, 74)   The Union occupation of eastern North Carolina opened a door for slaves and made the dream of freedom a serious reality for both the 68,519 slaves in the coastal region of North Carolina and the countless inland slaves who saw freedom right across Union lines. (Dobak 2013, 300)

As Union occupation began, slaves began to enter Union lines to attain that freedom.  As a discharged black soldier relayed in a letter to the Freedmen’s Bureau after the Civil War, he was “A Slave up an Tell the manspation.”  This soldier’s name was Charles Jones and once the Union Army began occupation of Eastern North Carolina, he fled to New Bern.  Before Emancipation was officially proclaimed, Jones found himself, along with many other slaves, “in protection By the youion Troops an Sat free by Presadence Lincon at the manspation I think in 1863 if I mis Stake not.” (Item 927)  Former slaves, like William Henry Singleton and Charles Jones, entered Union territory uncertain of their future, but certain of the harshness of the institution of slavery that they were leaving behind. 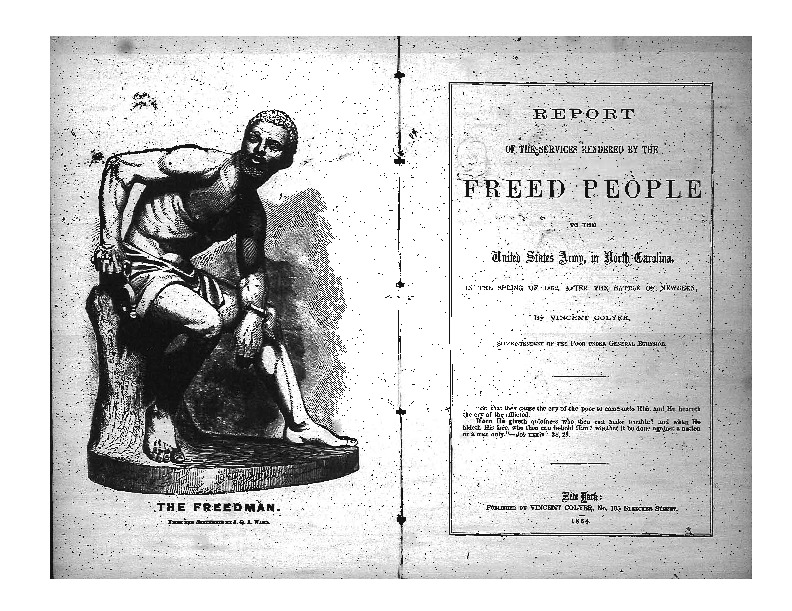 Item 984.  "Report of the Services Rendered by the Freed People to the United States Army in North Carolina," 1864

As Vincent Colyer, the superintendent for the poor in New Bern after Union occupation, recalled in his Brief Report of the Services Rendered by the Freed People of the United States Army in North Carolina:

"A party of fifteen or twenty of these loyal blacks, men, women and children, arrived on a ‘Dingy’ in front of the General's Head Quarters, where my tent was located. They came from up the Chowan River, and as they were passing they had been shot at by their rebel masters from the banks of the river, but escaped uninjured. They were a happy party, rejoicing at their escape from slavery and danger, and at the hearty welcome which was at once extended to them, by the officers and men of the New England regiments, which chiefly made up the corps under Gen. Burnside's command." (Item 984)

Colyer documented the often dangerous flight of enslaved men and women into Union territory and the subsequent joy of finally reaching their destination and freedom.  A Union officer expanded on this joy these men and women were experiencing when he said, “The slaves alone seemed rejoiced at our coming and looked upon our victorious banners as signs of their approaching millennium.”  (Browning 2011, 83-84)  The happiness, hope, and relief that one felt as they were crossing the threshold from degradation, exploitation, and bondage into Union lines that brought freedom, autonomy, and hope cannot possibly be comprehended by anyone who has not been in that situation themselves, but one can speculate that this experience was extremely moving and uplifting to a group of people.

From the slaveholder’s point of view, additional evidence of this flight of slaves can be seen in a letter from a North Carolina slaveholder to the Commander of the Department of North Carolina in 1862 inquiring about his “two carpenters” that “refused to be hired & have gone into the Federal lines.” (Item 991)  This was an example of just one of many slaveholders that experienced the flight of their slaves when General Burnside led his army into North Carolina.  Slaveholders, like the author of the letter mentioned above, relied on the work of enslaved men and women to do everyday tasks.  The slaveholder says that “for the last two months I have supported my Family by the hire” of the two men that ran away.  (Item 991)  When the Union army came into North Carolina and enslaved men and women began fleeing, the labor source of many slaveholders began to crumble, resulting in similar letters hoping to inquire about their “carpenters” who had fled.

General Ambrose E. Burnside to the Secretary of War, March 21, 1862

Evidence of slaves flight to freedom can also be seen from the Union perspective in a letter from the Commander of the Department of North Carolina, General Burnside, to the Secretary of War where he described the slave refugees that he came into contact with in eastern North Carolina as “wild with excitement and delight,” but they were “a source of very great anxiety to us; the city is being overrun with fugitives from surrounding towns and plantations.”  Burnside commented on the influx of slaves flowing into the Union lines “through the woods & swamps from every side.”  (Item 1731)  Statistics show that “17,419 blacks lived under Union protection in eastern North Carolina,” and New Bern specifically “became home to nearly 2,500 blacks by January 1864 and nearly 11,000 a year later (as compared to about 3,000 blacks in 1860.)”  (Browning 2011, 88)  As shown by General’s Butler’s observations and the figures above, the flight of enslaved men and women into Eastern North Carolina reached a large scale.  With this increased arrival of former slaves, the Union army had to create a policy for dealing with these people that were fleeing to their protection, and the idea of allowing these former slaves to enlist in the army, or just merely assist the army in numerous ways, started to circulate and catch fire, but not without opposition.

Slaves were instrumental in contributing to their own emancipation.  As Ira Berlin points out, “By abandoning their owners, coming uninvited into the Union lines, and offering their assistance as laborers, pioneers, guides, spies” and soldiers, as will be discussed next, “slaves forced federal soldiers at the lowest level to recognize their importance to the Union’s success.”  (Berlin 1997, 30)  By choosing to flee toward Union lines and assist in different ways to the war effort, enslaved men and women had an important hand in breaking their own shackles that held them in bondage.  One significant way in which African Americans helped the Union was through enlistment in the army.