Commander of the Department of North Carolina to the Secretary of War, May 5, 1863

Item 2697. Commander of the Department of North Carolina to the Secretary of War.

Despite opposition from white Northerners or Southerners, many of the former slaves that came to New Bern and the surrounding coastal area began to explore the option of fighting along with the Union army against the Confederacy and the institution that formerly held them in bondage.  In a letter to the Secretary of War, Major General J.G. Foster discussed the idea of raising colored troops to fight on behalf of the Union and “the times and circumstances under which [he] armed and used Negroes” in his department.  In regard to an attack on Washington, North Carolina, Foster said: “…the Negroes applied to me for Arms, and to strengthen my lines I armed about 120 all I had arms for, they did their duty well and seemed willing to fight, the test was not applied of course.”  Foster explained to the Secretary of War, Edwin M. Stanton, that:

"Again, here at this Post, I received a petition signed by about 120 Negroes, for arms and organization in the U.S. Service, I replied that if names or promises could be received from enough to constitute the nucleus of a Regiment, I would consider the matter and be prepared to take action on it, since then officially I have heard nothing, but unofficially hear that not more than about 300 men or names were obtained." (Item 2697)

This evidence demonstrated that even before the Union army began officially recruiting former slaves to become soldiers, some of these men began taking it upon themselves to organize for some sort of service to the Union Army.

William Henry Singleton very well could have been one of the formerly enslaved men that Foster discussed above who signed a petition for arms and organization in the U.S. Service.  Once this former slave escaped into Union lines, he made his way to General Burnside’s headquarters and secured employment as the servant of Col. Leggett of the 10th Connecticut Regiment. Singleton was then used as an aide to the Union Army; for example, he laid out a route for General Burnside that would be the best way of reaching Confederate forces.  After that, Singleton took money that he made being a scout and guide for the Union army and began raising a colored regiment in New Bern, North Carolina.  In his autobiography, he recalled: “I secured the thousand men and they appointed me as their colonel and I drilled them with cornstalks for guns.  We had no way of getting guns and equipment.  We drilled once a week.  I supported myself by whatever I could get to do and my men did likewise.”  Singleton claimed that he spoke to both General Burnside and President Lincoln about how he had a thousand men that wanted to “fight to free [their] race,” but it wasn’t until after the Emancipation Proclamation, on May 28, 1863, that James C. Beecher came to North Carolina and took command of this regiment. (Item 895)

Even before official policy was set out to allow for the enlistment of black soldiers, Singleton and his men took the initiative themselves to take up arms and fight for the freedom of their race on the side of the Union.  This fact becomes even more intriguing when examining the war strategy by Lt. Gen. Ulysses S. Grant in the final years of the Civil War which was to employ “his overwhelming superiority in manpower to defeat the Confederacy” by mobilizing “every available man, apply pressure on all fronts, and stretch the Confederacy to enable forces” to break up Confederate commands.  (Glatthaar 1992, 297)  This strategy faced problems when it relied on regiments being filled with soldiers at a time in the war when the Union was war-weary and the flow of new soldiers was not at its highest.  This strategy ended up succeeding. Historian Joseph Glatthaar argues that much of this success was due to increasing number of African Americans who fought on the side of the Union in the latter stages of the war, making “critical contributions” to the “defeat of the confederacy.”  (Glatthaar 1992, 298)  Former slaves like Singleton, who fled to New Bern and began to raise arms even before official policy was set for black enlistment, did so at a critical time, when much of the North was war-weary and not looking to engage more men in combat.  Through examining the autobiography of William Henry Singleton and the work of Glaatthaar on African American contributions, it becomes clear that men like Singleton greatly contributed to the Union victory because they were ready to fight when, and even before, the Union needed them the most. 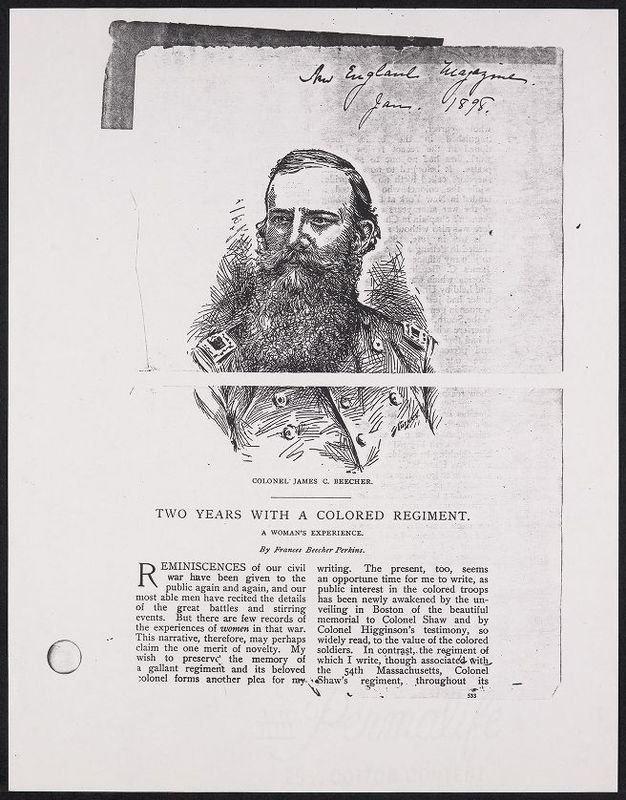 Singleton’s initiative evolved into a regiment that would be called the First North Carolina Colored Volunteers and would later be known as the 35th Regiment, United States Colored Troops.  As the wife of James C. Beecher wrote in her article, the First North Carolina Volunteers was one of “the first colored regiments, raised at a time when the nation’s prejudice against employing the negroes as soldiers had yet to be overcome. It was recruited in New Bern, N. C., about a year before by Colonel Beecher himself, from the slave population of that region.”  (Item 985)  It was men like William Henry Singleton and like Maj. Gen. Foster discussed in his letter to Edwin M. Stanton that pushed the Union Army to actually recognize the freed people rushing into their lines as possible assets and allowing them to fight in an organized regiment, and thus recruitment began.