The policy regarding African Americans and whether or not they could enlist and serve in the Union army drew its roots from the First and Second Confiscation Acts.  The First Confiscation Act made all property, slaves included, used in support of the rebellion "subject of prize and capture wherever found."  Similarly, the Second Confiscation Act “declared slaves owned by disloyal masters ‘forever free of their servitude.’”  Furthermore, President Lincoln issued an executive order that authorized Union military commanders to seize slaves for military use.  As historian Ira Berlin explains, “By the late summer of 1862, black men in large numbers…were already laboring for the Union army and navy.  Military labor offered thousands of black men an opportunity to escape slavery and gain the protection of the Union army.” (Berlin 1992, 21-43)  On January 1, 1863, President Lincoln issued the Emancipation Proclamation that freed all slaves in the states of the rebellion.  Soon after, in early 1863, official orders to recruit African Americans to be soldiers in the Union Army came when the War Department organized the Bureau of Colored Troops.  (Dobak 2013, 9-10)

Order by the Commander of the Department of Virginia and North Carolina, 1863

Item 2699. Order by the Commander of the Department of Virginia and North Carolina, 1863. 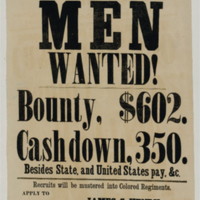 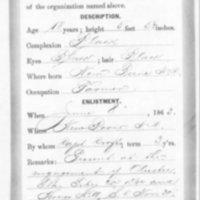 In General Order No. 46, General Butler of the Union Army set out an official policy regarding the freedmen: “The recruitment of colored troops has become the settled purpose of the Government.  It is therefore the duty of every officer and soldier to aid in carrying out that purpose.”  (Item 2699)  Item 2698 is an example of a recruitment poster that could have been seen on the streets of New Bern calling for “Color’d Men” that would join the Union Army and be “mustered in Colored Regiments” with an expected bounty of $602 and a cash down payment of $350.  The Civil War Service Records indicate that many of the men that made up the 35th USCT, for example the service record of Charles Jones, enlisted in New Bern.  (Item 2700)

This is a radical point in history that should not be overlooked.  Men that were born as slaves into an institution that facilitated the autocratic control for slaveholders to treat them as property with no rights at all, suddenly found themselves in Union territory being offered the opportunity to receive money to fight against the very institution that had previously enslaved them.  Many former slaves in New Bern, North Carolina, hadn’t even donned an official Union uniform, but they already made impressive gains toward their personal autonomy and racial advancement.  Furthermore, some historians even point to the participation of African Americans in the army as playing an important role in the Union victory.  As Glaatthaar points out,  “when the picture for the Lincoln administration looked bleakest and the Union desperately struggled to maintain its uniformed strength, more than 100,000 blacks were serving in the Union army” and “their presence enabled Grant to embark on a course that promised the greatest hope of Federal victory.”  (Glatthaar 1992, 298)  In these ways, African Americans both contributed to the war effort and advanced their personal autonomy through their enlistment and participation in the Union army.