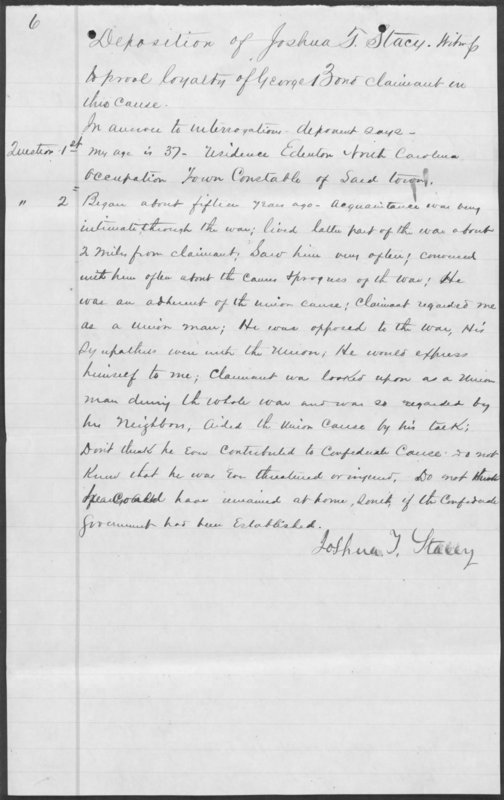 One of the most stunning incidents had to involve the temporary occupation of Edenton. When the Union forces landed, fresh from their battle at Roanoke Island, they were greeted by a man by the name of James Norcum. Apparently upon hearing of the impending arrival of Union forces, the Confederates in town packed up and fled, including a token Confederate military force. The Union sympathizers remaining appointed Norcum as their liaison, and he guided the Union detachment through town where they seized materiel and left. What is intriguing about this case is that though the town had a sizable Confederate presence and presented a clear strategic point of interest given it's commanding geographic position and that it served as a center of power damages to the town itself were fairly light. This could be attributed to the policies of Burnside at this time, the general commanding the Union campaign in the eastern portion of North Carolina (started because they correctly saw the region as a lightly defended access route to Lee's rear areas in Virginia). He sought a policy that would deny the use of the coastal areas to Confederate raiders and blockade runners, but also sought to establish North Carolina as a Union state in Union occupied areas. It seems that, upon seeing that Unionism was at least somewhat alive in the region, the Union commander on the spot encouraged his Marines to act with restraint. This stands in stark contrast to what we would later see in Winton.

Additionally, one of the more interesting cases of Unionism happened here after the region was taken by the Union. Raising Union troops from "liberated" areas was a standing Union policy, but this generally tended to have interesting complications of its own. Generally, those best suited to be soldiers were already in the Confederate army, leaving behind soldiers of questionable quality. Slave populations remained an option, but these were problematic for a number of reasons from racial issues within the Union forces to prejudices of commanding officers regarding their suitability as soldiers. The other option tended to be equally problematic: drawing forces from white populations within the region. They frequently attracted opportunists and criminal elements, looking to operate under the guise of Union authority. Though not a problem so much in Union units directly under the control of the Union army, it was a problem under the militia and loyalist units. One such example was the "Buffalos". This group formed in Chowan County after the evacuation of the owner of a large farm in Wingfield, situated on the banks of the Chowan. The farmhouse there quickly became a haven for thugs and criminals, and a man by the name of Jack A. Fairless. He was a man of ill repute to say the least, and eventually he formed the groups there into a "unit" where they raided out into the surrounding countryside, pillaging and plundering in the name of the Union. As a matter of consequence, the farmhouse was fortified and quickly became something resembling a proper Union base (Barrett 174). This was of singular importance, as it was the only permanent military position established by the Union in the region. What started as a farmhouse was quickly fortified with wooden palisades and ultimately the firepower of Union gunboats anchored at the docks on the river. Their reputation as lawless thugs was known even by the Union forces in the region; at one point their depredations were so severe that Burnside dispatched one of his lieutenants to investigate, verifying the rumors were true. Although the Confederates would ultimately stage an attack on the compound and displace them for the rest of the war, it was for a brief moment a Union base in a region that never saw any more official Union representation. 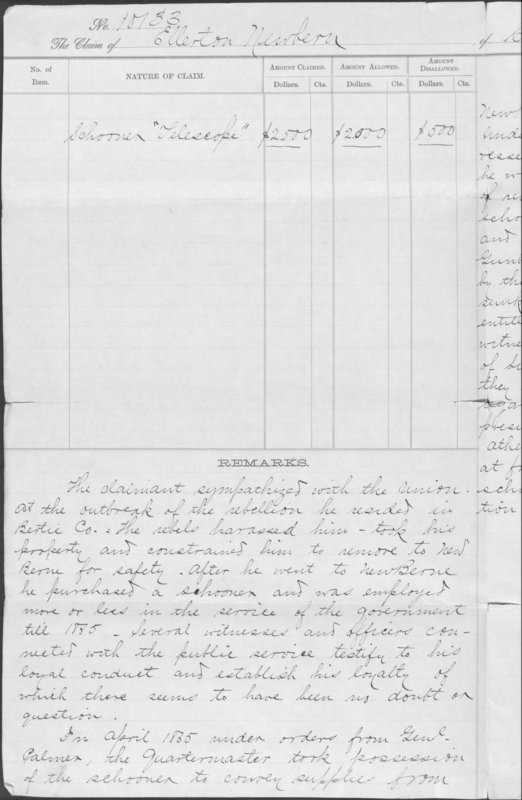 The Southern Claims Commission proves particularly illuminating here as to where sympathies in the region laid. The county included five people with accepted claims, which is the second largest amount of accepted claims in the region I studied (Fig. 3), and the most in the Chowan River Basin proper; Washington County had the most, but it lies outside of the technical boundaries of the basin. In addition, Washington County had almost as many rejected claims as it did accepted (Fig. 4). In contrast, Chowan County only had one rejected claim listed.

Who then were these people who were so unionist? George Bond is a typical example of the average man in the region: a simple, illiterate farmer who had his goods seized by forces of both sides, first by the Confederacy and then by the Union. As one of his witnesses in his claim stated, he was "looked upon as a union man the whole war". He was so outspoken, that he was threatened repeatedly during the war. While there was likely some dramatic embellishment in this deposition, it does suggest there was a surprising degree of resistance on Mr. Bond's part, which is also interesting given his profession. One would not think a farmer to be anti-confederate, but here stands an example of just that.

However, the most interesting Unionist to have an accepted claim would have to be Ellerton Newberne. His claim is interesting for two primary reasons; he was initially a resident of Bertie County, and his claim was the only one I encountered that involved a ship as part of the claim. The schooner seems to have been impressed into Union service, and was hauling cargo from New Bern to Kingston to resupply Sherman's Army when the ship was attacked by a small band of rebels. Though interesting, the more relevant part of the claim is his moving to Edenton, Chowan County. That he would flee Bertie County to Chowan would indicate to me that the region was well known as Unionist, particularly in combination with earlier actions like Norcum's interaction with Union forces.

Of equal importance when evaluating the Southern Claims Commission are the claims that were rejected. As mentioned, the commission had a low acceptance rate, so the number of rejected claims tends to be naturally higher than the number of accepted claims. This is not necessarily indicative of union or confederate sentiments however; given the nature of the Claims Commission they tended to have high standards of loyalty and clerical precision. Chowan County's one rejected claim on record seems to be a case of the latter. Examining his claim (fig. 7) we see that not only did he not list a post office address, he didn't list an attorney either.  Likely, his claim was rejected on the grounds of something procedural such as not having paid to have testimony taken. This adds significance to this claim; not only is it the sole rejected claim of the county, it is also (given the lack of explanatory documentation from the claims commission) highly probable it was not rejected on grounds of loyalty but instead on grounds of procedure.