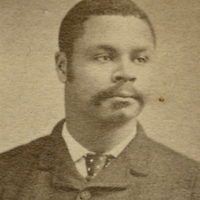 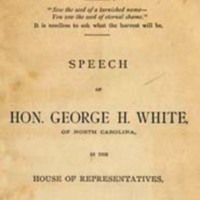 Item 417: Defense of the Negro Race----Charges Answered. Speech of Hon. George H. White, of North Carolina, in the House of Representatives

Despite the protests of many Populists and Republicans, the Suffrage Amendment was ratified by North Carolinians by a vote of 182,217 to 128,285 in an election that set up the Democratic Party as the dominant political force in North Carolina for the next several decades. There is evidence to suggest that electoral fraud took place and some Fusionist leaders, including Senators Marion Butler and Jeter Pritchard, complained that the results of the 1900 election were invalid as the Democratic election laws were unconstitutional. But, the federal government did not seriously attempt overturn the results or punish North Carolina for violating the Fifteenth Amendment. The Democrats had thus succeeded in rolling back one of the most significant gains African Americans had made during the Reconstruction period and in the process disfranchised thousands of poor white voters as well. (Perman 2001, 171-172, 224-244; Edmonds 1951, 209-210)

Although African Americans (and whites) undoubtedly reacted to the amendment in a variety of different ways, at least one prominent African American politician left a very public record of his thoughts. On January 29, 1901, North Carolina Congressman George H. White gave an impassioned speech before the United States House of Representatives. Although this speech began as a commentary concerning appropriations for the Department of Agriculture, White, the sole African-American Representative in Congress, soon shifted gears in order to discuss issues he felt were more important. The result was an emotional defense of his race against the charges leveled at them by his fellow Congressmen, including North Carolinian William Kitchin who had dedicated himself to the causes of disfranchisement and white supremacy. What made this speech particularly powerful was that it was to be White’s last. The Congressman, mindful of the political situation in North Carolina, decided not only not to run for re-election but to leave the state entirely. At the conclusion of his comments, White noted that “this…is perhaps the negroes' temporary farewell to the American Congress; but let me say, Phoenix-like he will rise up some day and come again.” He claimed that his “parting words” were spoken “in behalf of an outraged, heart-broken, bruised, and bleeding, but God-fearing people, faithful, industrious, loyal people--rising people, full of potential force” and that “the only apology that I have to make for the earnestness with which I have spoken is that I am pleading for the life, the liberty, the future happiness, and manhood suffrage for one-eighth of the entire population of the United States.” (Item 417) It would be almost a century before another African American would represent North Carolina in the House of Representatives.