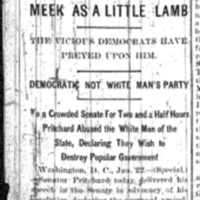 Item 609: Pritchard Spouts on His Resolution 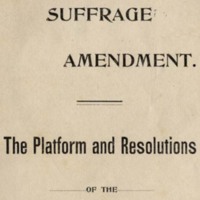 Item 411: The Proposed Suffrage Amendment: The Platform and Resolutions of the People's Party

Perhaps not surprisingly many Republican and Populist leaders objected to the proposed amendment, as well as the new election laws because these laws threatened to further erode their electoral base and solidify the Democrats’ control of the state government. Republicans, in particular, had a lot to lose as, if the amendment passed and African Americans lost the right to vote, the party would be deprived of an important source of support. While Populists were not concerned about the African American vote, per se, many Populist leaders were also suspicious of the law as they believed it could be used to target poor white voters who were likely to support Populist causes. Ironically, the very measure designed to ease white fears of disfranchisement (the grandfather clause) actually led to a great deal of controversy as the public debated its merits. Many Fusionists claimed that the grandfather clause was unconstitutional and, as such, if the election law were challenged in court it might very well be struck down, resulting in the disfranchisement of thousands of white voters. Both groups also attacked the Democratic election laws as partisan and unconstitutional and complained they would lead to rampant fraud and certain “victory” for the Democrats. (Item 411; Item 609; Perman 2001, 166-170, 237; Edmonds 1951, 187, 200-201, 221)

In response to these fears, the Populists released a pamphlet detailing their objections to the Amendment and the new election laws. They criticized the Democrats for embracing the issue of disfranchisement after specifically pledging that they would not do so and for adopting election policies that were designed “to thwart the sovereign will of the people of North Carolina by wholesale fraud and debauchery of the ballot box.” Interestingly, while the Democrats and the Populists fought against each other during the 1900 campaign, many of the arguments described in this pamphlet embraced the same white supremacist ideology espoused by the Democrats, albeit in different ways. They maintained that even if the grandfather clause was upheld, the provisions of the amendment discriminated against whites as “the educated negro after 1908 [would be able] to cast his ballot, while the unfortunate sons of the white men who have been the strength of true democracy [would] stand without a vote at the ballot box.” Further, the pamphlet’s authors denied that the amendment would really solve “the negro problem.” While it would certainly disfranchise many African Americans, it would not prevent the most “troublesome” individuals from voting, presumably because these individuals were educated. Instead of a suffrage amendment, the Populists, who argued that “the People's Party is and has always been more distinctly than any other party in North Carolina a white man's party,” proposed legislation which would prevent African Americans from holding office, a law they claimed would have better success in removing African Americans from politics than the Democrats’ plan. These arguments clearly illustrate that even if the Populists advised different strategies than their Democratic opponents they did share some of the same goals and ideologies. (Item 411)

Despite their complaints, the Populist Party did not take an “official” position on the Suffrage Amendment instead stating that they would “leave the voters of all parties to pass their verdict in the light of the facts.” This refusal to take a definitive stand despite the obvious distaste for the amendment reflected divisions within the Populist Party over the question of the disfranchisement. While some Populists supported denying the vote to African Americans, undoubtedly to the annoyance of their Republican allies, othersactively campaigned for the Amendment’s defeat. In the face of a strong Democratic challenger these internal and external divisions did little to help the Fusionists as they attempted to defeat the incumbent party. (Perman 2001, 168-171, 243-238; Edmonds 1951, 198)

The Republicans, on the other hand, came out strongly against the amendment. Although the Republicans had a less concrete claim to being a “white man’s party,” its leaders also attempted to convince voters that the Democrats did not represent the best interests of North Carolina’s white men. For example, as part of a speech in defense of a resolution he presented to the Senate condemning the amendment, United States Senator Jeter Pritchard denied that the Democrats were sincere in their white supremacist convictions. He argued that, in addition to blatantly violating the 15th Amendment, North Carolina’s Suffrage Amendment was specifically designed to disfranchise poor whites as part of an effort to perpetuate Democratic control of the state. He claimed that the improving condition of the country had “alarmed the Democratic leaders and cause[d] them to resort to the agitation of the race question in order, as they think, to blind the Southern people to the splendid results of Republican legislation.” Although the above quote is drawn from the News and Observer, an undeniably biased source as the accusations made by Pritchard are in keeping with Republican arguments against the amendment, it seems likely that the paper recorded the substance of the speech correctly even if Pritchard’s words were presented in a decidedly unfavorable light. In any case, even if the Republicans did not make a definitive case for being the “white man’s party,” Republican leaders were clearly making some attempt to demonstrate that they were concerned about the issues facing North Carolina’s white men. (Item 609; Perman 2001, 234-238)