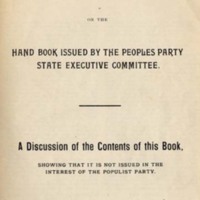 Item 412: Comments by the State Democratic Committee on the Hand Book Issued by the Peoples Party State Executive Committee 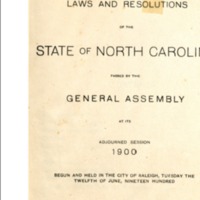 Item 384: Laws and Resolutions of the State of North Carolina General Assembly at its Adjourned Session 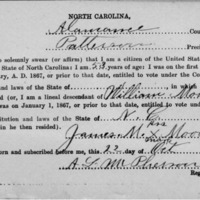 After significant victories in the election of 1898, the Democrats continued their campaign to re-establish white supremacy. During the previous campaign the Democrats had claimed that they would “never submit to the people any proposition to take from a man his right to vote,” and further that any allegations to the contrary were designed “to mislead, to deceive and to make political capital.” As soon as they were securely in office, however, the Democrats made disfranchisement measures targeted at African Americans part of their legislative agenda. (Item 412; Perman 2001, 162-163; Edmonds 1951, 179; Anderson 1981, 296) Josephus Daniels went to Washington in order seek advice from representatives of states that had already adopted disfranchisement policies and, upon his return, he gave a speech announcing that the Democratic Party would be pursuing suffrage restriction measures. After some debate over the best course of action, the Democrats decided to draft a constitutional amendment, which was passed by the state Assembly in 1899 and revised slightly in 1900. (Perman 2001, 163-166) Although this Suffrage Amendment imposed literacy tests and poll taxes which threatened to deny many poor North Carolinians the right to vote regardless of race, special provisions in the law provided at least nominal protection for white voters. Anyone who was already eligible to vote before January of 1867 (before the passage of the Fifteenth Amendment extended this right to African Americans) was exempted from literacy restrictions. In addition, a grandfather clause stipulated that anyone that had an ancestor who met this requirement was also eligible to vote as long as they registered by December 1, 1908. (Item 384; Perman 2001, 163-164; Edmonds 1951, 183) For example, although James Moody was likely illiterate (as judged by his use of a mark rather than a signature on his registration card) and would not have been eligible to vote in 1867 because of his age, he had an ancestor who could vote that year (William Moody) and was therefore still able to register. (Item 14)

In order to ensure the amendment’s passage, the Democrats also passed legislation reworking North Carolina’s election laws to their own advantage. This course was essential because in order to become law, the amendment had to be ratified by North Carolina voters, a process which could be derailed by Populists and Republicans. Among other things, the complicated new law prohibited the use of colored or otherwise marked ballots to help voters who were illiterate. In addition, registrars (who would be appointed by a Democratic election board) would have a great deal of leeway in determining who was eligible to vote, a provision that allowed the Democrats to prevent individuals who were legally entitled to vote from registering if they failed to meet the registrars highly mutable standards. As all men were required to re-register for the 1900 election, this new law helped to ensure that Democrats would be able to weed out at least some individuals they believed would be opposed to the amendment and thereby increase the probability that it would pass. (Perman 2001, 167-168; Redding 2003, 130; Edmunds 1951, 184-189; Anderson 1981, 303-304)