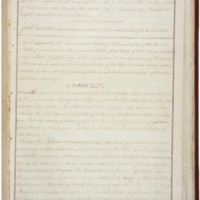 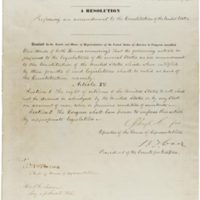 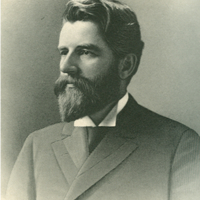 In the aftermath of the Civil War, the former Confederate states had to come to terms not only with the federal government but also with thousands of newly freed African Americans living within their borders. At least initially, the federal government dictated the terms of these interactions. As part of their plan for Reconstruction, the United States Congress, led by Northern Republicans, adopted several Constitutional amendments designed to both protect the rights of African Americans and facilitate the transition between a slave-based economy and a free labor system in the South. (Richardson 2001, ix, 12-82) In addition to the Thirteenth Amendment, which abolished the institution of slavery, the Fourteenth Amendment extended new rights to African Americans, granting them citizenship and guaranteeing them “due process” and “equal protection under the law.” (Item 561) These rights were further expanded by the Fifteenth Amendment, which declared that “the right of citizens of the United States to vote shall not be denied or abridged by the United States or by any State on account of race, color, or previous condition of servitude.” (Item 560) The promise of legal and political equality however proved to be short lived. By the 1870s white Southern Democrats were able to use violence, fraud, and intimidation to regain control of their states and begin the process of rolling back federal Reconstruction policies. (Hahn 2003, 265-313; Perman 2001 9-17)

By the end of the Reconstruction period, the Democrats were, thus, back in control not only of North Carolina but of the South as a whole. The political situation of the state, however, was somewhat different than that of most of the South as the dominance of North Carolina’s Democratic Party abruptly came to an end less than three decades after it had regained power. Although the People’s Party (also known as the Populist Party) had been present in the state since the 1870s, a severe economic downturn twenty years later left many Democrats frustrated and looking for new political representation. A number of poor farmers who identified with the Populists’ economic message began to turn against the unresponsive Democratic Party, which had failed to meet their needs during the crisis. Unable to defeat the incumbent party on their own, especially in the face of unfair voting laws which benefitted the Democrats, Populist leaders, including State Party Chairman Marion Butler, joined forces with the Republicans in 1894 to create a Fusion ticket (which split the offices between the two parties) in order to present a unified challenge to the Democrats. The strategy proved to be successful and the Democrats were resoundingly defeated. In 1896, the Fusionists were able to build on their early victories, increasing their majorities in both houses of the General Assembly and electing a Republican governor, Daniel Russell, as well. (Perman 2001, 150-153; Redding 2003, 97-98)