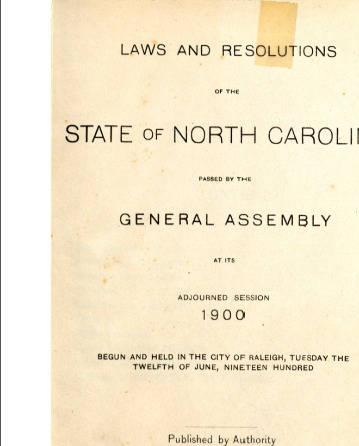 Item 384: Laws and Resolutions of the State of North Carolina General Assembly at its Adjourned Session 1900

In August of 1900, the voters of North Carolina ratified an amendment to the state constitution which was designed to disfranchise thousands of their fellow citizens based solely on the color of their skin. The Suffrage Amendment was crafted and supported by the recently reinvigorated Democratic Party, which had returned to power in North Carolina in 1898 after several years of joint Republican and Populist (also known as Fusionist) rule. Although many of the stateâ€™s Republican and Populist leaders objected to the amendment, claiming that it was unconstitutional and (correctly) prophesizing that it would disfranchise both blacks and whites, divisions within and between the parties hampered their ability to combat the better organized Democrats, who, as part of their 1900 political campaign, launched a well-coordinated, although viciously racist, disfranchisement crusade, centered on issues of white supremacy and the supposed threat of â€œnegro domination.â€ The Democratsâ€™ claim to represent the best interests of North Carolinaâ€™s white men, however, did not go unchallenged by their opponents. In fact leaders on both sides of the debate (particularly the Democrats and the Populists) attempted to convince white voters that the best way to promote white supremacy was to join with their respective parties. Ultimately the Democrats, with the aid of prominent party newspapers such as the Raleigh News and Observer, succeeded in claiming the mantel of the â€œwhite manâ€™s partyâ€ and, despite Fusionist protests, making suffrage the central issue of the campaign. The Populists, on the other hand, although a predominantly white party, struggled to defend their claims to white supremacy, particularly as their decision to once again fuse with the Republicans, who had a large African American base, left Populist leaders open to the charge that they were controlled by the interests of African Americans. The success of Democratic leaders in defining their party in terms of white supremacist ideology and, just as importantly, in convincing a majority of North Carolinaâ€™s white voters to identify with their racially stratified platform (of which the amendment was a key part), led not only to Democratic victories in 1900 but also helped to establish the Democrats as the dominant party in the state for the next seventy years. (Redding 2003, 117-133)

Although several historians have examined the disfranchisement initiatives which took place across the South at the turn of the twentieth century, little attention has been devoted to how the process played out in North Carolina specifically. In his work, The Strange Career of Jim Crow, C. Vann Woodward looked at white supremacy and disfranchisement as part of his larger examination of race relations in the southern United States. He claimed that disfranchisement was â€œthe first stepâ€ in utilizing white supremacy to reunite southern whites who had been divided by the sometimes violent political campaigns that had shaken the South during the 1890s. As his book focuses on the region as a whole, however, North Carolina was given only minimal consideration in this discussion. (Woodward 1974, 82-83) In The Right to Vote: The Contested History of Democracy in the United States, Alexander Keyssar also provided a general picture of the issue of African American disfranchisement. He argued, contrary to popular belief, that disenfranchisement was actually more in keeping with the history of democracy during that time period than the extension of suffrage to the newly freed African Americans after the Civil War had been. (Keyssar 2000, 79-80) While he did not delve too deeply into the specific actions of many southern states, he did briefly address some of the issues involved throughout the region. For example, while he noted that Democrats â€œsolidif[ied] their hold on the South by modifying the voting laws in ways that would exclude African Americans without necessarily violating the Fifteenth Amendment,â€ something that was certainly true in North Carolina, his discussion of the issue, and of disfranchisement as a whole, failed to mention the state at all. (Keyssar 2000, 111)

A few historians have provided a more in-depth look at how the Democrats instituted disfranchisement in North Carolina. William Alexander Mabry wrote two articles in the 1930s about the role played by African Americans in North Carolina politics and the passage of the North Carolina Suffrage Amendment. While his descriptions of the events taking place in the state in the late nineteenth and early twentieth century contain some useful information, his failure to fully interrogate the situations he described (or sometimes the sources he utilized) meant that, although he created a foundation for other historians to use, he only scratched the surface of the issues he considered. (Mabry 1935, 79-102; Mabry 1936, 1-24) Michael Perman provided a more contemporary reading of disfranchisement in North Carolina in his book, Struggle for Mastery: Disfranchisement in the South, 1888-1908, in which he examined disfranchisement at both the regional and state levels. Perman argued that disfranchisement was used by Democrats in the South to complete the process of overthrowing Reconstruction and to essentially restore their statesâ€™ governments to the way they were before the Civil War. (Perman 2001, 10-16) In his section on North Carolina, he examined how the stateâ€™s Democratic Party used the Suffrage Amendment to weaken their Republican and Populist opponents and establish themselves as the dominant power. Although Perman did consider each partyâ€™s views on disfranchisement, he focused more on strategy than argument and, as such, there are aspects of the debate that he failed to explore in depth, including the use of white supremacist ideology by those on both sides of the issue. (Perman 2001, 24-25, 148-172) This essay will therefore help to fill in some of the gaps left by existing scholarship on disfranchisement in North Carolina and thereby create a more complete picture of a significant moment in North Carolina history.