About the Furnace at Endor 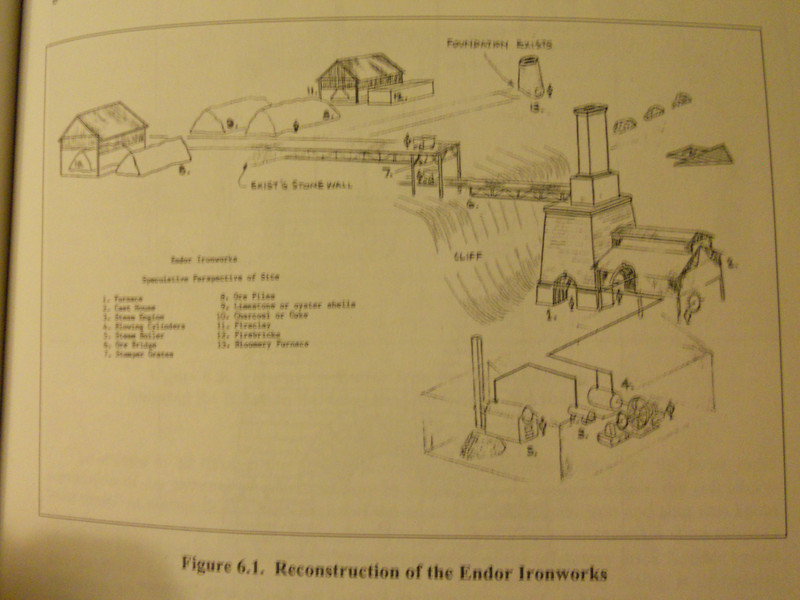 Endor was a large blast furnace built using stone and brick and assembled without mortar. A blast furnace is a smelting furnace used to extract metals from rock ore. It is more efficient than standard furnaces due to the fact that the hearth is blasted with air, stoking the flames and achieving a hotter burn. This allows for a faster and more thorough extraction of metal from the rock. Its base was roughly 32 square feet, and it had a height of about 35 feet. (Glass 1975) It was built along side of a cliff of equal height to facilitate loading from the top without having to carry the material up a ramp. The site of the furnace most likely had other structures on it as well. The foundations of several other structures still exist today. The furnace was built on the southern bank of the Deep river. The ore, fuel, flux, and other supplies would arrive on barges towed up the river from their sources. The diagram to the right presents what Wiesner and others believe the site to have looked like during operation. The materials would have likely been stored on top of the cliff and taken across a bridge from the cliff to the top of the furnace where it would be dumped inside. A small enclosure was likely attached to the furnace where the casting would take place; also there would have been a small building adjacent to the furnace where the boiler and steam engine would provide the blast. (Item 723) 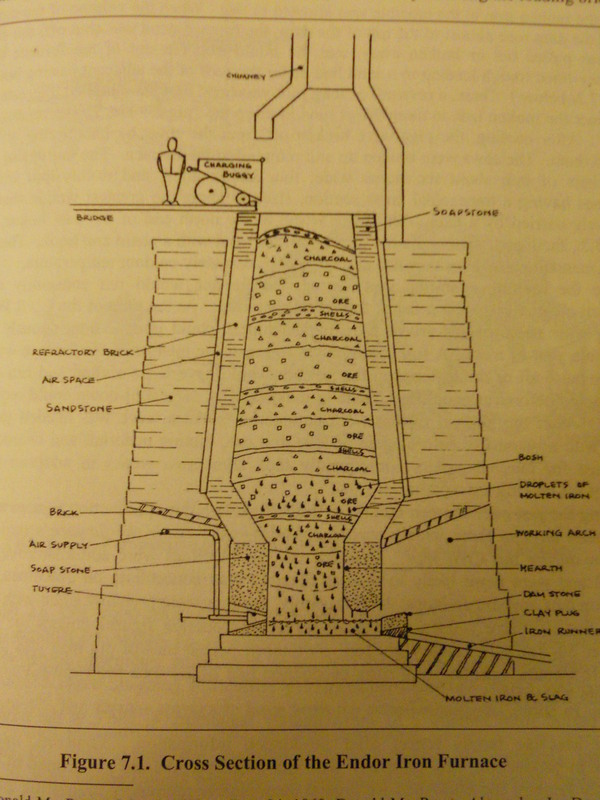 A furnace such as Endor was loaded in layers. The crushed ore would be dumped in followed by a fuel source, usually coal, charcoal, or coke. After that a fluxing agent would be added to purify the iron as it dripped to the bottom of the furnace. Limestone was the best flux available at the time; however, there were no deposits of limestone close to Endor. Lime rich oyster shells and marl were substituted as a fluxing agent at Endor. (Wiesner 2007, 65) After adding the flux, the layers were repeated until the furnace was full. The diagram to the right depicts this layering in a cross section of the Endor furnace. (Item 754)

When the furnace was working, iron melted out from the ore and collected at the bottom of the furnace. The molten iron was then led down a narrow trench and channeled into molds where it cooled and hardened into pig iron. Pig iron was used as a raw material for more refined iron products or for some finished products. Due to high carbon impurities, it was brittle and unfit for use in heavy machinery. Its name originated because the bars of iron in the molds resembled piglets suckling from a mother sow. The pig irons produced at Endor were about six inches wide, four inches thick, and twenty-four inches long and were “sized at about the greatest weight that could be repetitively carried by a man.” (Wiesner 2007, 50)