The necessity to keep the boiler and furnace running constantly is also shown in the ledger and provides further evidence that the furnace was fully operational. As stated by Wiesner, the Endor furnace was a combination charcoal and coke furnace, and possibly the first blast furnace in North Carolina to use both. (Wiesner 2007, 60) Charcoal is made by burning wood in an environment deprived of oxygen while coke is made using the same method but with coal. (Wiesner 2007, 163) Both coal and wood do not burn hot enough to efficiently smelt iron in a furnace the size of the one at Endor, however when converted to charcoal and coke, these fuels burn much hotter. Both charcoal and coke were made on-site before being used to charge the furnace. Both coal and wood were probably used in the steam boiler.

The coal resources in the Deep River Valley provided the fuel for the Endor Iron Company. Under the ownership of the McRaes and Benjamin Jordan, all of the coal used at Endor most likely came from Tysor Place upriver from Endor. (Wiesner 2007, 62) The McRaes also owned land directly across the river from the furnace at Farmville Place; coal was available from that source as well. Farmville Place was sold to the Downer Group along with the rest of the Endor iron Company’s holdings. The ledger shows that the mine at Farmville Place provided coal to the furnace at Endor. On May 22, 1864, the Downer Group paid two separate amounts to the Farmville Coal Company for both coal and coke totaling 2210.75 in Confederate Dollars. (Item 670) A geological map by Ebenezer Emmons shows the site of the Farmville shaft along with the coal vein which traveled across the valley. (Item 705) 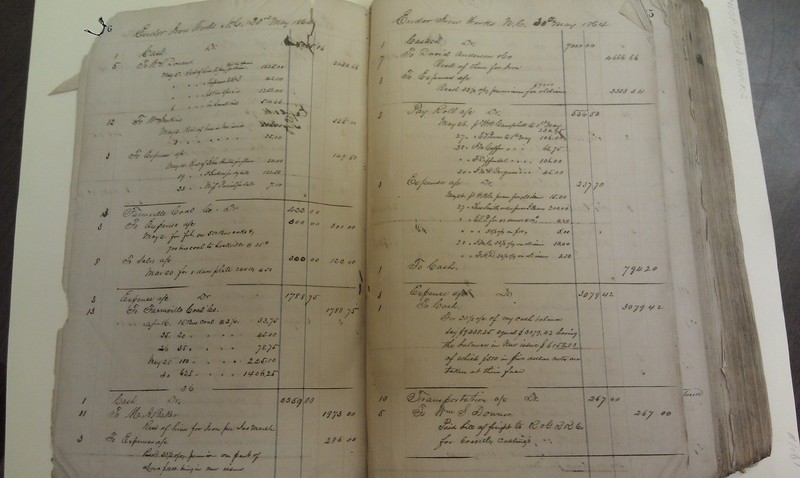 The amount of money spent on coal shows that it was fueling something. The boiler may run on coal, but it cannot run on coke. It is obvious the coke was purchased to charge the furnace. The ledger also kept track of purchases of wood by the Endor Iron Company.  Wood was used as a back up to coal for both use in the boiler and, when converted to charcoal, for use in the furnace as well. (Wiesner 2007, 64) Wood was included as a purchase under “wood and fodder” in the ledger and appeared numerous times. (Item 670) Wood may have also been used in the construction and upkeep of the various structures at the site as well as bunk houses for slaves. The purchase of both wood and coal signifies the ambition of the Endor Iron Company under the Downer Group to stay operational by utilizing multiple fuel sources. 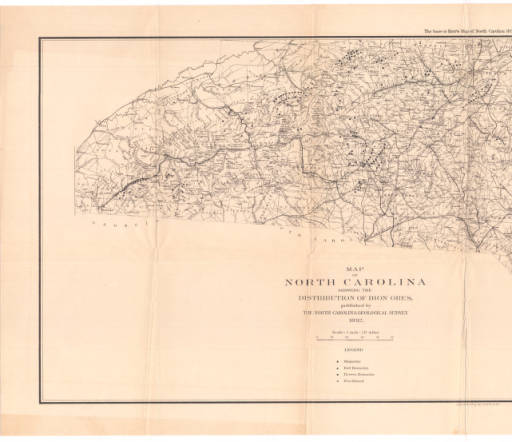 Wiesner argues that under the McRae’s “the single greatest disadvantage of the Endor site was the lack of limestone or any other good alternative fluxing agent.” (Wiesner 2007, 65) It can be assumed that these problems persisted under the ownership of William Downer as well. As stated earlier, the furnace at Endor used oyster shells and marl as a substitute for limestone. The impractical distance between the source of flux and the furnace paired with transportation issues arising from the ongoing war pressured the company even further. According to Wiesner, it is safe to say that oyster shells served as the primary fluxing agent of the furnace. (Wiesner 2007, 65)

The iron ore used at Endor was mined mostly from the Buckhorn Iron Mine, twenty-two and a half miles downstream on the Cape Fear River. (Hairr 2011) An 1892 map of North Carolina by Washington Caruthers Kerr and Henry Benjamin Charles Nitze shows the location of the Buckhorn ore, which they identify as magnetite iron. (Item 702) The ore was floated upriver on barges to the iron works where it was offloaded.  This process was without a doubt inefficient and slow, making it a possible reason why the furnace perpetually under produced during its ownership by both J&D McRae Company and the Downer Group, leaving it only able to fulfill local requests for pig iron.