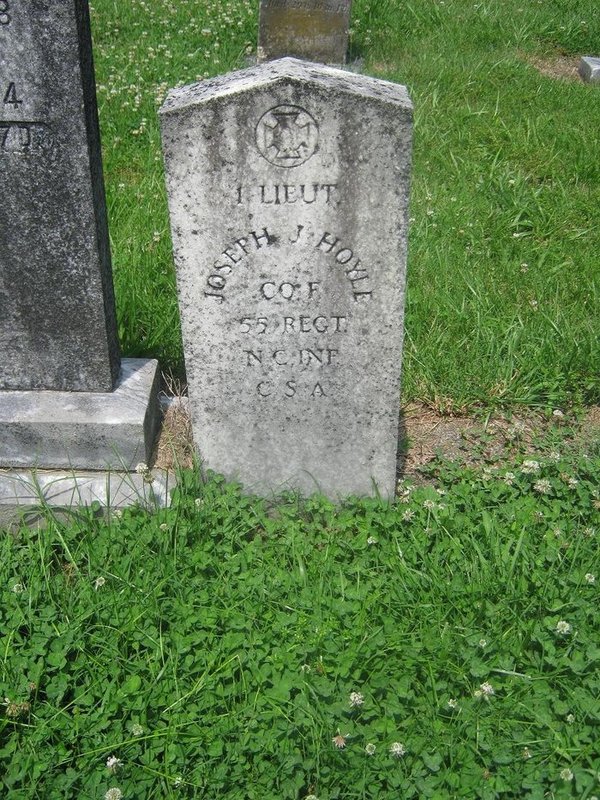 Joseph J. Hoyle was twenty-five years old when he fought in the Civil War with Company F in the 55th North Carolina Infantry.  Born on April 14, 1838 in Cleveland County in western North Carolina, Joseph Hoyle grew up as the oldest of five children to Martin and Susan Hoyle.  Martin Hoyle was a farmer whose land was enough to provide for his family and still meet any financial needs.  At the age of twenty-two, Joseph Hoyle married Sarah A. Self, to whom he wrote many letters filled with love and concern for his wife back home during the war.  Along with Joseph Hoyle, Sarah Hoyle also had six brothers fighting in the war for the Confederate Army, two of whom died from disease.  Her two youngest brothers served in the same company as her husband.

Joseph Hoyle was a well educated man having attended Rutherford Academy and gained a teaching certification for subjects such as, algebra, chemistry, geography, Latin, reading, spelling, and writing (Hoyle and Girvan 2010, 8).  Along with teaching, Joseph Hoyle was a devout Christian who eventually wanted to become a minister.  The importance of being a Christian is seen in Joseph Hoyle’s letters to his wife where he often expressed his trust in God.  Although little is known about Joseph Hoyle’s feelings towards secession, it is seen through his letters that he believed in revolution.  Joseph Hoyle saw revolution, as defined by Thomas Jefferson, as necessary when a government starts to infringe on the rights of citizens and the duty of all who supported liberty and freedom (Hoyle and Girvan 2010, 9).

As a teacher, Joseph Hoyle was exempt from serving in the Confederate Army, but still enlisted anyway on May 10, 1862 as a private.  It is possible he enlisted in order to have a say in which unit he joined in order to ensure he served with family and neighbors rather than strangers, but most likely he enlisted because it was time for him to do his part in helping win Southern independence due to the fact that he knew he could not be drafted when the Conscription Act of 1862 was passed (Hoyle and Girvan 2010, 11).  Later in the war teachers were not longer exempt from conscription.  Throughout the war, Joseph Hoyle rose through the ranks, receiving a promotion to Sergeant on November 25, 1862 and then later to Lieutenant on May 11, 1863.  As part of the 55th North Carolina Infantry, Hoyle saw action during the battle for Washington, North Carolina, throughout the siege of Suffolk, Virginia, at Gettysburg, at Bristoe Station in the Overland campaign and at Globe Tavern where he was fatally wounded (Hoyle and Girvan 2010, 11).  After being wounded in the leg at Globe Tavern, Joseph Hoyle was taken to Hospital Number 4 in Richmond, Virginia where his leg was amputated and he later died on September 1, 1864 at the age of twenty-six (Hoyle and Girvan 2010, 187).