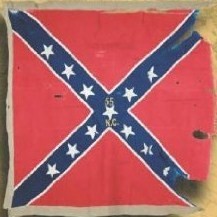 The 55th North Carolina Infantry was one of seventy-two regiments formed in North Carolina in response to the Civil War, in May 1862.  The men in the unit represented over twenty counties and came from all regions of the state.  This was uncommon since most units were made up of men from surrounding counties, many of whom knew each other well.  A majority of the men in the 55th were farmers who did not own slaves; also represented in the regiment were blacksmiths, teachers, lawyers, and doctors (Girvan 2006, 2).  These men had not rushed to enlist at the beginning of the war, but rather waited until 1862 after the new conscription law reached North Carolina.  They probably enlisted because they felt obligated to fight or because they knew it was only a matter of time before they would be drafted.

The 55th North Carolina was made up of men who, for the most part, did not have any prior military experience.  Though most of the men in the 55th enlisted, a good number of them were drafted.  The average age of the men who fought with the 55th was early to mid-twenties, but the ages ranged from sixteen to fifty.  Sixty-four of the men that made up the company were substitutes who were there to take the place of a man who was wealthy enough to pay his way out of serving.  In all, the 55th had approximately eight hundred and fifty men when it was formed, but would not again have that many men present and accounted for, for the remainder of the war.  For the first year of its existence, the 55th North Carolina did not take part in any of the major battles; the 55th did not actually join the Army of Northern Virginia until the end of May 1863 (Girvan 2006, 3).  Before joining the Army of Northern Virginia, the 55th was temporarily part of Brigadier General Joseph R. Davis’s Mississippi brigade where it remained under his command until 1865 when it was placed under Brigadier General John Cooke’s North Carolina brigade.

The role of the 55th in the Civil War has generally been overlooked, but the unit played an important role is some key conflicts.  The determination of the men in the 55th prevented a Union victory during the fighting on the Orange Plank Hill.  Had the 55th retreated during this fighting, the Overland Campaign might have ended in a few weeks rather than lasting a year.  Had this happened, General Lee would have had no other option than to fall back to Richmond, which would have been detrimental to the Confederate Army.  At Gettysburg, the 55th North Carolina broke the Union lines, inflicting severe damage to the Union unit there.  Although the 55th did not take part in the early major battles of the Civil War, historians still view the regiments formed in 1862 as having made just as many important contributions as the regiments formed in 1861 (Girvan 2006, 3-4).