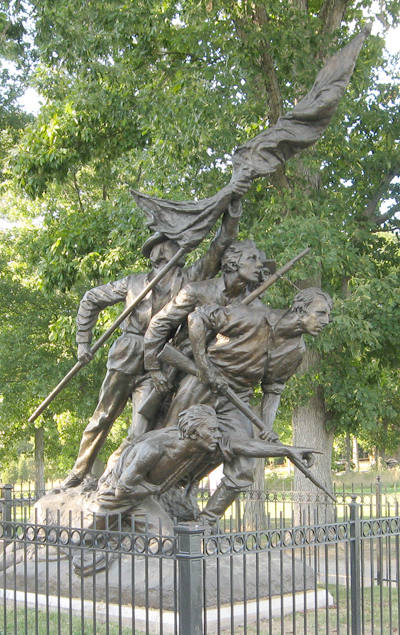 Hundreds of thousands of men fought in the Civil War, either for the Confederacy or the Union.  Many men rushed to volunteer after the first shots were fired upon Fort Sumter and thousands more either volunteered or were drafted as the war went on.  The 55th North Carolina Infantry was mostly made up of volunteers with the exeption of a handful of conscripts.  Many of the men who volunteered did so out of honor, loyalty and duty to the Confederacy.  Joseph Hoyle most likely volunteered for these reasons, considering the fact that he did not have to volunteer and could not have been drafted as a teacher.  Other reasons for fighting according to Maslowski were “love for one’s country…belief in a better world to come in the future if victory was achieved…belief that there were certain basic issues at stake in the War and it was worthwhile fighting for the benefits which would accrue from a favorable settlement of these issues.  Among these issues were slavery…the tariff…freedom and liberty…and states rights” (Maslowski 1970, 123).  Joseph Hoyle was not a slave owner so that issue had no meaning to him and was not a motivation for him to fight.  Other reasons Maslowski gave for men volunteering are “fighting to gain glory and to “save face” both among fellow soldiers and at home…fighting for adventure and excitement…financial and economic considerations…and fighting just to get the War over with in order to return home to loved ones and “the old way of life”” (Maslowski 1970, 123).  Joseph Hoyle’s letters never hinted to the fact that he was seeking excitemnt or that he and his wife were having finacial issues, but they did give a sense of just wanting the war to be over with.  Many times throughout his letters Joseph Hoyle expressed how much he wanted to be back home with his wife.  Through this, one can assume that one of his motivations to fight was to return home and life a long life with his wife.

A majority of men fighting for the Confederacy believed their cause was just and that God was on their side.  Religious services became part of weekly life while in camp, often men would gather several times a week in tents to conduct their own religious service.  Religion and knowing that family members were praying for their safety not only gave comfort to Joseph Hoyle and the men of the 55th, but also helped keep them in high spirits.  Through the belief that God was fighting for the Confederacy and weekly religious services, men were able to keep their morale high and keep fighting.

When the 55th was formed, it had approximatly eight hundred and fifty men at full strength.  This would be the only time for the remainder of the war that it woud be at full stregth.  As the war went on, the number of men dwindled due to death and desertion.  After the battle of Gettysburg, it was reported that “nearly 50 percent of the men of the regiment were killed, wounded, or captured….Lieutenant Hoyle informed his wife that as of July 20, there were only 14 men left in Company F” (Girvan 2006, 75).  Amongst so much death, morale would fluctuate between low and high.  When morale was high, regiment leaders did not have much to worry about, in the way of their men, because they were more willing to fight.  Once morale got low there was the concern of men deserting, which woud eventually weaken the Confederate army significantly.  All in all, the men of the 55th North Carolina Infantry would fight on for their cause, never giving up until the surrender of the Confederate army in 1865.