Whether or not morale was high can be seen in letters sent from soldiers.  A majority of the time “the less a soldier complained the better his morale, and vice versa” (Maslowski 1970, 124).  Many men often complained about the weather and of exhaustion.   Joseph Hoyle wrote to his wife on July 25, 1863 telling her about a decline in morale due to exhaustion from the constant fighting and marching  He wrote, “we have been now nearly two months since we left Blackwater, and we have been marching or fighting nearly the whole time.  We have seen a hard time of it, if any body ever did” (Item 690). The morale of Joseph Hoyle and the men of the 55th would have declined after these two months due to a lack of adequate rest from two months of constant fighting and marching.

In the winter months, most men were not properly equipped for the cold and often had to spend the night in the snow and rain.  In the spring and summer months, the weather was hot and dry, providing no escape for the men.  In a letter from July 5, 1864, Joseph Hoyle described how the men were suffering from the heat for his wife: “We are having very dry and hot weather for some time now, and suffer a great deal from the heat, as we frequently have to lie in line through open fields exposed to the sun.  And when we march, the dust is excessively hard on us” (Item 691). The hot and dry weather would have caused a drop in morale because Joseph Hoyle and the men of the 55th had no way to escape it and cool down.  Extreme heat would have sucked the energy out of the men as they tried to stay cool, making any menial task a chore.  The weather and the constant fighting took a toll on Joseph Hoyle and his fellow soldiers, a battle Confederate and Union soldiers alike fought together.  The weather was not always complained about though, as long as it was delaying the start of the campaigning season.  Joseph Hoyle expressed this relief in a letter written on April 17, 1864: “Although it puts us to some inconvienence, yet we are not sorry to see it rain, as we know it keeps off the fight some longer.  When it is raining, you will frequently hear some one say “This rain has prolonged many a man’s life,” and it is a true saying, as we expect the Yankees to move upon us whenever the roads get in condition. (or may be we will move upon them, I don’t know)” (Item 692).

Another common complaint in soldiers’ letters was the lack of food and clothing.  Men would often complain that the officers were taking the better rations and clothing while the men were considered lucky if they received new clothes and shoes (Girvan 2006, 124).  At times, the food shortage would cause men to steal from locals because they simply could not live off hardtack and bacon fat.  It would not have been uncommon for men to get scurvy due to the lack of fruits and vegetables.  This lack of food and supplies was enough to make men feel demoralized.  Joseph Hoyle himself never appeared to be lacking supplies, other than what he asked his wife to make for him, but occasionally he would mention in a letter how most of the men did not have proper supplies and that it hurt their morale.

Another factor in lowering morale was the constant sickness among the troops.  From the beginning of the war, sickness and the spread of diseases was a problem due to the fact that large amounts of men were grouped into a small area.  Those most prone to contracting a disease were rural farmers “because their bodies’ immune systems were not prepared to ward off diseases that were common in the cities” (Girvan 2006, 8).  The most common diseases were the measles, mumps and the cold.  They were common enough that the Confederacy found them barely worth noting.  Many men died from contracting diseases though, “death by disease was not what men had volunteered for.  Disease was a far more impersonal enemy than the savage foe men had gone to war to fight” (Mitchell, Civil War Soldiers 1988, 60).  In one of his earliest letters, Joseph Hoyle wrote home to his wife about the measles and other sicknesses in camp: “The measles have made their appearance in our company.  Joel Hoyle has had them several days.  We have also some other slight sick cases” (Item 693). Sickness running rampant throughout regiments would have hurt morale because many men could not get properly treated and many even died from whatever sickness they had.  This would have lowered morale because men would have seen other men dying from something other than battle and would have rather had that been the case while at home with family.  Something else many men were encountering for the first time was lice.  Lice were normally associated with poverty, but had also become associated with the soldier.  Lice were considered inescapable in camp and on the march, “in camp lice were inescapable because of the proximity of large numbers of men with varying habits of personal cleanliness.  On the march they were inescapable because men could not wash their clothes or their bodies” (Mitchell, Civil War Soldiers 1988, 59).  Lice were just another factor in low morale among the troops. 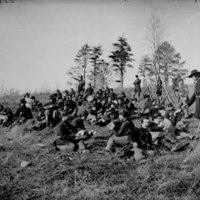 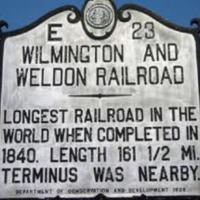 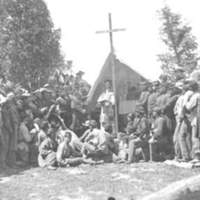 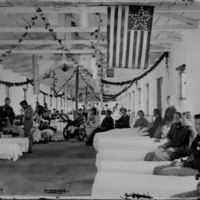