One of the biggest problems for regiments during the Civil War was desertion.  In many cases a man deserting was directly related to the low morale at the time of desertion.  Men deserted from all regiments, but North Carolina regiments had the highest desertion rates (McPherson, What They Fought For 1994, 16).  Under the category of desertion, there were men who were sulkers, fakers and deserters.  Sulkers were men who disappeared to the rear once a regiment arrived on the front lines.  These men seemed to disappear when bullets started flying, only to reappear the following day (McPherson, What They Fought For 1994, 17).  Fakers were men who pretended to be sick in order to avoid going to battle.  Deserters were men who who left the army.  These men had two options, “try to cross into Union lines, in which case he could not be reached by the Confederate authorities, or he could remain within Confederate lines and make his way home or to some other place he might lose himself” (Mitchell, Civil War Soldiers 1988, 170).  The most popular way of getting out of battle was to fake sickness, “some men who sought to evade service took the drastic measure of self-mutilation in order to procure a discharge” (Dunkelman 2004, 84).  Due to this being the most popular method of avoiding battle, it was  hard to decifer who really was sick and who was faking.  In order to avoid being accused of being a coward, many genuinely sick soldiers did go into battle (McPherson, For Cause and Comrades 1997, 79).  Joseph Hoyle became sick a few times during the war, but never let his sickness get in the way of his duty, often having to march several miles when feeling very weak.

From what is known, desertion was more common among married soldiers than unmarried soldiers and among conscripts than volunteers.  Men would desert “when convinced that the cause was hopeless or that his family needed him more than the army did” (Mitchell, Civil War Soldiers 1988, 168).  To try and put an end to men deserting, regiment leaders had to come up with ways of punishing the men who were caught.  To punish sulkers, they decided on the punishment of bucking and gagging.  The offending soldier “ was placed on the ground and his hands and feet were bound in a seated position.  The offending soldier’s knees were pulled up between his arms and a stick was inserted running under his knees and over his arms.  The soldier was then gagged by having a stick shoved sideways into his mouth and tied to his head to keep it secure” (Girvan 2006, 16).  Joseph Hoyle never reported witnessing this type of punishment, but he did write about witnessing the most severe punishment, death.  When desertion started becoming more of a major problem later in the war, regiment leaders started to punish the offending soldiers by shooting them and making their entire brigade watch.  Joseph Hoyle wrote to his wife about witnessing such a punishment on January 30, 1864: “Dear Sarah, I had to witness one of the most affecting sights to day, I believe I ever did in my life before. That was the shooting a man in our regiment for desertion. The whole brigade was marched out in a square to see it. Although I was out I could not look at him when they shot him, so I turned my eyes off him when they went to fire. I felt very solemn indeed, and all appeared very serious. I will agree with you now that it is not rite to shoot a man.” (Item 699). This letter shows that Joseph Hoyle orignially beleived that deserters should have been punished severly, but after watching a man get shot for deserting he had a change of heart.  Joseph Hoyle was not able to watch a man get shot for commiting such an act, but was able to partake in killing a man in battle.  This is possibly due to the fact that a deserter was turning their back on their fellow soldiers and the Confederacy while in battle the Union army was the enemy.  Witnessing these types of punishments would have lowered the morale of the troops because they were forced to face the realization that they were either going to die in battle, or if they decided to give up and return home they would be shot by their own officers.  Though desertion was a major problem for both the Confederate and Union armies, it did not cripple the Union, while “Southern desertion, on the other hand, helped destroy any chance of a Confederate victory” (Mitchell, Civil War Soldiers 1988, 182-183). 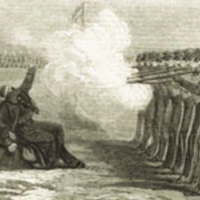