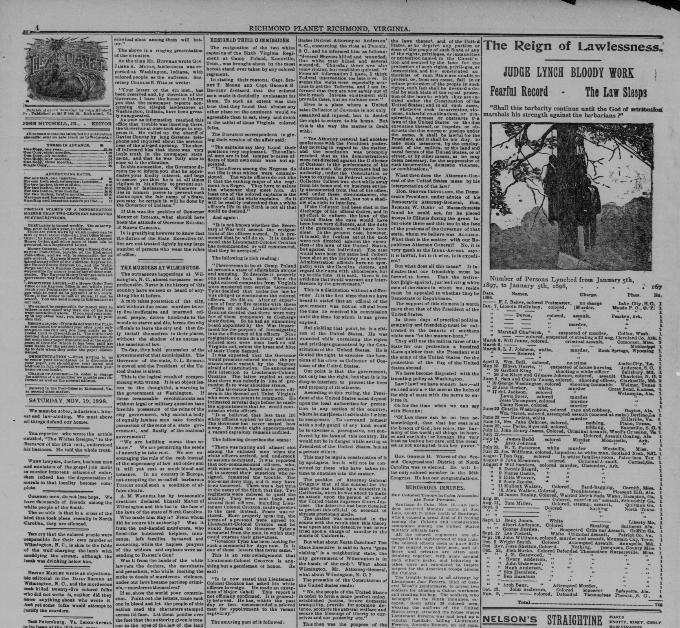 Unlike the 1894 labor riots in Illinois, no federal troops were sent to bolster the government in Wilmington, North Carolina. Both the newspapers in question address this fact, but from greatly different perspectives.

On November 12, 1898 the News and Observer published an article title “No Federal Interference” in which it reported that although “the President expressed deep concern”[1] the developments up to this point did not warrant federal intervention. The state would be “kept under close surveillance”[2] and no action would be taken unless rioting resumed.  It was reported that the President would meet with the Attorney General when he returned to town.[3] Although the language in the article is fairly neutral, the title makes it clear that any intervention on the part of the federal government would not only be unwelcome, but seen as a direct intrusion into North Carolina’s rights to handle purely internal matters.

The News and Observer revisited the issue after President McKinley’s annual speech to Congress. It published an article called “Race Riots Ignored” on December 06, 1898. The article stated President did not mention the issue of race in either of the Carolina’s; this is seen as “significant”[4] as the administration would not support any legislation.  Federal intervention is once again seen as a violation of the State of North Carolina sovereignty. Reportedly, President McKinley felt that any interference by Congress would “be not only unjust to the white people of the South, but would be overstepping the bounds of tolerance.”[5]  The article fails to make any reference to the plight of the deposed government or the African Americans still living in Wilmington, North Carolina.

The Richmond Planet addressed the question of federal intervention in Wilmington with a legalistic argument published on November 19, 1898. The Planet’s article quotes the constitution and federal statutes to rebuff Attorney General Griggs interpretation that the federal government has no right to interfere in Wilmington. Article XIV of the Constitution states that no person can be deprived of life, liberty, or property without due process of law, the Planet asks if the city of Wilmington has been deprived of these things during the riot on November 10, 1898. Article IV of the Constitution guarantees to every State a republican form of government. The Planet asked if Wilmington could be said to have this form of government. The riot ended with the resignation of the leaders of the city and a completely new government installed without any formal elections. Furthermore, the Planet claimed that Federal Statute Sec. 5,299 makes it the duty of the President to intervene with “the employment of the militia, or the land and naval forces of the United States”[6] in situations where the State or local government has failed to protect right of the people as enumerated in the Constitution. The author encouraged his readers to make friends locally due to the “truckling policies at Washington.”[7]