The White Man's Declaration of Independence 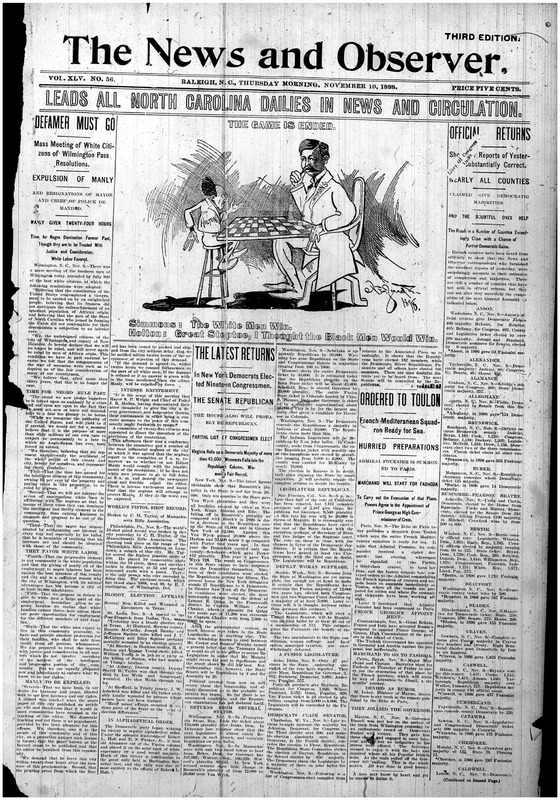 On November 09, 1898 a meeting of the best white citizens of Wilmington was held at the Court House. At the meeting, Waddell read the White Man’s Declaration of Independence which called for the expulsion of Editor Manly and his printing press. The News and Observer and Richman Planet took vastly different approaches to stories on this event.

The News and Observer on November 10 listed the resolutions they had agreed to at a meeting held the prior day. Resolution number seven claim that editor Manly’s article would have “in most communities have resulted in the lynching of the editor.”[1] The article stated that there was “no punishment provided by the laws adequate for this offense.”[2]  Nowhere in the article did Manly threaten white women, he merely pointed out that lower class white women were attracted to African American men especially mulatto men who were sufficiently attractive for white women to fall in love with, he cautioned whites to “teach you men purity.”[3] The Committee of Twenty-Five gave African American leaders twelve hours to respond to their demands if they did not answer or if they would not help then the whites “propose to go in full force at 8 a.m. and destroy the newspaper plant and forcibly expel the editor.”[4] It was feared that the African American men would attempt to protect Manly and the article stated that if that happened “the worst can be expected.”[5]

The Richmond Planet on November 26, 1898 published an article entitled “Editor Manley’s Responsibilities” in which it laid out the various things Manley can be deemed responsible for.  The article questions whether Manley violated any laws of the United States; claiming that “liberty of the press constitutes one of the bed-rock principles of the government itself.”[6]  The article claims that “so long as it worked no material injury to the individual citizen’s financial welfare, and was not the result of malicious persecution”[7] a journalist is permitted to say wherever he pleases.  If Manley went too far in his editorial, it is to be “determined by the court, not by the mob.”[8] The Planet points out that not even the President of the United States is exempt from “caustic criticism.”[9] The article claims that destroying Manley’s property violated “one of the most carefully guarded privileges of the government itself.”[10]  Manley was a victim as much as those who died in the riot, therefore he was not responsible for their deaths but “the bogus Mayor, A. M. Waddell would better ‘fill the bill.’”[11]