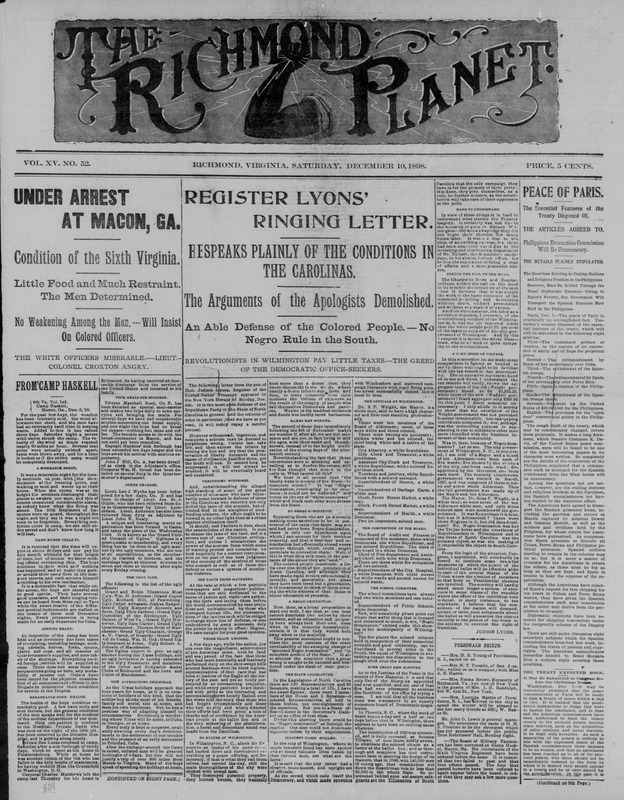 Item 786 Lyons does a good job of defending the Republican party, but his voice seemed to be lost in history for over fifty years.

The News and Observer was not the only newspaper to run highly slanted articles at the time.  The Richmond Planet published an article entitled “Register Lyons’ Ringing Letter.”[1] on December 10, 1898 that originally ran in the New York Herald on December 04, 1898. The Planet claimed that this letter was the “most able defense of the Republican Party in the State of North Carolina…and the citizens of color.”[2] The letter dealt with the most often cited reasons that the Democratic Party had for the necessity of the overthrow of the municipal government in Wilmington on November 10, 1898:  Negro domination, and the fact that the Republican Party did not pay their share of taxes.

Negro domination of the south was a fear through the time of the riot.  In fact, the Committee of Twenty-Five’s White Declaration of Independence mentions this in the preamble.  They state “We….do hereby declare that we will no longer be ruled, and will never again be ruled by men of African origin.”[3]  However, Lyons asserted that Negro domination was a myth.

Lyons deflated the myth by presenting some basic facts.  First, he asserted that the recently overthrown government was comprised of three African Americans and seven white aldermen.  He further pointed out that of the twenty-six police officers, sixteen were white, including the police chief.  In fact, the only office dominated by African Americans was “Lot Inspector,” of which there were two.[4]

The second Democratic argument Lyons attempted to puncture was that while the white citizens of Wilmington made up 66 percent of the population, they paid 95 percent of the taxes to support the city.  By comparing the aggregate tax records of both boards of aldermen, Lyons showed that the under the previous government, the board paid over three times ($1835.20) the aggregate taxes that the new board paid ($568.68).[6]  This lead him to the conclusion that “the overthrow of the Wright government was not provoked because irresponsible, non-tax paying individuals composed it” This is clearly a specious argument.  Since the majority of the board of aldermen were white in both governments (70% under Write, 100% under Waddell) the amount each paid in taxes is irrelevant.

Lyons was not above the use of inflammatory rhetoric among the facts and figures he cited.  For example, his first section labeled “PREJUDICED WITNESSES” he refers to “those in the Carolinas who recently not only defied the laws of the country, but offended God in the slaughter of unoffending citizens” and that the riot should be seen as “a crime against civilization itself.”[7]

Furthermore, while addressing the deaths of innocents, Lyons attacked the defenders of the riot and Waddell’s administration specifically.  He countered the defenders’ argument that Wilmington had never had a cleaner or more honest set of officials with his own assessment of the administration.   Collectively, they are referred to as “the crowd which calls itself the Democracy, and which made speeches with Winchesters and scattered campaign literature with rapid firing guns.”[8]