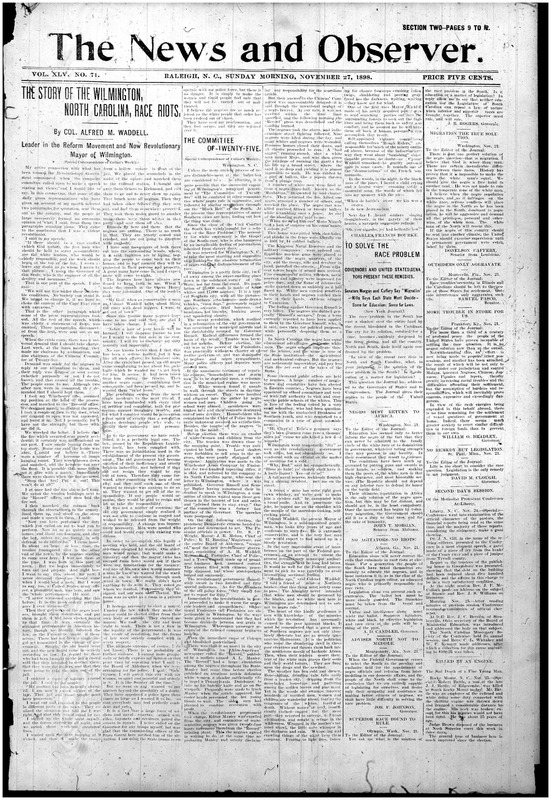 Item 771 Is attributed to Waddell however it was latter reported that it was written by a Collier's Weekly writer from an interview he had with Waddell.

Bias in the media can take many forms.  Not only is it evident in the word choices mentioned above, but in the articles that are chosen as news.  Both the News and Observer and the Richmond Planet are guilty of presenting quite slanted pieces as news.

On November 27, 1898 the News and Observer published “The Story of the Wilmington, North Carolina, Race Riots” attributed to Colonel Alfred M. Waddell, originally published in Collier’s Weekly, one of the leaders of the coup d’état and self-proclaimed “Revolutionary Mayor of Wilmington.”[1] The subject of the Wilmington race riot dominated the front page that Sunday.  Of the six columns, Waddell’s history occupies over two and has the only strong headline. The rest of the front page is taken by the Collier’s Weekly article on the Committee of Twenty-Five mentioned earlier and a survey of opinions for solving the race problem.

In this story, Waddell attempts to clarify the record concerning a speech he gave, lays out the events of the riot in the best possible light, and an argument for the legitimacy of the revolutionary government.  Waddell starts out the story attempting to clarify a speech he made before the riot. Waddell claimed that the press only quoted two paragraphs of his speech causing the nation to form “an erroneous opinion of what I said.”[2] Waddell felt that this resulted in him being viewed as “a violent revolutionist.”[3] Waddell’s issue with the content that was published from his speech was the exclusion of what he deems as “statement of facts.”[4] Waddell stated that the Governor is “the engineer of all the deviltry and meanness”[5] and if a race conflict erupted it would be the Governor’s fault.

Waddell cast the events of the Wilmington riot in the best possible light.  At one point, he claims that when they went to the Record’s office they merely planned to destroy the press.[6] However, it should be noted that in their ultimatum to the African American leaders, the Committee of Twenty-Five called for the expulsion of Manly.[7] It is difficult to believe that they altered their goals in the opening hours of the riot.

He admits to the destruction of the Record’s press and office.  However, Waddell claims that the burning of the office was an accident and cast himself and his mob as civic protectors.  He tells us that there were a number of kerosene lamps in the house that had been smashed to the floor.  He admits that it is possible that “some fellow” set it afire with a match.[8]  While this hardly qualifies as “purely accidental,” he moderates these events by claiming that they immediately shouted “Stop that fire:  Put it out!  This won’t do at all!”[9] and put out the fire before it had spread to the next building.

Waddell asserts that the people expelled from Wilmington were protected and treated properly.  He maintains that when the mob brought them to the jail, it was with the intention to destroy them.  Apparently, Waddell faced down the mob saying “My position has been radically changed. I am now a sworn officer of the law. That jail and those people must have protection.”[10]  He also claims that that he bought the prisoners tickets to Richmond, Virginia and provided an escort to the railroad station.  Although Waddell gives himself points for not allowing the prisoners to be hung, it should be noted that these men had not been tried or found guilty of any crime at this point.

In the aftermath of the riot, Waddell reports that all is calm in the city and everyone is pleased with the change of administration.  He tells us that despite the initial fear and astonishment generated by his speech at the opera house, he believes the African Americans are as happy as the white people that order was restored.  “The negroes here have always professed to have faith in me. When I made the speech in the Opera House they were astounded. One of the leaders said: ‘My God! When as a man as Colonel Waddell talks, about filling the river with dead niggers, I want to set out of town!’  Since this trouble many negroes have come to me and said they are glad I have taken charge.”[11]  While it is certainly expected that people would rejoice in the restoration of order, it is difficult to believe that the usurpation of the elected government would be taken gladly.

In “The Story of the Wilmington, North Carolina, Race Riots,” Waddell divorces himself from responsibility for the violence of the riot.  Early in the piece, he placed the blame on Manly and the African American leaders who failed to answer their ultimatum within the prescribed twelve-hour time limit:  “their reply was delayed or sent astray…and that caused all the trouble.”[12]  Furthermore, after destroying the Record’s press and office, he claims to have admonished his men to return to their homes and “obey the law unless we are forced, in self-defense, to do otherwise.”[13]  However, within an hour of going home, he claims the trouble started in the other end of town by “the negroes starting to come over here.”  In all three statements, Waddell accepts no responsibility for the violence that left an estimated fourteen dead, many injured and possibly hundreds of people run out of their homes.

Finally, Waddell presents a legal argument for the takeover of the municipal government yet fails to cite any statutes. Waddell claims that “it was not a matter of coercion: the old city government simply realized it was not able to continue in control, and wished to be released.”[14] He also claims that the old government has “become satisfied of their inefficiency and utterly helpless imbecility.”[15] Waddell charged that his government “is a perfectly legal one”[16] and alluded to the Republican Legislature, but failed to cite any laws that he followed in transferring the municipal government from the duly elected and appointed Board of Aldermen, Mayor, and Chief of Police to himself and those selected by the Committee of Twenty-Five. He stated that “men were needed who could and would cope with existing conditions,”[17] but does not acknowledge that the existing conditions that needed dealt with were the direct result of Waddell actions. Earlier in the story that was published in the News and Observer he stated that in a speech to the mob he assembled to “obey the law, unless we are forced, in self-defense, to do otherwise.”[18] This showed that Waddell is not above disobeying the law if he deemed it necessary.