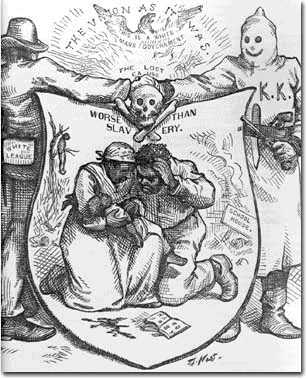 The Ku Klux Klan is known to be very active throughout the South in the years after the Civil War, notably in states like Alabama and Mississippi, but Klan activity was also very prominent in North Carolina during the post-Reconstruction years. Union soldiers occupied the South after the Civil War, but white supremacist groups still dominated the landscape politically, economically, and socially, through means of terrorism, violence (sexual and otherwise), and intimidation in the name of vigilante justice. Their focus was not solely on African-Americans, but also white Republicans, both male and female. The Klan’s ultimate goal was to uphold white supremacy in the aftermath of the abolition of slavery, and their techniques were very effective. Even though significant political elements in North Carolina resisted secession from the Union in the first place, perhaps because of the brutality and loss of the Civil War, some whites in North Carolina joined the Invisible Empire and were active in counties in the state well into the 1880s. Questions that will be addressed in this essay include: what kind of violence and intimidation did the Klan in North Carolina use against those they saw as their social and political enemies? Who did they see as their social and political enemies, and why? How exactly did these  groups accomplish the disenfranchisement of blacks and Republicans, especially with a Republican majority in thegovernment in thepost Civil War years? Howhas the Klan message been transmitted to white Democrats in the South? These questions are important to answer in order to morefully understand the forceful and cogent changes made to the South in the wake of the Civil War.

Life was often extremely hard for freedmen and women, even with Union soldiers trying to keep the peace, but when the Union soldiers ceased occupation of the South, suddenly African Americans found themselves in very desperate and dangerous situations; some found that life could be even more tragic and terrifying than during the pre-Civil War slavery years. Their homes, families, and freedoms were in a constant state of danger from the Klan, and there was little that could be done to stop these large bands of vigilantes from accomplishing their goals. Study of the drastically negative changes that took place in African American’s lives during this time period help modern historians understand why and how constant violence, intimidation, and attacks denied or limited the rights, civil liberties, and safety of African Americans and Republicans in the South until well into the 20th century when the Civil Rights Movement began to gain a significant influence in the U.S.

African Americans were not the only ones to have to deal with the threat of violence. White Republican men and women were often threatened, beaten, or mutilated for their involvement in what was often referred to as“radical” politics. To the Klan, whites who voted Republican were placing themselves alongside and as culpableas blacks themselves, and deserved to be treated the same. Although history mostly focuses on the African American families that were endangered during this time period, the violence white Republicans and their families dealt with from the Klan was often equally critical with that directed toward blacks.

African Americans and white Republicans did not always stand idly by while groups like the Klan attacked and intimidated them. Many freedmen and women realized they must protect themselves and their families by any means necessary from the cruel and murderous crusades of the Klan. Many African Americans took up arms and defended themselves and their homes from violence when local law enforcement would not, or could not, help. Because of their resistance to the KKK, testimony was gathered by the government and arrests were sometimes made. Yet the involvement of the federal government had only limited success, and blacks and whites alike took up arms against the Klan in order to defend themselves and their families against attacks and oppression. White Republicans in the South defended themselves and their property from vicious raids, just as blacks did, and some stood up for the rights and safety of their African American neighbors along the way.