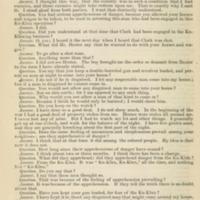 Page one of Essie Harris Testimony via the Report of the Joint Select Committee to Inquire into the Condition of Affairs in the Late Insurrectionary States. July 1, 1871. 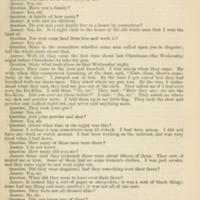 Page two of Essie Harris Testimony via the Report of the Joint Select Committee to Inquire into the Condition of Affairs in the Late Insurrectionary States. July 1, 1871. 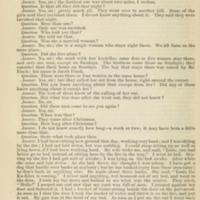 Page three of Essie Harris Testimony via the Report of the Joint Select Committee to Inquire into the Condition of Affairs in the Late Insurrectionary States. July 1, 1871. 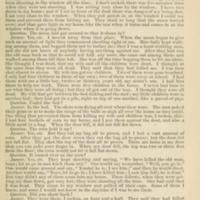 Page four of Essie Harris Testimony via the Report of the Joint Select Committee to Inquire into the Condition of Affairs in the Late Insurrectionary States, July 1, 1871. 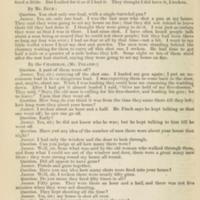 Page five of Essie Harris Testimony via the Report of the Joint Select Committee to Inquire into the Condition of Affairs in the Late Insurrectionary States. July 1, 1871. 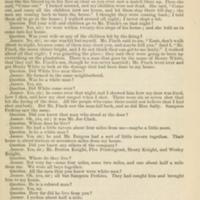 Page six of Essie Harris Testimony via the Report of the Joint Select Committee to Inquire into the Condition of Affairs in the Late Insurrectionary States. July 1, 1871.

African Americans, however, did not stand idly by while all this chaotic violence surrounded them. Many formed groups and militias to patrol areas and keep their neighbors safe. They were usually greatly outnumbered, though, and the best they could do was to deter attacks by Klan members. Some of the records from the Freedmen’s Bureau show that sometimes black men would assault white men, but the reason was never stated. The number of acts of white on black violence was more than double that of black on white violence. While that number may be low due to whites being unwilling to report an offense to the Freedmen’s Bureau, or perhaps a lack of black on white violence altogether, the evidence that is available indicates that most black on white attacks are assault and battery, whereas white on black violence ranges from rape to murder. The reasons for the assaults are rarely given, and it is hard to determine whether or not the assault in question was a form of defense, revenge, or  random violence. The punishments given to the African Americans who assaulted white men were normally fined $10.00, but often the Klan would see to it that they were “justly” punished for their crimes against whites (Freedmen’s Bureau).

One personal account of resistance to Klan violence was given by a Mr. Essie Harris, a black man lived in Chatham county. The KKK broke into his house and stole his guns, which was a common thing for the Klan to do to blacks in the South. After this incident, Harris tells Congress that the Klan returned a few nights later and began shooting a hail of bullets into his house where his wife and children were sleeping. Harris says that he thought his wife and children were dead, and the only thing that saved his life was the fact that he was hiding behind large bags of corn that was barricading the door. No one in Harris’s family was hurt, and once the shooting began to dwindle Harris opened the door and shot at the Klan members, injuring one. Harris was not alone in his attempt to get the Klan off of his property. His wife’s former owners during the pre-Civil War slavery years, Mr. Finch and his sister Ms. Finch also lived on the property and came to help the Harris family when they saw the horde of Klan members on their lawn. Harris reported that Ms. Harris was running wildly through the crowd of Klansmen, yelling that the Harris family were good people and should not be harmed. Harris said in his testimony that the Finch’s did not leave until all the Klansmen were gone, and made sure that the Harris family was still alive (Report 88-89). Sometimes it was not just African Americans who resisted the violence, but also their white neighbors who would try to intervene to help. A form of black resistance could be said to be achieved through the ability to testify against their attackers. That was a liberty not known to African Americans in any part of the country until 1865. Through testimony to Congress, African Americans could finally have their side of the story told to the entire nation.