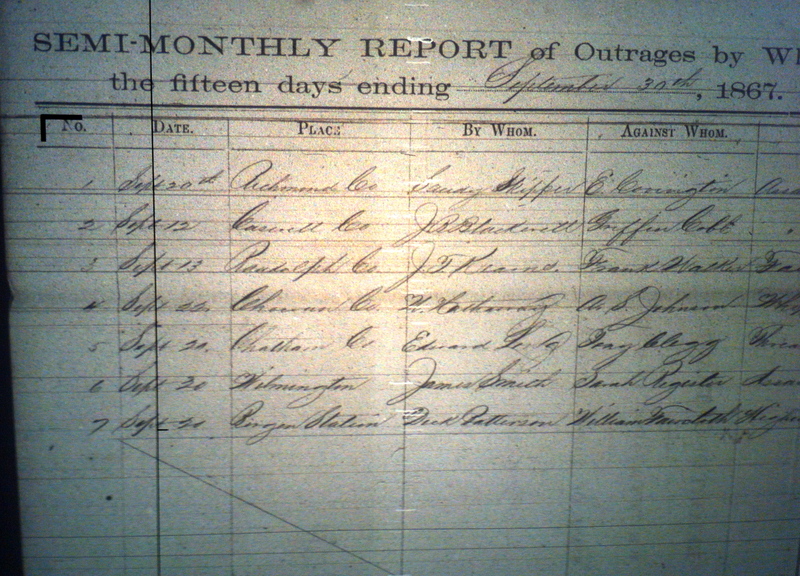 The Bureau of Refugees, Freedmen, and Abandoned Lands perhaps kept the best records of outrages committed on blacks by whites. Whether the accused whites were a part of white supremacist groups or not, the data collected from North Carolina shows a terrifying and violent time in its history. In multiple counties, unknown groups of white men burned barns, houses, and even a schoolhouse for African American children. In one county, eight houses belonging to freedmen were burned to the ground, and the culprits were never caught. Beatings, however, were the most common forms of violence. In Wayne county on August 2, 1866, four white men brutally beat a freedman named Barry Lewes, a discharged soldier. On February 18, 1867 in Wake county, a white man assaulted a black man, but was acquitted of all charges. Sometimes the outcomes resulted in a case being diverted to civil authorities, but often no other information was taken on whether the perpetrators were punished or not. One case in Sanford county on April 26, 1867, unknown parties of white men murdered a black man named John Washington and his daughter (Freedmen’s Bureau). They were never caught or prosecuted. But in Wake county later in the same year, six white men murdered a black man and they were arrested and sent to jail. Many of the unknown white men were never caught, and they were likely from white supremacist groups like the KKK, as some wore disguises in order to keep from being identified.

The Report of the Joint Select Committee to Inquire into the Condition of Affairs in the Late Insurrectionary States helped put together a historiography about brutal violence that took place in North Carolina during Reconstruction. One piece of testimony shows the brutality that whites were willing to exert on people who shared different beliefs. A newspaper editor from Rutherford county, J.B. Carpenter, told the superior court that reports of outrages were often sent to him. Mostly the outrages tended to be whippings, but beatings and attempted murders often happened as well. A black man named Aaron Biggerstaff was whipped twice by a group of disguised white men. Biggerstaff identified one of the horses the attackers rode on as being definitely that of the Cleveland county Sheriff. On his way to give testimony to the United States Commissioner about these attacks he was once again beaten by the perpetrators. The men were recognized this time, Biggerstaff and his family identified them and they were arrested (Report 19). Sometimes the groups of white men were identified and prosecuted, but unfortunately that outcome was few and far between.

The violence conducted by the Klan was often sexualized in nature. Although the Klan openly stated their reason for existing was to protect white women from black men, some had no moral qualms about their members sexually abusing or mutilating black men and women in order to show their authority. Often, Klan members would both assault and rape black women (Hodes 66). An example of sexualized violence was given in by the U.S. Commissioner from Raleigh, A. Webster Shaffer, concerning a freed woman named Frances Gilmore. A group of disguised attackers had assaulted her by whipping and beating her, then taking her clothes off to be whipped with a board, and finally forcibly having her pubic hair burned off before she was cut multiple times with a knife (Report 36-37). Gilmore was unable to identify her attackers due to their disguises, and no arrests were ever made. Another example of sexualized violence was committed on a black man who, because of a simple labor conflict, was forced to cut up his genitals with a knife (Hodes 65). The Klans use of sexualized violence on women and men shows their willingness to assert their social authority over blacks, by any means necessary.

The testimony of J.B. Carpenter goes on to state that the election of 1870 had taken place recently and the result was a Republican majority. Carpenter noted that the amount of outrages went up exponentially after the election. He also noted that the victims of violence were all Republicans, and all attacks were committed by men in disguises (Report 26). Other questions posed to Mr. Carpenter about politics in Rutherford county show the close division of Republican and Democratic voters in that county, which resulted in high Klan activity for the region. Carpenter states that Republicans had the majority vote by two or three hundred people. One of the questions for Mr. Carpenter asked if the hundreds of whippings that were reported in the county had anything to do with political beliefs and the election. Carpenter responded by saying that every single person who reported being whipped had said their attackers told them they were being whipped because they were Republican and that their attackers urged them to not continue voting Republican. Testimony from a railroad contractor named William R. Howle describes the KKK threatening him about his voting rights.  Howle states that the KKK threatened him “several times” and was told to “leave the state and not interfere with North Carolina politics.” (Report 56). The Klan seemed willing to use whatever means necessary to regain political dominance of the South, even if that meant instilling terror via sexual abuse.