In the 1898 Democratic Campaign in North Carolina, party members called for the redemption of the state.  They reflected on the failure of earlier party to restore the proper order of the state, and called for new followers to complete the mission.  To kick off the 1898 Campaign in May, party loyalist Charles Aycock stated the importance of the redemption of the state as ranking higher than that of the ensuing Spanish-American War. (Item #63)  Soon thereafter, references to redemption made their way into the Democratic Party Handbook, as Democrats recounted the failures of Democrats in the 1860s and 1870s, and promised to return the state to its former order. (Item #382, 8, 38)  In an editorial in the Raleigh News and Observer five days prior to the elections, Democratic chairman Furnifold Simmons captured the imagination of the historically-oriented audience and called for a more-perfect redemption of North Carolina.  He pleaded, “in view of the present terrible crisis; in view of the incalculable consequences to follow to us and our children from the failure to redeem the state from the rule of the men who have debauched and despoiled it, I feel justified in appealing to all good men to close their places of business on the day of election and give that day, exclusively, earnestly, solemnly, to the state and the great cause for with we struggle.” (Item #552)  Thus the Democratic Party in 1898 did not recognize the “redemption” of the South in 1877 to have been effective.  Their White Supremacy Campaign, of which declarations of “negro domination” were central, became a direct call for true Redemption.

On Election Day, November 8, 1898, Democrats won 93 out of 118 seats in the North Carolina House of Representatives.  Republicans pulled in a mere 22 seats (mostly in northern counties) and the Populists won 3. (Item #555)  It was a sweeping victory for Democrats.  During the campaign the Democrats promised to never allow the state to revert to “negro domination” again.  Like the Redeemers of the 1870s, they charged blacks with incompetence in governance, and claimed, “it is a crime against the negro as well as an outrage upon the white men to again turn those counties and towns over to Republican rule, for Republican rule…means negro rule; and negro rule is a curse to both races.” (Item #382, 32).  Realizing the North Carolina stood out as the only state left to maintain black suffrage, the General Assembly under Democratic control swiftly moved to enact legislation to prevent a reversion in power.  In June 1900, the General Assembly passed an amendment to the state constitution which greatly voter registration.  Complete with a poll tax, literacy test and grandfather clause, the suffrage amendment effectively disfranchised African Americans, returned North Carolina to a one-party state, and ushered in an era of Jim Crow oppression.  A political change more pervasive than in 1877, finally, in 1900, North Carolina was Redeemed. 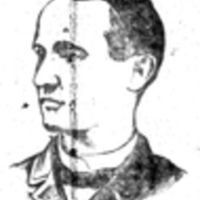 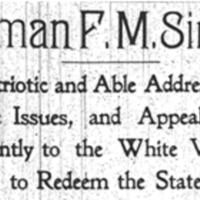 Item 552: "Chairman F.M. Simmons Issues a Patriotic and Able Address, Summing Up the Issues, and Appealing Elo-Quently to the White Voters To Redeem the States" Raleigh News and Observer, November 3, 1898 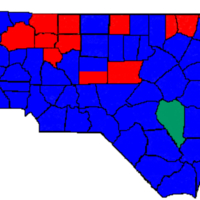