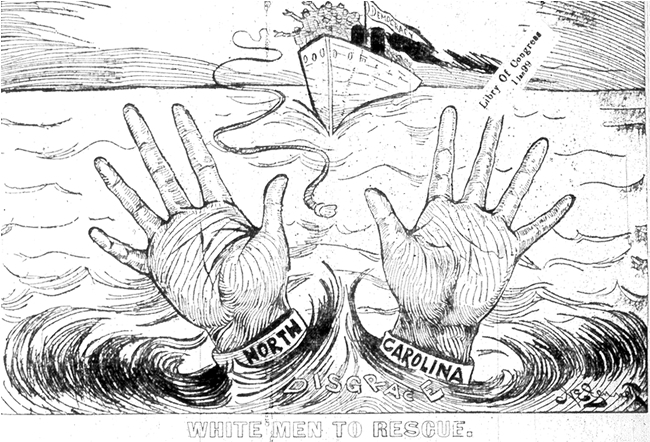 In 1898 the Democratic Party of North Carolina embarked on a brutal campaign to win back the state from fusionist officeholders. In what has been termed the White Supremacy Campaign, the Democratic Party Machine, as Populists labeled it, relied on the use of the press to broadcast the party platform.  Through the use of newspapers, such as the Raleigh News and Observer, the party played on and accentuated fears of “negro supremacy,” or “negro domination,” and called for the return of the state to the white man.  The Democrats promised to never allow for such domination to return to the state, if elected, by implementing changes to the election laws.  But North Carolina, by any means, could not accurately have been thought of as being under “negro domination.”  Although the gerrymandering of the General Assembly in 1872 concentrated the black populous into the Second Congressional District, successes by African Americans in that district did not transcend beyond county office positions and one United States Congressman.  The state as a whole remained largely under white democrats between 1877 and 1894.  By playing “the race card”— and playing it well—during the 1898 campaign, however, the Democrats made a successful return to power in the November elections and quickly set into motion their plans for disfranchisement.  By August 1900, the Democrats completed their mission to return North Carolina to a more permanent white state, as the legislature ratified an amendment to the NC Constitution which effectively disfranchised African-Americans and poor whites.  At this junction in history, North Carolina joined its fellow Southern states in moving into the era of Jim Crow.

The White Supremacy Campaign leaves the curious onlooker with many questions.  Why, if North Carolina was not under any real threat of black rule, did the Democrats resort to a campaign based on race and disfranchisement of the black vote?  What was the White Supremacy Campaign about and why was it successful?  The Democratic Handbook of 1898 is particularly useful in answering these questions.  When combined with other primary and secondary sources, it can be demonstrated that the White Supremacy Campaign was a reaction to the successes of fusionism in 1894.  While 1877 is thought to have been a moment of Redemption in the South, and while the white democrats successfully held the state under their control until 1894, the fusionist victories of that year proved to the democrats that North Carolina had not actually been redeemed back in 1877.  Because black Republicans helped the fusionist victories in 1894, the black vote had to be eliminated.  The White Supremacy Campaign, then, with its ultimate goal of disfranchisement, became the key to ushering in a second, more permanent Redemption of North Carolina.

Specific information about the White Supremacy Campaign and the subsequent voter registration laws can more aptly be deduced from primary sources.  The North Carolina Collection of the University of North Carolina is particularly useful because it contains a digital collection of sources related specifically to the North Carolina campaign of 1898.  Newspaper articles from Democratic and Populist press, political cartoons, the Democratic and Populist Party Platforms, and 1898-1901 demographics and statistics are particularly useful to the historian attempting to piece together the politics of the campaign.  From these sources—particularly the Democratic Handbook of 1898—in addition to secondary works, a story of why the Democrats fought for white supremacy and disfranchisement emerges.  It is a story of a complicated idea of “negro domination” and a more historically-oriented goal in disfranchisement.  Having lost the state for four years due to the fusion of Populists and Republicans, the Democrats sought to use white supremacy as a means to drive a wedge in the fusion ticket along the color-line and finally, more significantly, redeem the state.