A Common Representation of the North

Despite the fact that their publishers had come to represent two different political parties by 1862, it would be inaccurate to imply that the Weekly Standard and the Register did not hold some common ground in the articles they printed. Perhaps the biggest similarity is in how they presented the Union to their North Carolinian audience. In several articles published throughout that year both the Standard and the Register seemed to have been actively working to present the North as a crumbling Union that would not be able to maintain a long fight against the South.

A great example of this can be found in an article published by the Weekly Standard entitled “Northern Politics.” The article portrays the North as fractured in its support for President Abraham Lincoln, and states that “Public sentiment (of the North) is suppressed by the iron hand of despotism but we trust the pent-up wrath of conservative people will soon break forth in thunder tones to the utter destruction of the Lincoln dynasty.” (Item 558) It goes on to state that the preservation of the Constitution was a delusion the people of the North would soon awake from and force an end to the war. Similarly, an article published by the Register in October of 1862, entitled “Lincoln’s Emancipation Proclamation” states that with his proclamation freeing slaves in Confederate states, Lincoln had effectively driven the Border States support the Confederacy. (Item 556) Among the nearly countless other examples of articles published in 1862 that distcredited the power of the North is the Register’s “What the War is Costing the North.” Although the amounts were possibly exaggerated, this article focused on how the North was amassing an unbelievable amount of debt by fighting, and that the general population would likely question the validity of the war when they realized its cost.  (Item 557) Finally, the Standard’s reprinting of the London Times’ “The President’s Message” also implied that an incompetent Lincoln administration would drive Great Britain to support the Confederacy. (Item 559) From these examples, and the many others like them, it hardly seems questionable that these articles were attempts by both the Standard and Register to lift morale in North Carolina and feed the idea that the Confederacy would soon triumph. 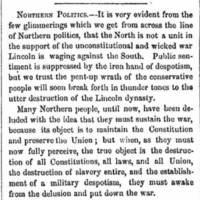 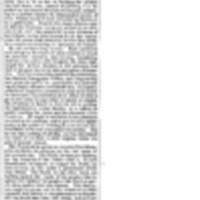 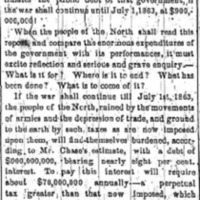 Item 557: "What the War is Costing the North," Weekly Raleigh Register 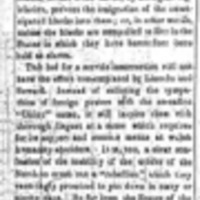