Contention over conscription continued between the Raleigh Weekly Register and the Weekly Raleigh Standard throughout the rest of 1862 and the years that followed, but conscription was not the only topic that created tension between the two newspapers. Desertion seemed to divide the two papers as well. Although subtle,  this tension can be found in their reporting on deserted and absent soldiers, particularly deserters’ trials and executions. By the end of the war in 1865 about 24,000 North Carolinians deserted the Confederate Army, the highest number of desertions in all Confederate states. Desertion was a major problem in Civil War-era North Carolina. (Mobley, 56)

The Register can be read as more critical of soldiers who were reported as absent or as deserters, shaming these soldiers to discourage others from deserting. An example of one of the tactics used to shame deserted soldiers can be found in the lists printed by the Register. These lists named the soldiers, gave their home counties, and sometimes even offered rewards for their return. (An example of one these lists can be found in Item 573.) Other articles aimed to make examples out of deserters, especially those who had been executed by the army. “Executions for Desertion,” published by the Register in September 1862, describes the execution of two South Carolina soldiers who deserted and, as the title implies, were executed. It states, “We trust that these severe examples will be sufficient to deter others from committing similar offenses.” (Item 420)

The Standard, on the other hand, having been against the forced enlistment of North Carolina’s male population from the beginning, seems to have taken a more understanding attitude toward desertion. While advertisements offering rewards for the return of soldiers can be found among its pages, the Standard printed fewer lists like those in the Register. Furthermore, when describing the executions of soldiers, authors at the Standard tended to give them more humanity, perhaps in order to garner more sympathy from the public. An example of this can be found in “Deserters Shot,” which was published in November of 1862. (Item 421) Unlike that of the Register, this article names the men who were executed, and describes how they acted in their final moments. Doubtless, the description of weeping soldiers made it more difficult to view these men as the enemy, especially when so many North Carolinians clearly held a common desire for their loved ones to run away and come back home. 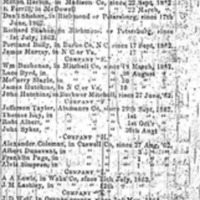 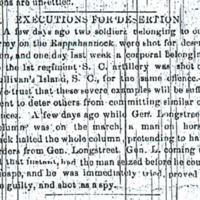 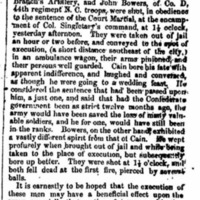