Glorification of the Army and the Call for Volunteers 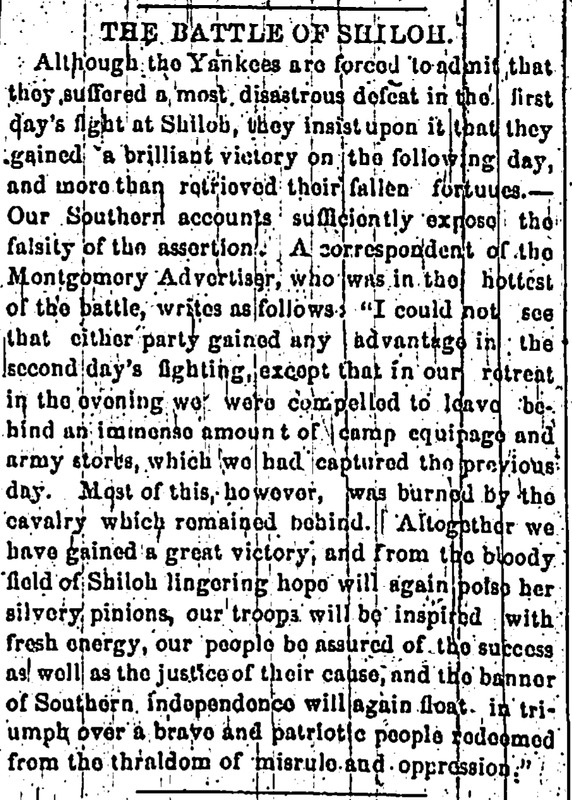 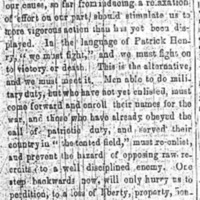 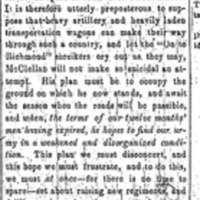 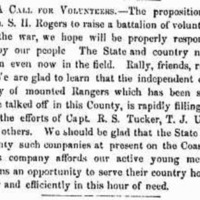 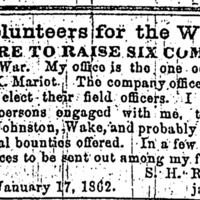 Throughout 1862, the Weekly Standard and the Weekly Raleigh Register each glorified the Confederate armies. In the early part of the year, before the passage of the Conscription Acts in April, 1862, this glorification signifies more than patriotic celebration of the armies aimed at maintaining and raising public morale.  These articles also encouraged more men to volunteer for the Confederate army.

Several examples of articles can be found in both the Standard and the Register that worked to glorify the actions of the Confederate Army. A great example of this can be found in the Register’s “The Battle of Shiloh.” This article states, “Altogether we have gained a great victory, and from the bloody field of Shiloh lingering hope will again poise her silvery pinions, our troops will be inspired with fresh energy, our people be assured of success as well as the justice of their cause, and the banner of Southern independence will again float in triumph…” (Item 565) Interestingly, contemporary historians generally view the Battle of Shiloh as a Union victory that allowed for their further advance. It seems likely that though they may not have really known the true outcome of the battle, Syme and Hall portrayed it as a tremendous victory to boost morale in North Carolina, which had began to lag after the initial excitement of the war. More importantly, it is likely the article aimed to not sway but draw in potential volunteers.

“After Manassas, the fighting seemed to wind down. For the next several months, there were no large or decisive battles. As the conflict appeared lose momentum, volunteering slowed.”  (Hilderman, 19) As time went on, it became increasingly apparent that the war was not going to be short, and it seems that in many ways the newspapers made it one of their duties to encourage new volunteer soldiers to join and enlisted soldiers to keep fighting. A remarkable number of articles reflect this in both the Standard and the Register, especially in the months before the passage of the Confederate Conscription Acts in April 1862. Often both papers published blunt articles that state the urgent need for more soldiers in the Confederate army. An example of this can be found in the Register’s “Volunteers and Re-Enlistment.” This article clearly worked as a call to arms, stating,

Men able to do military duty, but who have not yet enlisted, must come forward and enroll their names for the war, and those who have already obeyed the call of patriotic duty, and served their country in ‘the tented field,’ must re-enlist…One step backwards now, will only hurry us to perdition, to a loss of liberty, property,   honor, and everything that which renders life valuable. (Item 564)

This article was intended to spur men into battle by frightening them. The author implores the men of North Carolina to serve, warning them of the consequences of inaction. (See Item 563 for another example of scare tactics being used to encourage enlistment.) The Standard’s “A Call for Volunteers,” published in January 1862, took things a step further and called for all men, even those of wealth and means, to sacrifice all they have for the war effort and to never give up. (Item 567) Other articles read more as advertisements. An example of this can be found in the Standard’s “A Call for Volunteers,” which describes the efforts of an Honorable S.H. Rogers’ attempt to raise new regiments for the Confederacy. (Item 568) It described how enlistment would result in honorable service to the country in a time of need. (An actual advertisement ran by Rogers can be found in Item 562.) In the end, it seems likely that both papers were successful, at least to a degree, in boosting morale for the North Carolina home front. The papers were probably also successful in encouraging at least some men to join the Confederate Army.