The Standard's Impact and the Election of Vance

After examining both the Weekly Raleigh Register and the Raleigh Weekly Standard and realizing both their similarities and differences, one might question which had greater influence in the state. As described in the first section, the Standard grew tremendously in popularity under the direction of William W. Holden. Given its broader readership (something alluded to even in the Register, Item 571), it should come as no surprise that the Standard held a greater amount of influence over North Carolina’s population. The campaign and subsequent election of Zebulon B. Vance indicates the Standard’s level of influence on the state. The Standard supported Vance throughout the election process in the second half of 1862.

Vance ran in the election as a Conservative, which makes it only logical that he would have had backing from the Standard and would have drawn criticism from the Democratic Register. An example of both the Standard’s support and the Register’s criticism can be found in an article published by the Standard in June 1862, entitled “Attacks on the People’s Candidate.” (Item 574) The title alone promotes Vance as a man of the people, but the article goes on to chastise Syme and the Register for stating that Vance was only pursuing his own ambitions of trading the dangers of battle for “a snug civil office.” The Standard then shifts its focus to promoting Vance by stating, “Col. Vance has never shrunk from either the privations of camp life or the dangers of battle… But Col. Vance would prove himself equal to the crisis, whether in war or in peace. He is not only a hero, but he is a statesman.” In the end, the actual role of the Standard in the election of Vance in 1862 can only be speculated. Articles in the Standard may have merely reflected the wishes of the people, but it seems safe to say that the Standard held at least some sway over the population that would have otherwise received its information on the candidates from the Register. 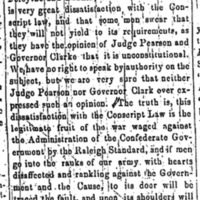 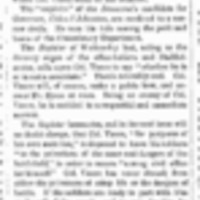 ← Acknowledging Desertion
Conclusion →
The Standard's Impact and the Election of Vance