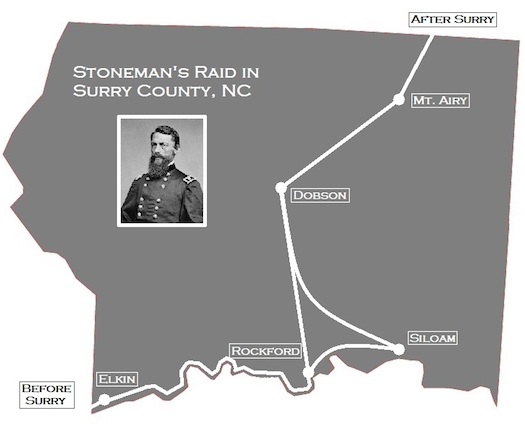 On March 30, 1865, the only invading force of troops to ever travel through Surry County, North Carolina, crossed the Yadkin River from Jonesville to Elkin led by General George Stoneman. This raid was part of a plan by Union Commanding General Ulysses Grant to cripple Confederate motivation during the latter part of the American Civil War. Within Surry County, the fact that Union troops traveled through the area is well known, but many people do not know the details of the raid or its significance. In terms of the overall history of the Civil War, the trip through Surry County seems insignificant, but it contains many examples of interactions between the Union troops and local residents. There is little historical work on Stoneman’s Raid in general, let alone Surry County’s place within the raid. The bulk of the current scholarship focuses on a few of the stories of the troops in the area, without placing them into their larger historical context. This exhibit focuses on the movement of Union troops through the area, and how they interacted with locals. Overall, this project aims to show the significance of Surry County in Stoneman’s Raid. Unlike the other areas touched by the raid, Surry escaped without major damage and devastation, despite the animosity between the raiders and local civilians.

Click on the boxes in the image above to visit the page for each geographic location, or use the navigation bar to the right.