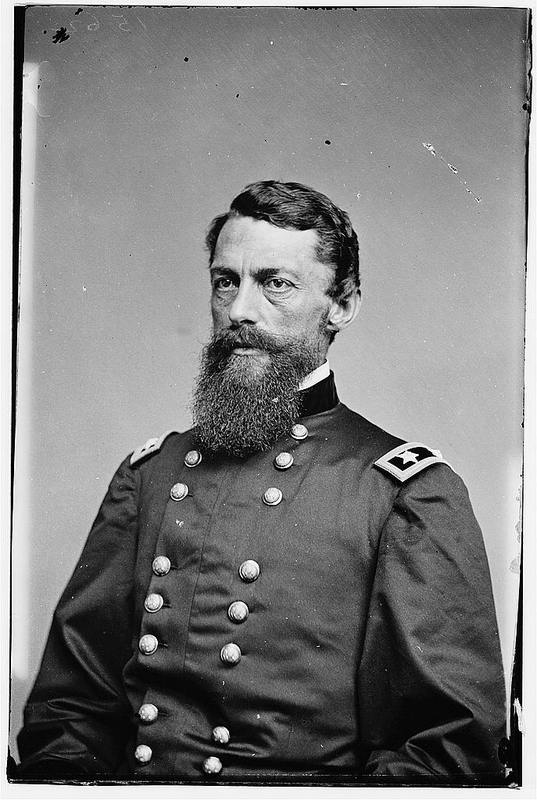 The story of Stoneman’s Raid cannot be told without information on Stoneman himself. George Stoneman was a native of western New York and a career military man. He attended the United States Military Academy at West Point from 1842 to 1846, when he joined the Army upon graduation. He served in the West prior to the outbreak of the Civil War and, according to Chris Hartley, “…carried a reputation as a solid administrator, organizer, and disciplinarian who cared for the welfare of his men and animals.” Stoneman also developed a case of hemorrhoids around 1855 that would remain a persistent problem for the rest of his life. Despite the extreme discomfort he faced, Stoneman stayed in the military and served in several different capacities in the early days of the war. Eventually, Stoneman became the leader of the Union Cavalry Corps, a position in which he took two major blows to his reputation as a military leader.[1]

In April of 1863, Stoneman led a raiding party into Virginia. This raid was under the command of General Joseph Hooker, and the primary directive was to strike strategic points around Richmond and Chancellorsville while also inflicting “a vast deal of mischief.” According to Hartley, “On May 5, Stoneman decided his troopers had ‘accomplished all that we were sent to perform.’” When his troops returned to the Union lines, however, he discovered that most of his superiors felt he had failed his objective by not supporting Hooker’s infantry and not trying to take Richmond when he had the chance. This was the first major blow to Stoneman’s reputation, which would haunt him for the rest of his career.[2]

Another incident that plagued Stoneman was the failed raid on Macon, Georgia in July of 1864. In his attempt to raid the town, Stoneman was stopped by a well-placed Confederate force comprised of the Macon-Area Home Guard and the Georgia Reserves led by General Howell Cobb. Stoneman unsuccessfully tried to shell the city into submission before realizing that a Confederate cavalry unit was closing in on his rear. This unit, under General Alfred Iverson, eventually trapped Stoneman’s troops, and Stoneman himself was forced to surrender and be taken as a prisoner of war. This event devastated Stoneman’s reputation as a military leader, but he was taken under the wing of a senior Union General, John Schofield, upon his exchange from Confederate hands.[3]

Schofield gave Stoneman his last opportunity to revive his reputation with a raid on Saltville, Virginia, a major source of Confederate salt, and the small Confederate forces of East Tennessee. Unlike his previous endeavors, this raid proved to be an overwhelming success. According to Hartley, “Stoneman’s Troopers laid waste to the saltworks around Saltville, the lead works around Wytheville, Virginia, and the ironworks at Marion, Virginia.” The success in Virginia proved to be the salvation Stoneman’s reputation needed, and laid the basis for his participation in the upcoming raid into North Carolina.[4]