Public Memory of the Raid 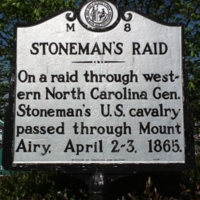 There are many remembrances of Stoneman’s Raid in Surry County. While the raid caused some destruction and loss of property, the records show that the bulk of Surry County’s residents were not affected to large degree. In the years following the war, stories such as “the Battle of Siloam” attempted to glorify the local resistance to the raid.[1] For generations, stories of locals successfully outwitting the Union invaders were prevalent in many families. The Dobson resident who told the raiders his children had scarlet fever is an example of such a story.[2] As mentioned earlier, horses, food and clothing were the most common items taken, and most of the residents fared well at the hands of the raiders.

The most surprising aspect of the way Surry residents remembered the raid is that they did not seem to condemn the Union soldiers for their actions. In a 1918 Mount Airy News article on the raid, the author related the mercy of the raiders:

What we want to impress upon our readers is that while we were in the hands and at the mercy of an alien army, and army whose comrades were being shot to pieces by our fathers and brothers, they lived on our substance, but made no attempt to terrorize us. There was not a home desecrated or burned; not a woman was violated; the fanes of our faith were left untouched, and the country was in no way devastated.[3]

In 1990, another article, entitled “Palmer’s Brigade Surprised Southerner's [sic.] with Compassion,” related, “Treatment of the citizens by Palmer’s Brigade on the north side of the river evoked the surprise of the residents who feared much harsher treatment”[4] Overall, the raid is not remembered for being a terror to the people of Surry, but as the time the Union Soldiers came through, took horses, food, and clothes, then left.

← Raid After Surry
Conclusion →
Public Memory of the Raid