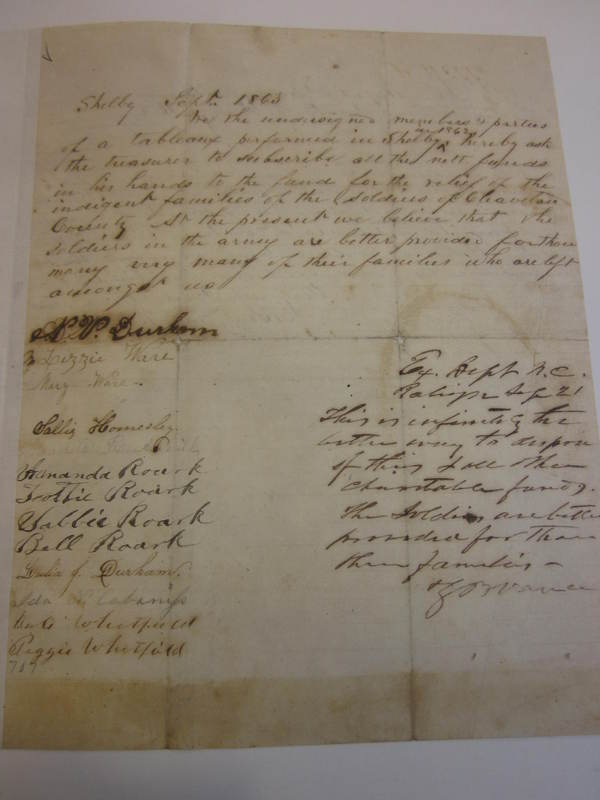 War is a gendered activity, and the call to war for the Confederacy highlighted the importance of gender in southern society. Confederate leaders drew on antebellum notions of gender in their efforts to unite southerners behind the war effort. The attack to the South from the North threatened the southern way of life. The end of slavery meant the destruction of the southern household, the dominant political unit. At first, the Confederacy called upon the citizens, white men, to join the war. Confederate propaganda promoted the war as a means to protect white women and the rights of masters. As the demands of the war grew, Confederates turned their attention to white women. Confederates then turned towards white women as patriots of the new country. Before the war, white women did not receive political acknowledgement, but in the call to war white women soon had political roles as patriots.

The Confederate cause capitalized on gender ideology to call soldiers to war. Historian Robert Westbrook argues that white women became “objects of obligation” in the Confederate call to the war. [1] More than slavery or states' rights, white men went to war to protect white women. As one North Carolina colonel stated, “So long as we have such wives, mothers and sister to fight for so long will this struggle continue until finally our freedom will be acknowledged.” [2] White women soon became the center of the call to war.  McCurry argues that protection of white women has two parts: spatial and sexual. Spatial protection included home and hearth, and sexual protection included purity and chastity. The Cause called upon white men to protect white women through military service. 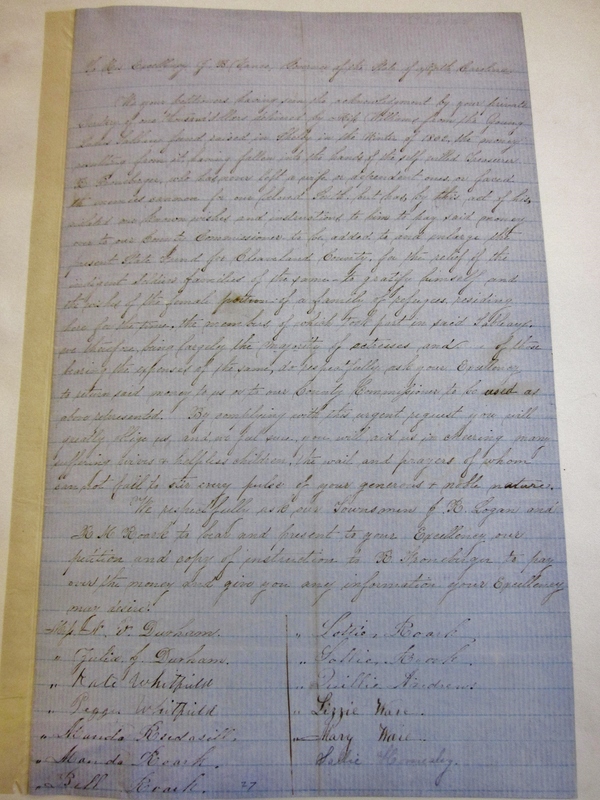 Propaganda for secession often positioned the violation of homes as a violation of master’s rights. Terms often used included “invasion” or the “pollution” of white women. [3] A Richmond soldier stated his purpose for fighting, for the protection of “the fair daughters of my own native state…from Yankee outrage and atrocity.” [4] Spatial protection made the war an individual fight. Unlike in the North, where men fought for country, southern soldiers fought to protect their mothers, sisters and daughters. [5] Fighting for protection of the home united all classes of southern white men to the Cause. D.T. Pound, a Confederate soldier, wrote to his parents stating, “I shall feel like I am fighting for home sweet home.” Home in the South meant a household full of dependents. So protection of the home extended to the protection of property, including human property. The North threatened to disturb the home as an economy by freeing the labor that the plantation utilized. [6]

Successful rhetoric invoking protection of white female purity demonstrated the gendered nature of the Cause. A young Confederate Edwin Bass stated “’Tis glorious to die for one’s county and in defense of innocent girls and women from the fangs of lecherous Northern hirelings.” Sexual protection only applied to white women and white men were their only protectors. The sexual protection also took on a racial component; many southerners connected slave revolts, like Nat Turner’s 1831 rebellion, to the rape of white women. The threat of rape epitomized women’s dependence on men for protection. Black Republicanism not only encroached on white men’s dominance of the public sphere but also threatened white men’s sole control of white women. Sexual protection was not just about preventing rape but protecting white man’s exclusive access to white women. [7] While propaganda exaggerated the real threat to white women, the protection of white women continued to permeate race and gender relations in the South for years to come. 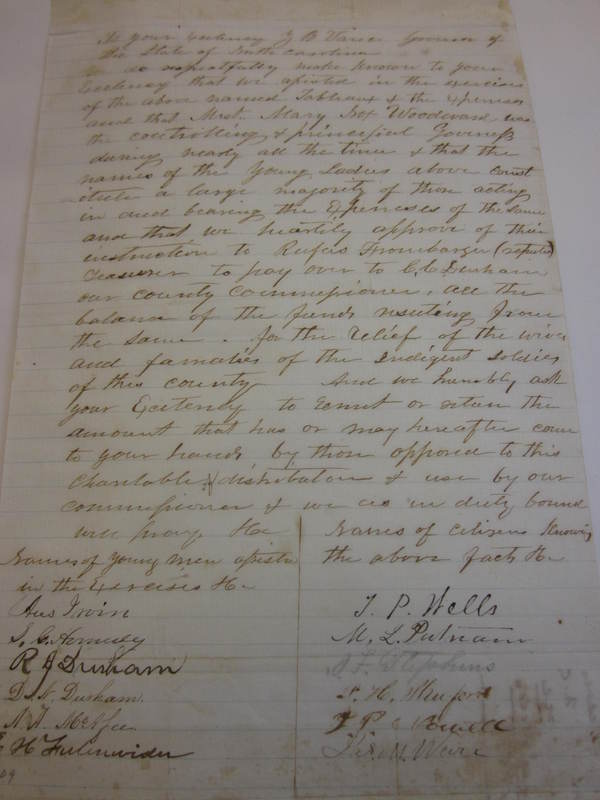 The advantage of this twofold protection rhetoric was it united rich and poor white men for the cause because all white men had the duty to protect. Lee Ann Whites argues “slaveholders and non-slaveholders alike, in their defense of the Confederacy was their defense of a common social construction of manhood as largely autonomous and self-directing household heads.” By utilizing white women as objects, the Confederacy could unite all white men. [8] The Cause was about protecting the social order: men as heads of households with women and slaves subordinate to them.

Both men and women praised the ideology of female sacrifice as patriotism. Unlike white men, white women’s call to the Cause was idealistic and broad. It started in the wealthy classes, but as the need for manpower increased, all classes of white women were encouraged to sacrifice for the war effort. Much like the male call to war, the hegemonic idea of female patriots and sacrifice was “classless.” Throughout the South, discourse praised female sacrifice as a natural extension of female virtues. Self-sacrifice was a traditional part of female roles but at an individual level. The war expanded sacrifice for the Cause not just for the family. The popular Confederate novel The Trials of a Soldier Wife explained female sacrifice as “Woman can only show her devotion by suffering, and though I cannot struggle with you on the battle-field, in suffering as I have done, I feel it has been for our holy cause.” Popular culture emphasized the best way a woman could support the cause was through sacrifice. The Confederate government also saw the importance of female patriotism. Once men enlisted, women needed to keep men content with the Cause. The government encouraged women to write upbeat letters and keep men’s morale up. [9] Throughout the war, women’s relationships to patriotism changed as conditions on the home front worsened. 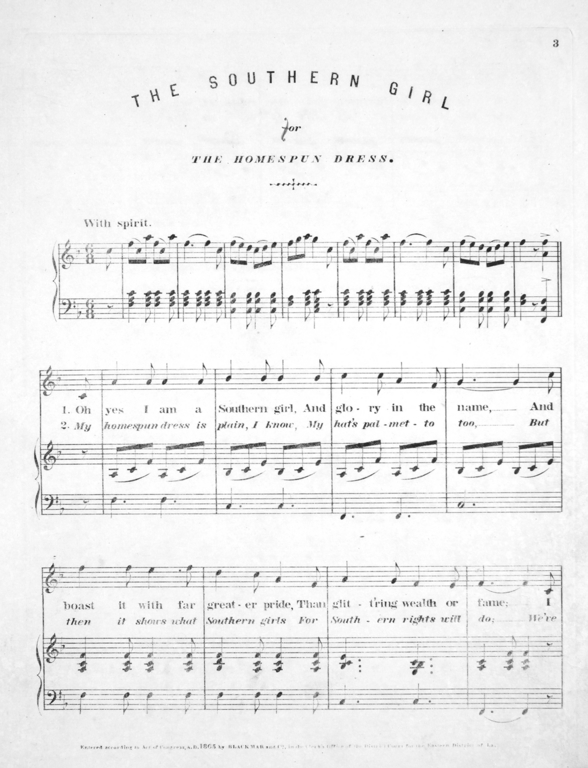 The popular Civil War song “The Homespun Dress” by Carrie Bell Sinclair exemplifies how gender roles infused war rhetoric. The song praises women for wearing homespun dresses in support of the war. Sinclair praises women’s support for the cause “The homespun dress is plain, I know, my hat’s palmetto too; / But then it shows what Southern girls for Southern rights will do.”  Public and private combined in the use of homespun as politics. Women could not fully move into the realm of politics but no longer remain protected in the private sphere. The song praises southern men “We have sent the bravest of our land to battle with the foe.” Women often praised men for being brave protector of the South. Throughout the song, Sinclair wrote that brave men in battle would win the heart of a lady. This statement enforced the norm that women wanted a protector who was brave. Sinclair praised her male protector “Then cheer, three cheers for Southern rights, and for the Southern boys.” The song ends on a somber note recognizing the sacrifice of the war “And that our tears are all for those who fill a soldiers grave.” Sinclair encouraged a man’s sacrifice in the public sphere to protect the homeland. Early in the war, women sacrificed their manufactured cloth for the war effort but later on the private sphere would have to give up so much more. “The Homespun Dress” shows the attitudes and roles of women early in the crisis. Women stayed in the domestic sphere to support their man by producing and wearing homespun.

Even after sacrificing their male kin many women wanted to take their patriotism further, but did not know how without becoming unwomanly. The feeling of uselessness prevailed among mainly upper class women due to this conflict. Numerous women found the happy medium between public and private through philanthropy.  One way women could support the war effort was by increasing household production. For example, women began to make and wear homespun clothing as a symbol for the support for the war. The northern blockade cut of manufactured cloth from the South so many women switch to rough homespun dresses. Homespun allowed women to engage in the public cause without leaving the domestic sphere of home production. [10] Charitable fundraising represented a proper outlet for female patriotism. But before the war most charitable organizations were structured around the church or family. The Civil War increased the demand for aid and allowed white women for the first time to collectively organize as women and patriots. [11] At a time when the war was treating apart the household, white women came together to support the cause. For example in North Carolina, the Sick Soldiers Relief Society of Raleigh met three times a week and donated shirts, sheets and other supplies for soldiers. White women continued their duties as caregivers for men, except now for a public cause. [12] Confederates understood the importance of these efforts, praising them in newspapers and periodicals.

In 1862 a fundraising fad swept the South. White women organized tableaux vivants or staged versions of patriotic themes by women in costume sometimes set to music. Themes represented ranged from Shakespeare to personified Confederate States. These performances allowed white women to show their patriotism to the community. The tableaus were not without controversy. Some felt the performances entered too far into the public sphere because the names of the white women appeared in the newspaper. While the debates raged on, the tableaus brought in a substantial amount of money. [13] A group of white women from Cleveland County, North Carolina, wrote Governor Z. B. Vance donating 1,000 dollars raised in 1862. The women specified that Vance distribute the money to soldier’s families. Three letters total came from Cleveland County recounting the performances, listing the actresses and describing funds.  (Items 765, 793, 795)A male relative of some of the actresses, R. M. Roark, wrote,  “The relief of the female portion of a family of refuges residing here for the time … took part in said tableaux them being largely the majority of actresses.” (Item 765) White women participated in the tableaux and organized raising a significant amount of money. The purpose of this type of fundraising was to support the social order with rich white women caring for poorer white families.

While female patriotism gave women a purpose during the war, overall it was not successful. While women like those in Cleveland County raised substantial amount of money, many fundraisers did not make a dent in the expenses of the Confederacy. Early in the war the initial zeal of patriotism helped, but as the war went on many female organizations could not even afford cloth. To compensate sometimes public and private entities combined through the war department supporting female fundraisers.  By 1863, most of female fundraisers had fallen to the wayside. The failure of female charity efforts disillusioned Confederate women. [14]

The lines between public and private blurred at the beginning of the Civil War. Early secession rhetoric emphasized white female sacrifice. Drew Faust argues that the Confederate attention to sacrifice diverted attention away from the loss of protection. Faust states, “The effective redefinition of women’s sacrifice from an emphasis on protection of family to a requirement for relinquishment of family was problematic.” Sacrifice allowed white women a way to contribute to the war effort. Women were called to sacrifice their individual protection for the protection of the Confederacy as a whole. Due to the reciprocal nature of paternalism many women expected that their sacrifices would be recompensed. [15] As the war continued women began to see that the sacrifices during the war could never be compensated.

[4] Silber, Gender and the Sectional Conflict, 15.