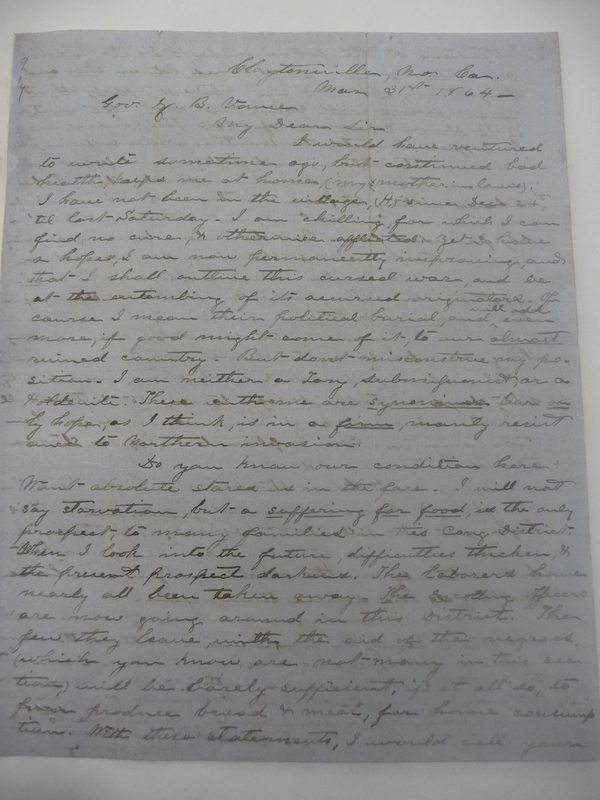 Throughout the South, women feared slaves and free blacks. Slave owning women feared slave insurrection and felt threatened without their male protectors. The Old South social norms emphasized white women’s inherent weakness and sexual vulnerability. During the Civil War, white women did not have protection from black men. Protection was a pillar of Southern society and before the Civil War the greatest perceived threat to the purity white women was black men. With the collapse of the Old South’s social structure during the war, white women’s fears increased. Slave rebellions were rare but even a rumor of a slave revolt could spread panic among the white community. In 1863, slaves reportedly murdered two prominent members of Orange County. The whites in the town were so hysterical that the local sheriff requested an early trial so the citizens would not lynch the suspects. [1] When isolated cases of slave violence against whites occurred, slaveholders feared that a violent slave rebellion was imminent. Slaveholding white women on the home front had no men to protect them from the perceived threat of slave rebellion.

North Carolina did not have a huge plantation culture like elsewhere in the South, but to the white women of the state the threat of rape or assault must have felt very real. These fears do not seem to be based on facts however. In Granville, Orange, and Montgomery counties, only two cases of attempted rape went through the courts. White women’s fears heightened throughout the war due to a loss of male protection. The Confederate government attempted to help protect slaveholding white women by passing the “Twenty-Negro Law” in October of 1862. The law allowed an exemption from the army for a white man on each plantation with over twenty slaves. As the war continued, the Confederate government was forced to control exemptions. The Confederate Congress compromised in 1863 to reduce the scope of the “Twenty-Negro Law” because of the increased demand in troops. In North Carolina 8,000 to 16,000 white women ran plantations on their own without male kin or an overseer. [2]

The fear of black men can be found in appeals throughout North Carolina. Sarah A. Elliot from Oxford, North Carolina, appealed to the governor in January 1864, charging that a “negro raid” attacked her house and destroyed her property. Elliot wanted protection from black men. There is little corroborating evidence of this “attack.” She claimed a group of black men on horses raided her property. However, in most reported cases of robbery, blacks worked individually or in small groups. [3] Mrs. Elliot could have fabricated the story or exaggerated facts. While the “raid” may have not occurred, Elliot’s fear of an attack was real to her. The purpose of her appeal was not to just inform the Governor but to ask for protection from black men.

A white woman left with only her slaves may have turned to her slaves as protectors. Many anecdotes about slaves hiding the silver and protecting their mistress from Yankees exist.  Many historians have explained these as racist Lost Cause tales. However, Thavolia Glymph argues that slave loyalty was more complex. While many slaves did escape to freedom, other slaves made a political decision “exploiting the war’s possibilities for their freedom.” In deciding to stay many slaves staged small rebellions, like work slowdowns and stealing food. After the Emancipation Proclamation, some slaves made bold moves against their mistresses, like burning down plantations. In 1863 in North Carolina many slave mistresses felt the pressure from their remaining slaves. In the beginning of the war, white women felt that the paternalistic nature of the household ensured their slaves’ loyalty. As the war continued, these beliefs faded. [4] Love wrote, “I have no confidence in the negros.” Love emphasized her lack of protection to encourage Vance to grant her wish of a discharging her husband. While there are tales of the loyalty of slaves, many mistresses did not see their slaves as protectors but as threats. Mrs. Love and other white women like her viewed their only suitable protectors as white men (Item 727). The social structure of the South positioned white men paternalistically caring for everyone under them. The paternalistic nature of white men’s protection meant there was no substitute for white women left alone on the home front.