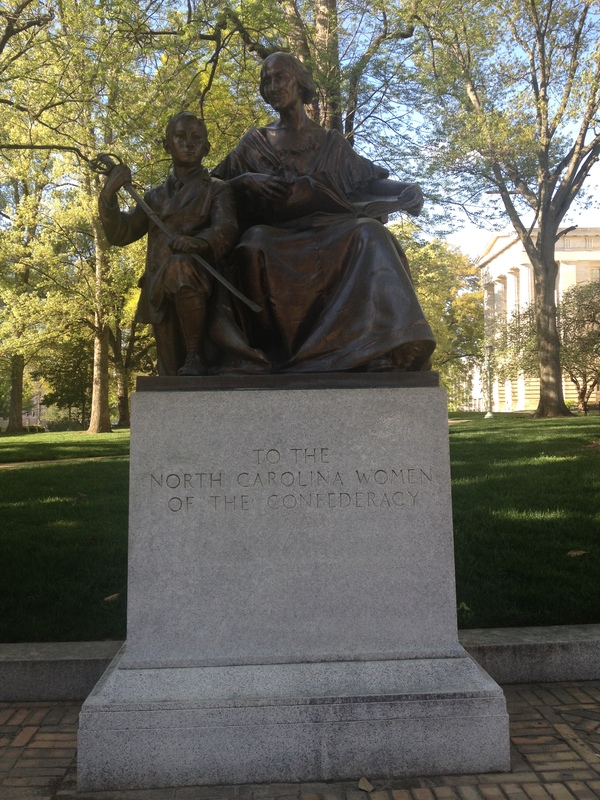 Monuments raised by women suggest women’s political involvement after the war. Ladies Memorial Associations celebrated white women’s involvement during the war as loyal citizens. In reality, white women’s relationship to the government before and during the war was more nuanced. These organizations promoted a Lost Cause narrative. Nina Silber defines the Lost Cause as “the confluence of ideas and images by which white southerners remember the causes and outcomes of the Civil War.” In the years following Appomattox white southerners shaped the perception of the war. [1] Women in memorial organizations used their position as mothers, sisters and daughters to create a largely false memory of the Civil War. The ladies memorial organizations highlight the politicization of the domestic sphere. This paper will trace the path of southern white women from dependents to political entities.

Traditionally most Civil War history focuses on battles, soldiers and politicians. While these topics are important to study, it is also important to study the social order of the South before and during the Civil War. The intersectionality of race, class and gender give us insights into the South because, society was divided along racial, gender and class lines. Recent historiography has focused on connections between the battle front and the home front.  Many historians claim that the South lost the war not on the battlefront but on the home front.  Drew G. Faust argues that the loss of morale on the home front, especially among white women, caused the Confederacy to lose the war. Gary Gallagher claims the defeat occurred on the battlefield. He downplays the importance of the home front to the loss of the war.   Many complex factors contributed to the failure of the Confederacy. [2] As the war continued, the lack of supplies on either front left both soldiers and their wives vulnerable. As troops moved throughout the South, the home and battlefronts combined signaling the total defeat of the Confederacy. This paper recognizes the importance of the battlefield, but focuses on how conditions on the home front contributed to the loss of the war. In North Carolina, both fronts contributed to the failure of the Confederate cause. It is difficult to tease out the true cause of Confederate defeat but at least in North Carolina’s case, both factors aided the collapse of the Cause.

This paper aims to use gender as a lens to investigate the social hierarchy of the South and how it changed during the Civil War. LeeAnn Whites argues that gender “provides one lens through which we experience, interpret, appreciate and judge the nature, the character and the meaning of our relations to others.” [3] Because gender is socially constructed, how these roles were reinforced and defined throughout history shows the social structure. A gendered analysis explores relationships between men and women and the invariable power asymmetry. In peace times, gender roles are stable. But, during times of conflict, gender roles change and power shifts. The war turned the South’s social structure upside down, blurring the line between men’s concerns and women’s concerns. Examining the South’s social structure at a volatile time demonstrates how integral gender was to the region. Gender gives us a window into the experiences, failures and everyday lives of men and women before and during the war that changed the South forever.

Studying the antebellum and war years shows the creation and destruction of southern society. “Home, Sweet, Home” focuses on antebellum gender roles and separate sphere ideology embraced by southerners. It continues into the early years of the war with the surge of patriotism and changing roles for white men and women. “Protect Us!” uses North Carolina as a case study to demonstrate the loss of protection and destruction of the home front. The breakdown of separate spheres shows the failure of the Confederate Cause and reciprocal obligation. The changes that the Civil War brought challenged the established race, class and gender structure of the South by undermining white men’s authority over their dependents. For a brief amount of time, gender roles became fluid during the war and the implications of these changes shaped the South for years to come.