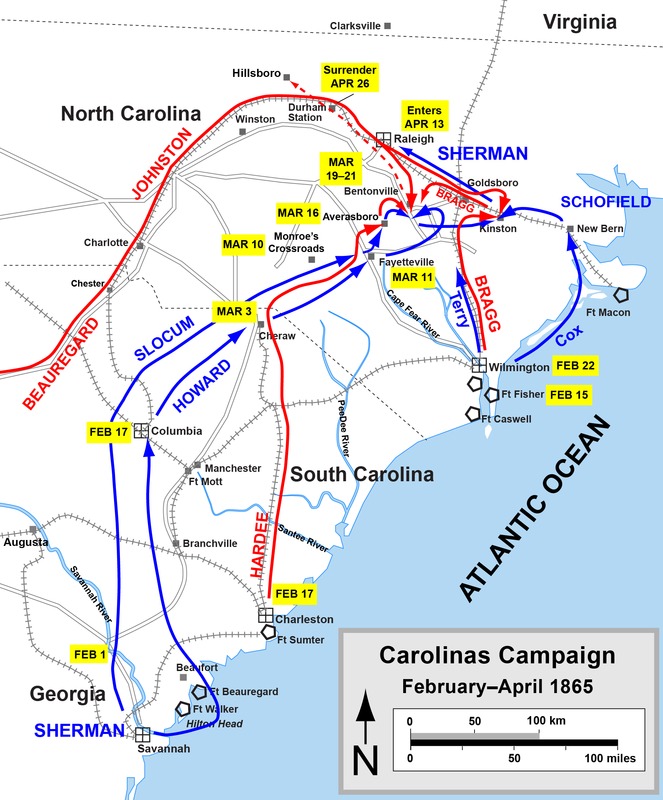 Protection from the Enemy

Union Major General Sherman began the Carolinas Campaign on February 2, 1865, thus adding another danger to white women’s lives on the home front. Union soldiers in the state only added to the chaos of the Inner Civil War. Sherman’s march affected the eastern portion of the state where he captured the cities of Fayetteville, Kinston, Goldsboro and Bennettsville. [1] Sherman’s main goal was to intimidate the civilian population and lower morale on the home front. Before Union troops arrived in the state, patriotism was already low on North Carolina’s home front. Any white men left on the home front had little chance of defending their land from the powerful Union Army. White men enlisted, in part, to protect their families from Union oppression. In 1865, white men and white women’s worst fear came true in North Carolina (Item 805). The enemy no longer existed in the abstract. Instead Union troops marched though the Carolinas. [2] Confederate men fought the war to defend their position as patriarchs and protectors. Union men occupying the state threatened everything the Confederate men fought for. Sherman’s victories represented the complete collapse of male protection. 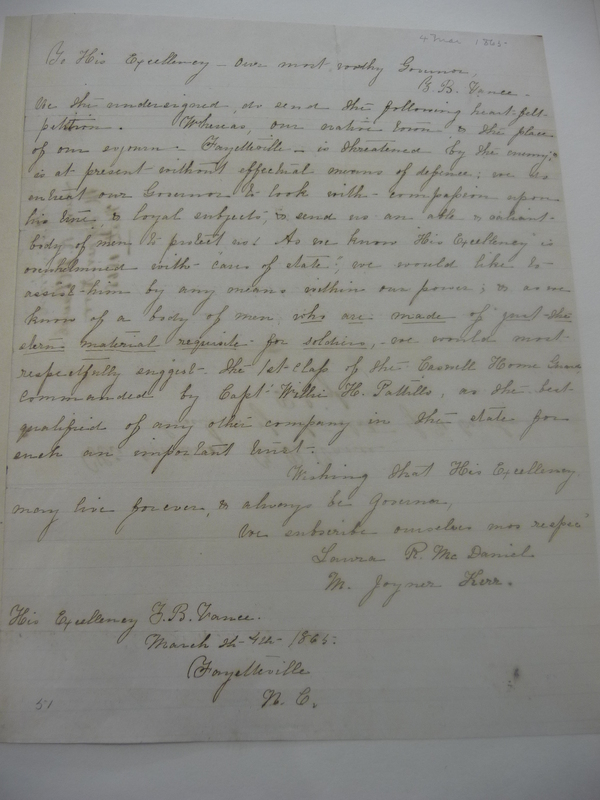 Laura McDaniel appealed to the governor for protection from the enemy on March 4, six days before the Union occupation of Fayetteville. McDaniel requested protection because “Fayetteville is threatened by the enemy; is at present without effective means of defense.” Most white men were either dead in the war or on the front. Few white men remained on the home front, leaving white women vulnerable. McDaniel asked the “Governor to look with compassion upon his…loyal subjects and send us an able…body of men to protect us!” Using her position as a woman, she wanted to persuade Vance to help the city (Item 804). At this point in the war, the Confederate army could not defend itself from the Union. Due to a lack of resources, there was probably nothing more Vance could have done to help the city. Both individual white men and the government failed white women when the Union won. Confederate men could not protect their families or their way of life. Although Union troops in North Carolina did not leave the same path of destruction that occurred in other states, they demonstrated to white women on the home front the failure of the Confederacy.