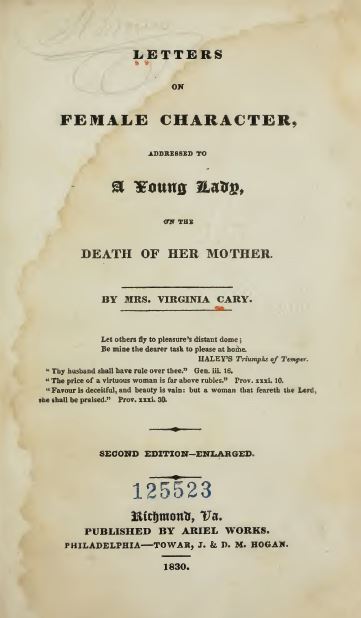 Item 854: Virginia Randolph Cary, "Letters on Female Character, Addressed to a Young Lady, on the Death of Her Mother" 1828

An example of the ways that Southern white women enforced their gender roles was through female advice books. These books permeated throughout the South though multiple publications. Letters on a Female Character by Virginia Randolph Cary, published in 1828, praised the ideals of the domestic sphere. Women, according to Cary, should depend on a male protection. Citing scripture Cary states women was “formed from man” and subservient to his authority. Cary offered a cautionary tale for women who rejected her sphere. Independent women outside of the domestic sphere caused the French revolution, according to Cary. She states, “national misery will be the result” Cary theorizes that if women would have “retained their appropriate sphere of duty” they would have “prevented the desolation of their county.” Cary used this example show the consequences from deviating from separate spheres. Female advice books helped solidify the ideology throughout the antebellum era. Separate spheres were not just gender roles but a way to keep society stable from chaos. During the Antebellum years attacks on slavery threatened chaos, but by enforcing gender norms the South held on to the rigid hierarchy.

Wealthy white women epitomized the ideals of the domestic sphere by embodying the grace and leisure their class afforded them. The term lady was racially charged in the South. The English journalist, J. S Buckingham, wrote, “a female negro is call a ‘wench,’ or a ‘woman’; …which makes the term ‘women’ so offensive to American ears, when applied to white females, who must all be called ladies.” Lady was a term for white women exclusively and usually for wealthy white women. [1]

Many elite white women in the South lived and worked on plantations. Plantations were like small factories producing raw goods. The hierarchy of the South prescribed certain roles for everyone on the plantation. White women were the mothers and the mistresses of the family.[2] Slave holding women oversaw labor within the house like the kitchen, garden and dairy. While not participating in all of the physical labor, a mistress’s work was complex.   The mistress had to procure all food not produced on the plantation. White women also had many children and were in charge of their children’s education and they alone had exclusive right to motherhood. While slave women had children, the master could tear apart their family at anytime by selling members of the family. White men protected white women’s right to motherhood. White women’s life in the domestic sphere revolved around family. First she belonged to her biological family and after marriage to her husband and children. [3] While elite white women used slave labor in the household production, elite women did not spend all their days in leisure.  Their privileged status allowed elite women to oversee instead of physically participating in the domestic sphere.

While the master controlled the plantation, the slave mistress was the administrator of domestic labor. While holding significantly less power than the master, slave mistresses had the responsibility to manage the household slaves. Even though black and white women lived in the domestic sphere, their womanhood did not unite them. The close physical proximity created tension between the mistress and slaves. Household slave women knew their mistress well and often used this knowledge to rebel against them. A successful slave mistress had to control the slaves, often implementing violence. A mistress’ main goal was a smooth running household, meaning the mistress often supervised training and assignments of slaves. Paternalism allowed slave mistresses the authority as mother over the slaves in the domestic sphere. However, this paternalism never gave total control of the plantation to the mistress. [4] 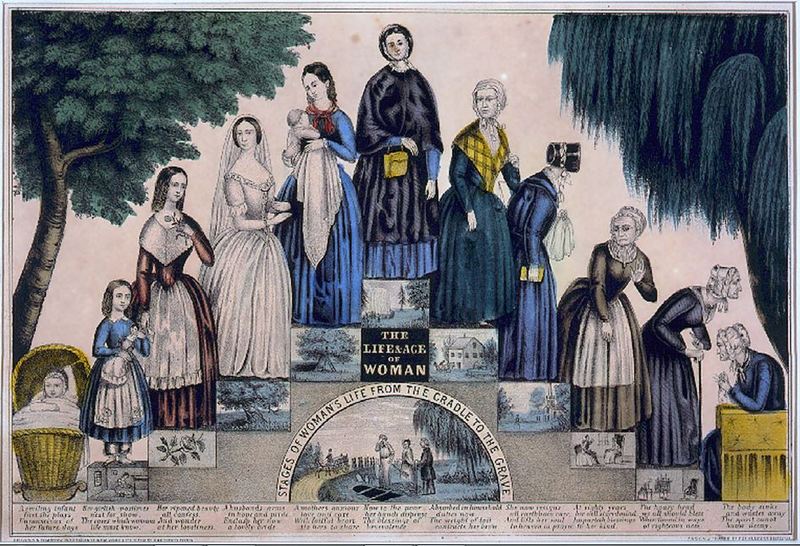 Item 849:  Kelloggs and Comstock, "The Life and Age of Woman. Stages of Woman's Life From the Cradle to the Grave"1849.

The lithograph “The Life & Age of Woman” portrays a woman’s life in the domestic sphere. It begins with a baby girl in a cradle. As the girl grows, she plays with a doll to prepare for her future as a mother. The adolescent girl holds a rose form a suitor as she prepares to become a wife. The next stage shows the young woman in her wedding, representing her leaving her biological family for her husband. The next step shows motherhood, with a woman holding an infant. At the top of the arch depicts a woman in the prime of her life as a mother and wife. The stage down shows the toll that the life in the domestic sphere takes on a woman. In the next the woman is dressed morning cloth as she becomes a widow. After that the women is shown becoming increasingly crippled and elderly. The final stage has an elderly woman knitting and waiting for death. This arch shows the ideal life for a woman in the life in the domestic sphere. It also demonstrates that as women become less useful as a unit of production and reproduction she becomes less valuable, shown here as hunched and small.  The small arch at the bottom shows her family morning her after her death, her legacy from the domestic sphere mourns her. The arch in this lithograph shows the stages of usefulness that women achieve throughout their life and the duties associated with age in the domestic sphere. Rich or poor white women’s lives in the domestic sphere had strict roles that enforced their duties as units of production and reproduction.

Life in the private sphere for elite white women meant white men protecting women from the public sphere. Elite white female delicacy and purity required male protection. Historian Fox-Genovese writes “In a dangerous world ladies required protection against unruly men, white as well as black.” This protection created the barrier of public and private. Protection isolated white women in the private sphere.  Fox-Genovese also writes, “women have only one right - the right to protection. The right of protection involves the obligation to obey” [5] Protection was a luxury for white women with strings attached. To be protected, women needed to obey a white man. Marriage shifted the responsibility of protection from a woman’s father to her husband. Sarah Gayle, a slave-owning woman from Alabama, wrote to her husband “from this moment henceforth, I acknowledge none but you as my protector in the wide, wide world.” [6]

The duties of the domestic sphere depended on the class and race of the women. Yeomen white women’s duties in the private sphere differed from slave owning women. [7] White yeoman women cooked, cleaned and cared for children as well as labored on the farm. Farmwomen had much the same duties as wealthy women on plantations with less or no slave labor. Slave owning women garnered praise for their fragile nature; in contrast, yeomen white women often were praised for their good farm and work ethic. “Hard work until the end…a female life well lived” wrote farmwoman Mrs. Henry Boughton. [8] While the type of praise yeomen women received was different from elite women, for both labor falls into the domestic sphere. Both classes of women were expected to stay within the domestic sphere, subordinate to men.

[1] Fox-Genovese, Within the Plantation Household, 202.

[2] Fox-Genovese, Within the Plantation Household, 324.

[6] Elizabeth Fox-Genovese, “Family and Female Identity in the Antebellum South: Sarah Gayle and Her Family,” In In Joy and In Sorrow : Women, Family, and Marriage in the Victorian South, 1830-1900, edited by Carol Bleser (New York: Oxford University Press, 1991), 24.