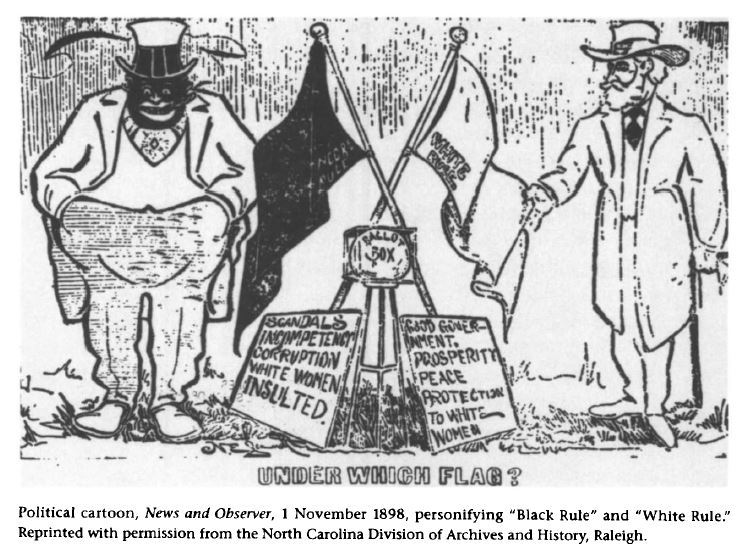 The cartoon “Under Which Flag” emphasizes the importance race and gender played in the post-war South. The cartoon depicts two candidates with their flags and platforms. The white flag has the white rule platform promising good government, peace, prosperity and the protection of white women. The cartoon characterizes black rule as scandalous, corrupt and insulting to white women. The cartoon clearly places white women at the center of the debate. Even after the war white women had the obligation of protection. White there had been a racial component to protection before the war, during Reconstruction the racial complete became more pronounced. The cartoon shows that gender was still an important part of politics even after the Civil War. The post war southern society desperately wanted to rekindle antebellum norms even after the Civil War.

By the end of the Civil War, the South was not only defeated militarily but everything the war stood for was gone. The Glorious Cause heralded in 1861 failed, leaving white women unprotected. Not only did protection fail, but also with the emancipation of slaves, the entire race, class and gender hierarchy broke. The antebellum era promised white women protection though submission, but the war left the household with no master. The end of the war brought white women the realization that men could not protect them. Most white women rejected their earlier ideas of self-sacrifice in favor of survival. Without protection, many white women began to question the social contract of protection in exchange for submission. Protection was the reason men left for the war, but it was also the reason many men deserted. The objects of obligation became a double-edged sword for the Confederacy. Most men joined for the same reason they deserted, to protect their household. Not only did the Confederacy lose the war on the battlefront but they lost support on the home front as well.

The war blurred the public and private spheres and utterly destroyed the ideal created during the antebellum era. A failure to protect the domestic sphere meant that white women were forced into the public sphere as objects of obligation and soldiers’ wives. White women without white men had to become the protector of household upsetting the hierarchy. The letters from North Carolinian white women demonstrated white women’s loss of protection. The women utilized their status as soldier’s wives to move into the public sphere to try to gain protection. The white women who wrote to the Governor understood their positions as soldier’s wives to ask the government to protect them. The petitions created a relationship between white women and the state, moving women into the public sphere. The antebellum ideals of public and private sphere failed under the strain of the Civil War.

The loss of white male protection had significant effects on post war developments and the memory of the Civil War. After the war, many southern white women participated in the propagation of Lost Cause ideology. The ideals of the Lost Cause echoed the calls of protection during the secession crisis. The Lost Cause emphasizes that the Confederacy fought for “home, sweet home.” While this is true, the concept of home changed drastically from the antebellum to the late nineteenth century. In the 1860s, home was part of the old South’s race, class, and gender hierarchy, and after the war the household did not function in the same ways. The Lost Cause focused on the idea of fighting for home because it eliminated slavery as a basis for the Civil War. Confederates fought the Civil War to protect their households as an economic unit and the dependents, both free and enslaved, included in that household. The goal of the Lost Cause for white female organizations was to rebuild white masculinity and protection. White female organizations romanticized the war to obscure the true causes and the true failures during the war. Ladies Memorial Organizations gained momentum in the 1870s through the 1890s. This would seem to mirror the women’s organizations of the North post-war, but southern female organizations did not have the same goals as their northern counterparts. In the South, white women occupied the paradoxical political domestic sphere. LeeAnn White argues that the ultimate goal of Ladies Memorial Organizations was to reconstruct southern white masculinity. [1] The Civil War reinforced female weakness and altered a social structure based on their protection. The war destroyed the South’s social hierarchy white women sought to recreate some of the antebellum norms. While not completely successful, the pervasiveness of the monuments and Lost Cause ideas throughout the South shows the power of the political domestic sphere throughout the post-war South. Much of post-war social development tried to create a racial and gender structure with white men as protectors of white women.

The failure of male protection during the Civil War is important because much of postwar white supremacy was built on the protection of white women and the reconstruction of white men as patriarch. Throughout the South, white women’s protection stayed at the center of political debates.  The Ku Klux Klan used white female protection as a justification for its racial violence. White women could not participate in Klan actives but their protection validated violence against blacks after the Civil War. Of course, this protection only applied to white women because, sometimes Klansmen assaulted or raped black women. [2] The Democratic Party used propaganda encouraging the protection of white women from black men during the Wilmington Race Riots in 1898. The campaign depicted black men as animalistic rapists preying on white women. The community viewed any interaction between black men and white women as overtly sexual. This campaign was highly effective as white supremacists took power in Wilmington. [3] A good example of white women’s post war political was in turn-of-the-century North Carolina. Young white women held banner stating “Protect Us” in a parade in support of a candidate against black enfranchisement. [4] White women continued to use their positions as white women for political power.

The Confederate women’s monument in downtown Raleigh starts a conversation about rebel women’s participation during the Civil War but erases reality. The war was a fight for survival for most white women in North Carolina. White women rioted, petitioned and pleaded for their survival during the war. The monument heralded white women’s actives as heroic but through my research, I believe a majority of actions white women participated in during the war were out of desperation not heroics. Without their male kin, white women struggled to protect their family, something under Old south ideals that should have never happened. The Lost Cause dismisses their struggles for a romanticized version of history. This version of history has permeated pop culture with pieces like Gone with the Wind. In reality, the horrific home front conditions of the Civil War  tore apart the social fabric of the South.