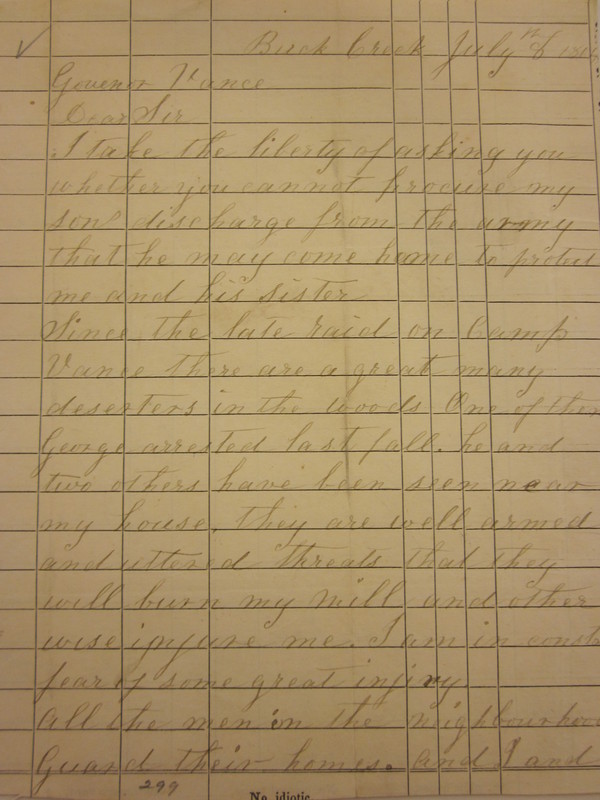 As the Inner Civil War hurt both sides of the conflict, as well as neutral parties, loyal Confederate white women used their position as female patriots appeal governor. Catherine Carson wrote to the governor in July of 1864 from Buck Creek. She requested that the governor discharge her son from the army so he could protect her and her daughters. She describes, “there are a great number of deserters in the woods.” The deserters threatened to attack her mill, she stated, “others have been seen near my house they are well armed and issued threats that they will burn my mill.” (Item 743) Carson’s letter clearly states the danger she felt during the Inner Civil War. Her son needed to be home to protect her family from the deserters. Carson attempted to use her position as a helpless woman to convince Vance to help her by appealing for him to be a gentleman. Without her son, Carson’s family was at risk to become the next casualty in the Inner Civil War. 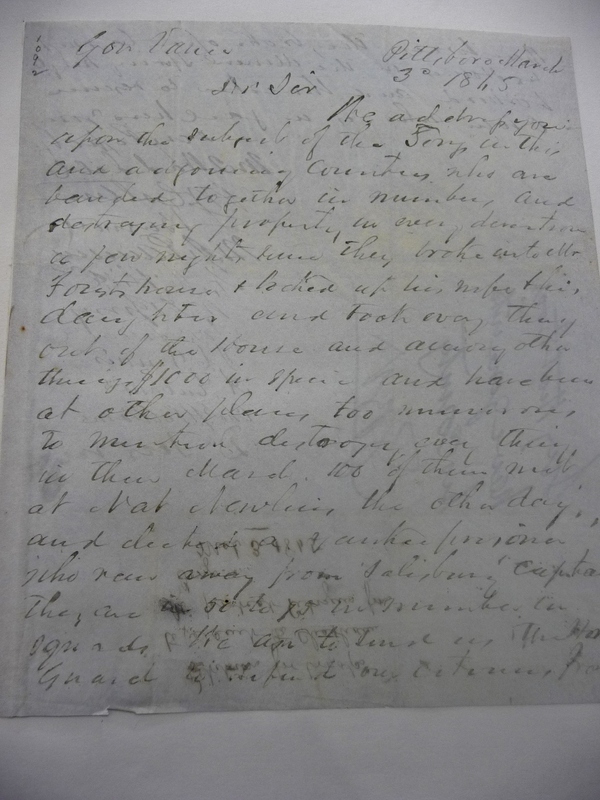 Item 796: Letter from The Citizens of Pittsboro to Zebulon Baird Vance, March 3, 1865

Desertion in some parts of North Carolina was so severe that whole towns appealed to the government to protect them. The town of Pittsboro petitioned the government to protect them from deserters. The petitioners claimed that one hundred deserters created 1,000 dollars in property damage. Twelve members of the community signed the petition (Item 796). As desertion increased, resentment built between loyal citizens and the deserters. Families who lost kin in the war especially resented the deserters thus furthering the conflict. The petition from the citizens of Pittsboro showed the dangers of the Inner Civil War. The Inner Civil War was not just a couple of scrimmages in western North Carolina. By 1865, the entire state was overrun with violence and destruction. [2] In towns like Pittsboro, the violence of the Inner Civil War threatened communities even more than the larger Civil War. Men lost to death and desertion in the larger war created a situation in Pittsboro and around the state, where the government would have to intervene to protect the citizens. Loyal white women and families used their patriotism to plea for help from the government, but the other side of the conflict openly disobeyed the government.

The Home Guards were dangerous to white women on the home front. The Home Guard harassed white women for information on the deserters. White women who chose to harbor deserters became easy targets because their roles as mothers and wives kept them at home. The Laurel Valley Massacre occurred in January of 1863 when a group of men raided a salt storage facility. The Home Guard killed fifteen men throughout the valley without a trial. Nancy Franklin, a Piedmont yeoman class white woman, was caught in the cross hairs. The Home Guard surrounded her house and killed her sons while she watched. Some reported that members of the Home Guard tortured the women in the valley for information. White women wanted their male kin home to protect them but this could put them in even more danger. When the Home Guards complied with their duty to protect the home front the result was the loss of the valley’s male protectors. [3] 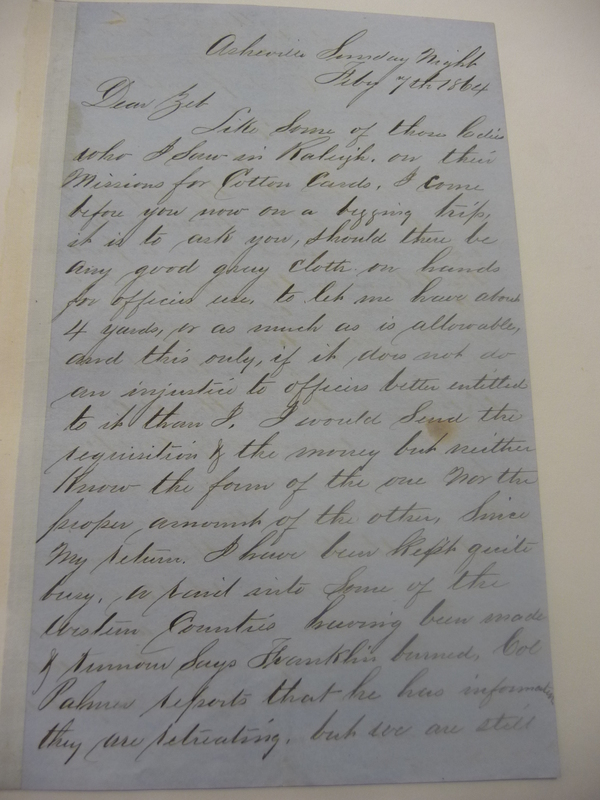 While many white women wrote to the governor to protect them from deserters, many other white women also encouraged their husbands to leave the army to protect them. A man named Murdoch wrote to Vance say that a widow named Burris “is a rank Tory and has been harboring deserters.” The deserters she hid were her sons (Item 747). Murdoch characterized widow Burris as a traitor but the men she was harboring were her kin, not random strangers. Most white women did not see the hiding of deserters as a political move but as a way of supporting their family and receiving protection. The Confederate government understood the important influence  that white women had on desertion. One Confederate General from North Carolina stated, “Desertion takes place because desertion is encouraged…And though the ladies may not be willing to concede the fact they are nevertheless responsible.” White women who chose to harbor deserters became easy targets because their roles as mothers and wives kept them at home. The Home Guard harassed white women for information on the deserters. [4] Encouraging desertion and hiding deserters breached separate spheres by involving white women in the public world of war. However, white women did not see desertion as an overtly political action but just as another way to protect family. These paradoxical notions are characteristic of how gender roles during the Inner Civil war broke down.