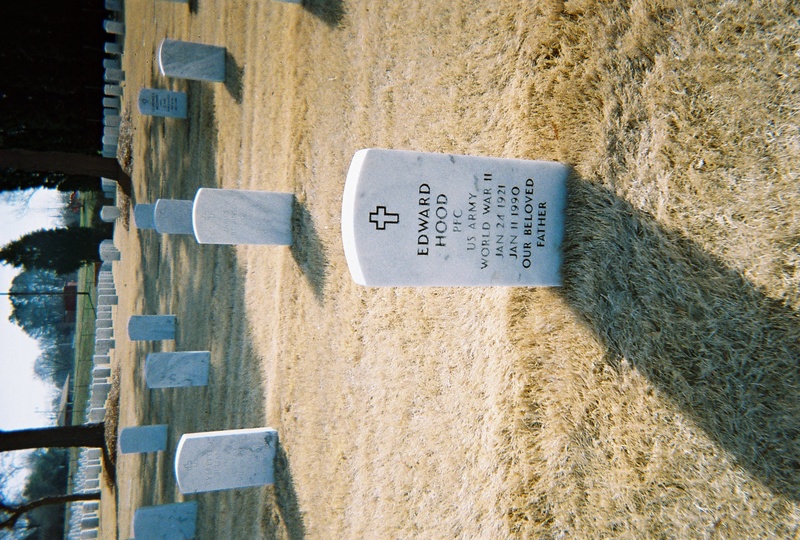 A World War II veteran, Edward Hood's grave does not mention what state he lives in. Instead the marker shows what branch of the military Hood served in, and celebrating the national rather than sectional.

The World Wars: Recognizing the Commonality of Atrocities

The World Wars altered America’s relationship with the Civil War, prisons and atrocities. Like the Spanish American War the joint, national, sacrifices of American citizens through war helped alleviate the still memorable wounds from the Civil War. Unlike the Spanish American War, graves from the World Wars did not list the state where veterans were born in. Instead the person’s the markers only hold the name, rank, birth and death dates and branches in which the soldier served. Truly the national had finally trumped the sectional.[1] Except for the Civil War, the largest numbers of soldiers buried at Salisbury National Cemetery were veterans of the two World Wars. Those interred at Salisbury are represented from the entire country, not any one section. World War II had a powerful influence on how Americans viewed Civil War prisons. If the horrors of the Second World War proved anything, it was that all societies are capable of barbarity. The experience of captured soldiers in Axis hands—in the Philippines, France and South-East Asia—along with the horrific abuses between the Germans and Soviets, convinced many Americans that POW systems were easily abused.[2] The awful state of prisons during the Civil War could be seen as an outgrowth of the horrors of war, not an intentional strategy.

World War veterans were recognized across the country as heroes. Their sacrifices, like the US dead at Salisbury, were given for a greater good. This common understanding helped transform Salisbury National Cemetery into a shared space and exorcise the remaining sectarian angers over the Civil War prison.