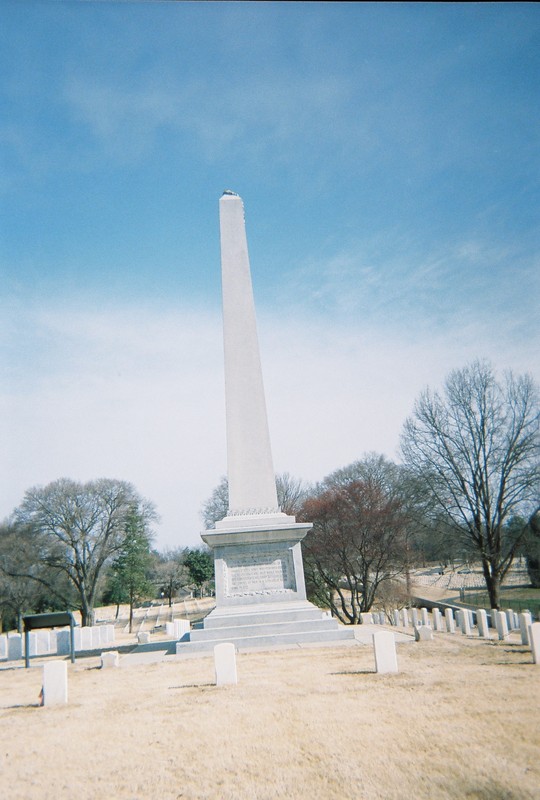 This crooked photo of the Federal Monument shows the three dozen memorial was built to remember the dead US POWs, celebrate US victory, and curse the Confederate prison system. 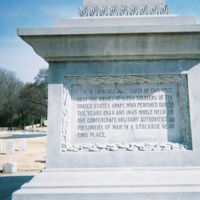 The front panel of the Federal Monument describes a number of dead at 11,700 and inherently criticizes poor administration and potentially intentionally actions by the Confederate government. 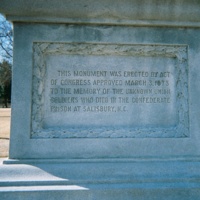 The Federal Monument was paid for by Congress for unknown, and un-counted, dead prisoners.

The Salisbury obelisk symbolizes the issues of Confederate war guilt and United States triumphalism. Built in 1876, the Federal Monument was built, “TO THE MEMORY OF THE UNKNOWN UNION SOLDIERS WHO DIED IN THE CONFEDERATE PRISON AT SALISBURY, NC.”[1] Though little archaeological work had been done to verify the number of bodies buried in the Salisbury trenches, the official death toll written on the obelisk remained 11,700.[2] Such a high number represented the ardent belief that the Confederates had intentionally abused prisoners through starvation and neglect. Within ten years, after significant archaeological work and attention to the number of prisoner who went through Salisbury the death toll would be dropped to just shy of four thousand, a three hundred percent decrease! Yet no attempt was made to amend the Federal Monument for over a century. The earliest claim had lasting power—by inscribing that claim permanently, the US government made the high number permanent.

The Federal Monument did nothing to contextualize the prison system, instead foisting all the blame on the “CONFEDERATE MILITARY AUTHORITIES.” Importantly, the prisoners were compared to soldiers killed in combat since the prisoners “DIED THAT THEIR COUNTRY MIGHT LIVE.” Unlike battles, however, the prison was built only honored United States soldiers and accused the Confederacy of their treatment.[3]

The monument was also a triumph for those who suffered at Salisbury. On top of the obelisk sits a laurel wreath symbolizing the 1865 victory. Other images of conquest adorn the base of the Federal Monument—a sword, shield helmet and broken chains.[4] The first three were obvious allusions to the soldiers held at Salisbury, while the shattered chains could mean either the prisoner’s freedom or Union victory or the emancipation of millions of enslaved men and women throughout the South.