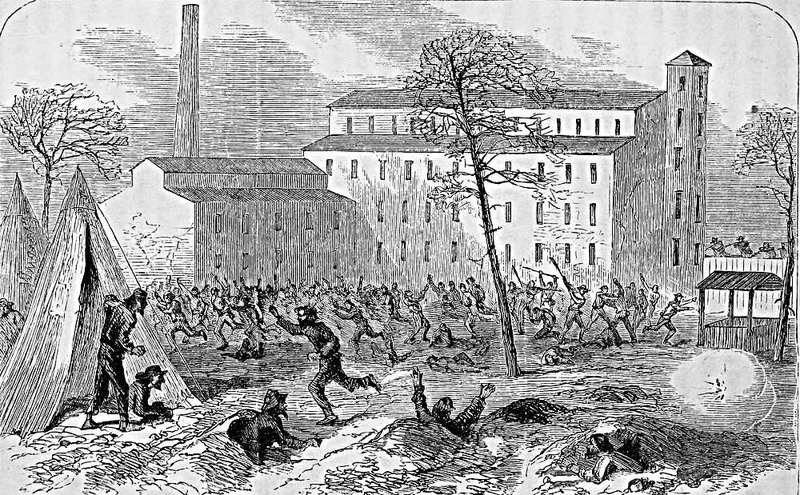 In November 1864 thousands of POWs attempted to breakout from Salisbury prison. They failed and between 80 and 200 were killed in the process.

In 1864 the Salisbury prison turned into a horrific cesspool. Prisons in Richmond were overflowing with US soldiers, and the Confederate government hoped to shift some of the burden to North Carolina. In October 1864 more than 10,000 blue-coated internees were transferred to Salisbury, overwhelming the poor infrastructure.[1] Salisbury was never meant to hold so many. The prison was even less suitable than Andersonville: Salisbury had no creek running through it for interned men to deposit their waste. Prisoners in North Carolina instead excreted on the prison grounds, creating an infectious environment. Major John Gee, commanding Salisbury, was as overwhelmed as the infrastructure—he could not get the 13,000 rations a day needed for the prisoners who soon began to starve. Meat quickly vanished from the prisoner’s diet, and the bread ration was reduced to almost nothing.[2] Thanks to their weak physical condition, the disease from piles of human feces cut through the prisoners and killed thousands.

There was also abuse at Salisbury. Prison guards were accused of assaulting, torturing and murdering the captured men. Starving enlisted prisoners were driven made with hunger, stealing rations from weaker inmates. Men dying from hunger killed and ate rats, dogs and cats in the area and scavenged the trash piles. Some prisoners accused the Camp Commandant, Major John Gee of willfully denying the inmates food, despite the availability of food nearby.[3] The terrible conditions inspired several escapes; the largest was a full scale riot in November 1864, “The desperate men acted solely on the impulse of the moment. It was an ill-advised futile attempt,”[4] reported one prisoner. It involved more than two-thousand men and only ended when guards opened fire with artillery and rifle fire. One hundred prisoners died in the attempt.[5]

[3] Alfred Richardson, The Secret Service, the Field, the Dungeon, and the Escape [Hartford, Conn: American Publishing, 1865], 417.