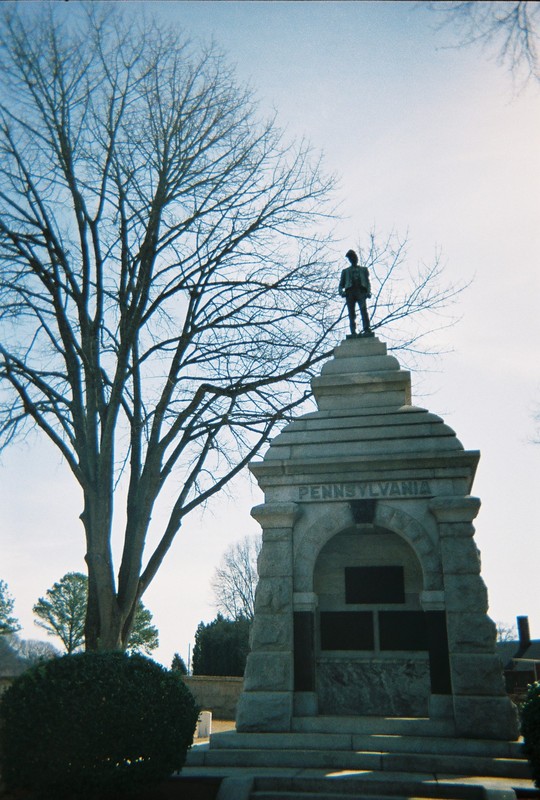 The Pennsylvania Monument was built in 1909 and was dedicated to the Commonwealth's dead. Inside the rotunda were inscriptions celebrating Pennsylvania civilians and soldiers throughout American history.

Built forty years after the federal obelisk the state monuments focused on reconciliation and honoring dead prisoners. The monument, erected in 1909, represented the end of triumphalism at Salisbury: “THE COMMONWEALTH OF PENNSYLVANIA ERECTS THIS MONUMENT TO PERPETUATE THE MEMORY OF THE DEAD AND NOT AS A COMMEMORATION OF VICTORY.”[1] A large memorial at Salisbury, the Pennsylvania monument is a roofed structure with an unarmed soldier on top. Pennsylvania’s Monument was all about honoring the 736 soldiers from the commonwealth who died at Salisbury. The prisoners were compared with armed heroes at Valley Forge and Gettysburg and “A GRATEFUL COMMONWEALTH RENDERS THE TRIBUTE TO THEIR HONOR AND MEMORY.”[2] What was missing from Pennsylvania's memorial were criticisms of the former Confederacy or triumph. 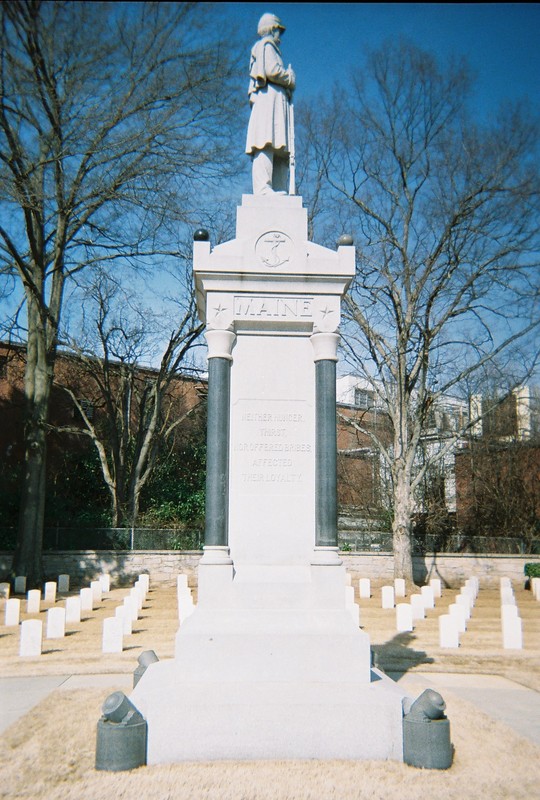 The Maine memorial, much like the its Pennsylvania predecessor, was built around honoring Maine soldiers who died for their nation in the prison without criticizing the former Confederacy. J Bryan Grimes' speech was poorly receieved when he attempted to defend Confederate policy and damned Union actions during the war.

The Maine Monument, constructed in 1907, was devoted to reconciliation and remembrance. At the peak of the monument stands a Maine soldier at parade rest. His gun is not aimed at anyone instead it rests at his feet. Each branch of the military—the artillery, cavalry, infantry and navy—was represented on the base. Re-union was all important and along the front of the monument was written “ONE COUNTRY-ONE FLAG.”[1] The main inscription regarding the prisoners reads, “THEY FOUGHT FOR PEACE, FOR PEACE THEY FELL, THEY SLEEP IN PEACE, AND ALL IS WELL.”[2] Like the Pennsylvania monument, the Maine memorial honored the dead by arguing that they helped bring about victory. This was a powerful change from earlier post-war blaming scenarios.

The dedication speech was given on May 9, 1908 by J Bryan Grimes, the son of a Confederate General, which defended the treatment of US prisoners. Speaking to a northern audience Grimes said “[the Confederacy] could not feed our soldiers, and we could not feed our prisoners as they should be fed.”[3] His most controversial statement, however, was that “the Confederate Government was not entirely responsible for the great sufferings and death in these prisons. Our Confederate authorities made overture after overture to the Federal Government to exchange prisoners, but they were steadily refused.”[4] To Grimes and many other southerners blame for the terrible prison conditions lay entirely with the United States and not the Confederacy.       Grimes speech was met with anger from the Maine attendees. They demanded that he publish the speech and make his claims official.

While Grimes speech was poorly received, northern visitors were surprised at the warm welcome they found in Salisbury. The mayor of Salisbury, former Confederate soldier A.H. Boyden, did his best to treat Grand Army of the Republic (G.A.R.) members with respect. Boyden declared that “the season of heated blood has passed.” A Maine dignitary visiting Salisbury reported that “only the kindliest feelings existed” now between the North and South.[5] The Salisbury National Cemetery was transforming the animosity from the former prison into new ideas of reconciliation.

[1] Photo of the Maine Monument

[2] Photo of the Maine Monument